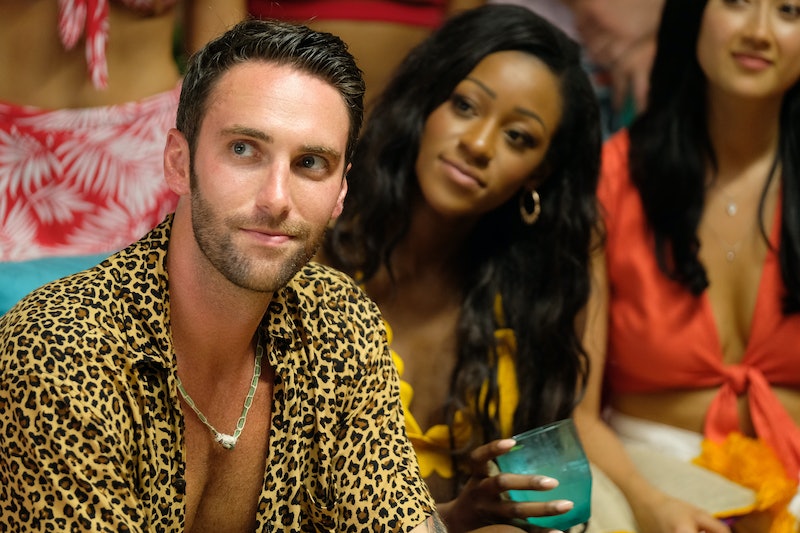 Cam has been the kind of awkward ever since fans met him on Hannah Brown's season of The Bachelorette, and it seems like that behavior is definitely continuing on Bachelor In Paradise... and this time, Caelynn is the object of his affection. On Monday night's episode, Cam's conversation with Caelynn on BIP was way too intense for the level they should be at after just meeting, and somehow, it got even cringier than it was last week.

Cam has been talking about how he's determined to find a wife and the mother of his children in paradise, and he currently has his sights set on Caelynn. This means he took her aside to talk, and read her a letter he wrote for her that made Caelynn visibly uncomfortable.

"I want you to always feel safe, comfortable, and protected with me moving forward. As I'm recapping the day, I lick my lower lip and your jalapeño-rita spice still lingered and it brought me such joy. Know that I'll always defend you and be your biggest Cam fan. Don't let these stupid buttheads bring you down."

In true Always Be Cam tradition, of course, he used his own name in one of the phrases he used. But that's not the point. The point is that Cam has learned nothing about how coming on too strong just doesn't work... especially within days of meeting someone for the first time.

Caelynn's reaction to the whole thing pretty much said it all:

And this Kim Kardashian photo really sums up what has to be Caelynn's feelings on the matter, even though she's been really nice and polite to Cam regardless of what he's thrown at her:

Because everything he was saying about the future — again, to a woman he just met — was a lot, to say the least.

And really, seeing Cam get so emotional and stare out into the ocean was too much.

For a lot of people, the very fact that Cam was given the opportunity to write a long letter to Caelynn was where he went wrong:

And former Bach star Diggy Moreland also commented on the situation, wondering if Cam is like this with all of the women he dates, or if it's just something he's recently developed.

Although his actions have been a bit cringeworthy, it really does seem like Cam's a good guy. He's nice to everyone he comes into contact with, and he really does seem to want to find the right person to settle down with. Hopefully, that person will come along for him — and maybe they won't see Cam as coming on too strong, because they'll like him for who he is when he's just being himself.

But until then, maybe Cam should dial it back a bit, because he's not doing himself any favors, especially where Caelynn is concerned. And maybe leave that leopard shirt hanging in the closet, just to be safe.