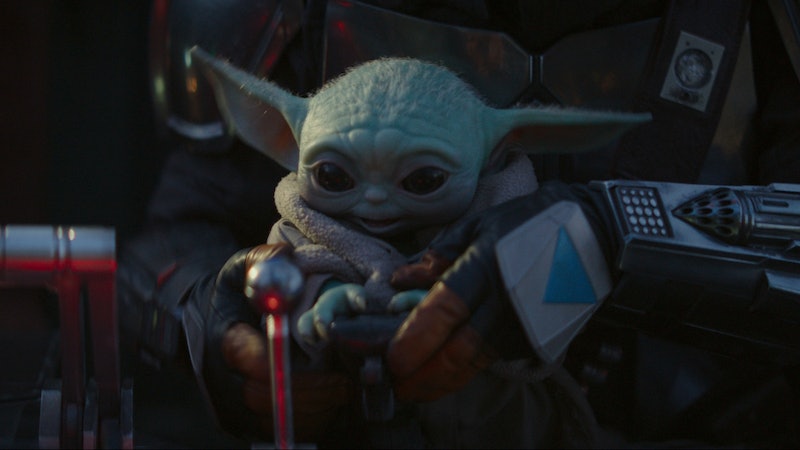 Baby Yoda may be one of the most beloved creatures within the Star Wars franchise right now, but there's still so much about the character fans (and Mando) have yet to discover. However, the only one who may be able to shed some light on the matter is Baby Yoda and, unfortunately, he has yet to utter a single word thus far. In fact, it's unclear if Baby Yoda can talk on The Mandalorian, and if that is the case, what language would it be in? So far he's just cooing and twitching his little ears, though he seems to understand English when Mando or anyone else talks to him. Just imagine if could utter a couple words back and have some conversations with Mando. It would be like a cuteness explosion.

Almost nothing has been revealed about Baby Yoda's backstory apart from the fact that he is 50 years old. It's possible he is connected to the original Yoda in some way, a clone, or is just the same species. (Baby Yoda theories are certainly not in short supply.) But with such little information out there, it's difficult to know why this creature is so important to so many powerful (and seemingly evil) people. If Mando could actually sit down and have a talk with him, that could really help to clarify a few things.

Clearly Baby Yoda is very smart. He knew to use the Force when Mando needed help and understands when he is doing something Mando doesn't want him to — like adorably playing around with the aircraft controls — but then continues to do it anyway. The kid obviously has a sense of humor.

So there's definitely some form of communication that has been established, but a little more would be even better. Does Baby Yoda know why these bad people are searching for him? Does he have a family and knows where they are? These are all questions that could easily be answered with just a little dialogue.

Additionally, it'd be nice for Mando to be able to signal to Baby Yoda when he needs him to use the Force during dangerous situations. That definitely would've been helpful during the battle with the Klatoonians and the AT-ST — that is, if Baby Yoda is able to use the Force on command at all. Something else he could maybe clarify.

This character is still such a huge question mark and now that we're already halfway through the season, time is running out to get answers — any answers! — about his backstory and history. So if there was ever a time for Baby Yoda to utter his first word, it would be now.