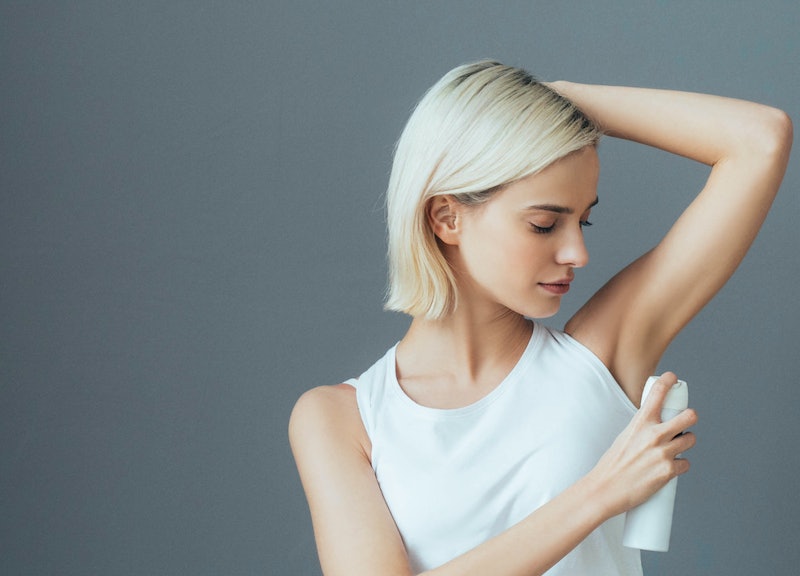 During the summer, it's common to worry about body odour. It's almost impossible to avoid sweating in the increasingly humid British weather, after all. While unwanted bodily scents are usually easily remedied with a spray of antiperspirant, some may linger due to a more serious cause. Here's what you need to know about body odour and underlying health conditions.

Although body odour often comes hand-in-hand with sweat, it's not the sweat that results in the smell, explains pharmacist Shamir Patel, the founder of online pharmacy site Chemist 4 U. "Sweat itself is virtually odourless (to humans)," he says, adding: "It's actually the bacteria — mainly in the apocrine glands — that is caused by the presence of sweat and the breaking down of sweat into acids that causes unpleasant smells."

The likes of poor hygiene and exercise can contribute to "heightened" odour, notes Patel, but he points out "it is a relatively common problem, and is nothing to be ashamed or worried about."

In some cases, however, there is a deeper problem. Patel says conditions that cause excessive sweating can be to blame. Mental health issues such as anxiety and stress are two possible factors along with things like menopause, tuberculosis, diabetic hypoglycaemia (low blood sugar in people with diabetes), and even a heart attack.

Skin infections can also trigger lingering body odour, says Dr. Rick Woodin from ZO Skin Health UK. "This is because bad body odour is a by-product of bacterial growth with dying tissues such as gangrene omitting an offensive smell." This kind of issue is likely to be much more noticeable, but other infections may not be — especially ones concerning the feet.

According to Dr. Woodin, consistently smelly feet could be a sign of athlete's foot. He describes this as a "fungal infection that occurs when people's feet are too sweaty for too long in a confined space." Symptoms include dry, flaky patches around the toes, redness, blisters, and, of course, odour.

It's not just places like feet and armpits that can emit a smell. "Pungent urine can be a sign of more serious health conditions such as kidney failure," notes Dr. Woodin. But it may also be a "minor cause for concern and simply be a common urinary tract infection. This is why it is best to always consult a doctor should you feel as though your body odour is worrying."

Occasional smells down there tend to be completely normal. But if you feel like your vagina is emitting a strong fishy scent, you may have bacterial vaginosis, according to the NHS, or a rarer condition called trimethylaminuria. In either case, a GP will be able to help.

Even your breath can be affected by an underlying issue. "Halitosis — bad breath — is worsened by factors such as smoking and, in some cases, infection or ill health i.e. tonsilitis," explains Alastair Fry, consultant oral and maxillofacial surgeon at London Bridge Hospital. But it is "also common in people who eat a lot of soft food due to papillae (which coat the tongue) becoming very long, trapping debris and bacteria."

Eating lots of "roughage" — also known as fibre — in the form of things like raw vegetables will rub away the papillae, adds Fry. "Most of us don’t eat as much roughage as we should, so tongue cleaning as part of your twice daily oral health regimen is a good idea.”

Body odour caused by an underlying health problem will require a doctor's visit. But regular odour can be managed in a number of ways. Patel recommends looking into a stronger antiperspirant to block sweat glands ("not the typical ones you pick up off the supermarket shelves"), rather than deodorants which typically just mask the smell. "You might also want to try soap substitutes for antiperspirants; these are more environmentally friendly and are often kinder to sensitive skin."

Talcum powder can be used on feet and other areas prone to sweating. Other advice, says Dr. Woodin, includes keeping "sweat zones as dry as possible by towelling off well", eating a healthy diet, and trying "to limit your carb intake in order to sweat a more pleasant smell." Finally, he says, "maintain a healthy hygiene routine by doing the basics. Shower everyday, keep your clothes clean, and brush your teeth twice a day. It sounds obvious, but people often overlook the basics more than you think."

More like this
Here’s Where The NHS Nurses’ Strike Currently Stands
By Sophie McEvoy
TikTok Has A Genius Old School Hack For Saving Money
By Sophie McEvoy
Ben & Jerry’s New Sundae Flavours Are A Chocoholic’s Dream
By Sophie McEvoy
What The UK Blocking Scotland’s Gender Recognition Bill Means
By Sam Ramsden
Get The Very Best Of Bustle/UK
Sign up for Bustle UK's twice-weekly newsletter, featuring the latest must-watch TV, moving personal stories, and expert advice on the hottest viral buys.