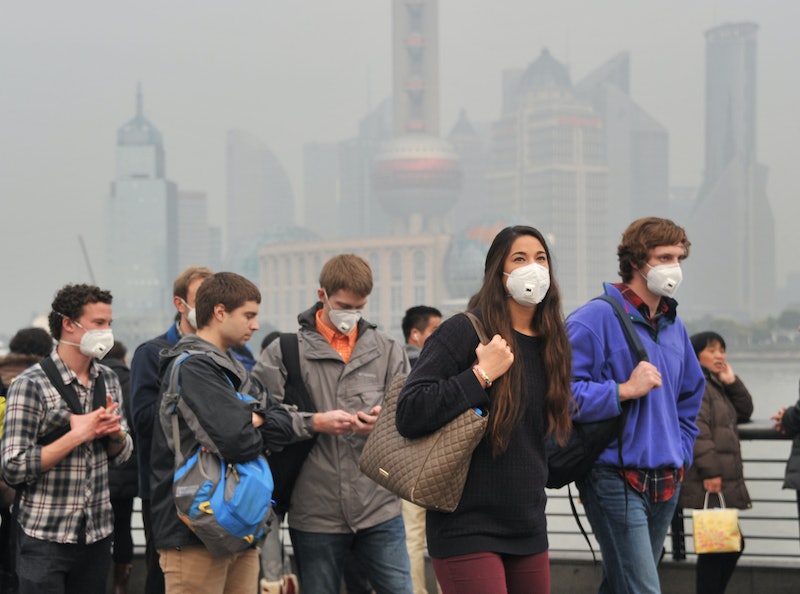 When it comes to menstrual cycles, everyone is different, and having an irregular cycle doesn't necessarily mean you need medical help. But a new study pinpoints a troubling cause for irregular cycles: you're more likely to have an irregular period if you breathed in polluted air as a teenager, according to research published in journal Human Reproduction. Air pollution is damaging to the environment and to our health — pollution is one of the leading causes of premature death, according to a study from 2015, and it's getting worse thanks to climate change. According to the U.S. Environmental Protection Agency, climate change affects the quality of our air, and researchers don't fully know the extent yet. It's reasonable to assume that as air pollution worsens worldwide, climate change may indeed affect our periods in surprisingly profound ways.

Researchers from Boston University Medical Campus and Harvard School of Public Health analyzed data from 34,832 women and compared menstrual cycle irregularity to exposure to air pollution during their high school years. As pollutants increased, so did the chances of period irregularity. The explanation for this is simple but sobering, according to the study: "The menstrual cycle is responsive to hormonal regulation. Particulate matter air pollution has demonstrated hormonal activity." Essentially, pollutants can affect our bodies in unexpected ways. A 2017 study found that air pollutants can change our metabolism and increase stress, and this new research provides additional evidence to support the idea that pollutants can interfere with our hormones.

Air pollution disproportionately affects people in low-income communities, according to a study funded by the National Institute of Environmental Health Sciences. And in the U.S., race also plays a factor — neighborhoods that are mostly Black, Latinx, and Asian are more likely to have poorer air quality, per Scientific American. HuffPost explored this in an investigative piece published earlier on Jan. 23 — in one predominately Black neighborhood in Orlando, the pollution is so bad that it can hurt to breathe. Additionally, poor people are most affected by climate change, according to a United Nations report. "Evidence is increasing that climate change is taking the largest toll on poor and vulnerable people, and these impacts are largely caused by inequalities that increase the risks from climate hazards," the report says.

Stress and diet are two other things that can affect your period regularity, and the American Psychological Association has reported that people who make less money are also at risk for higher stress levels. When it comes to diet, those with low socioeconomic status often live in food deserts, or areas without grocery stores or access to fresh foods. From the Food Empowerment Project:

Studies have found that wealthy districts have three times as many supermarkets as poor ones do, that white neighborhoods contain an average of four times as many supermarkets as predominantly black ones do, and that grocery stores in African-American communities are usually smaller with less selection. People’s choices about what to eat are severely limited by the options available to them and what they can afford.

This is the crux of the issue: The factors that can affect your menstrual cycle — diet, stress, air pollution — are things that minorities and low-income families struggle with at disproportionate rates. This new research is troubling regardless of how you look at it — it's a reminder that climate change is real, and it's affecting our bodies in worrying ways. But it's also a reminder that marginalized people face a higher risk when it comes to health and environmental issues, and vulnerable populations will feel the impact of worsening air quality.

More like this
Wimbledon Alters All-White Kit Rule Amid Candid Period Discussions
By Catharina Cheung and Rachel Mantock
Iran Has Issued A Death Sentence Over Mahsa Amini Protests
By Catharina Cheung, Darshita Goyal and Maxine Harrison
Amanda Gorman Shared A Powerful Message On Meghan Markle’s Penultimate Podcast
By Darshita Goyal
10 Thanksgiving Alternatives You Can Celebrate This Month
By Katie Mitchell
Get Even More From Bustle — Sign Up For The Newsletter