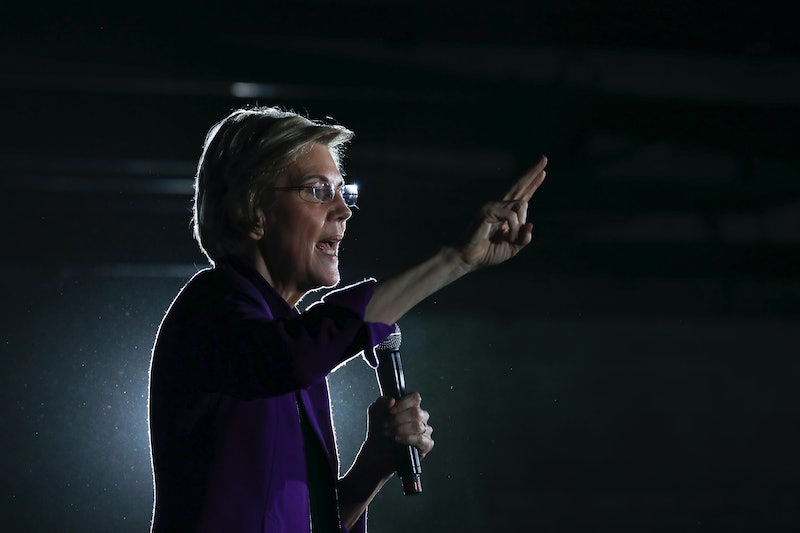 Sen. Elizabeth Warren made waves on Monday for proposing something many Democrats have wanted for quite some time: the abolishment of the electoral college. It's thanks to the electoral college, after all, that Republican nominees were elected president in 2000 and 2016 despite being rejected by a majority of American voters, and Warren's proposal may have you wondering if Congress can actually abolish the electoral college.

The answer is no, not really. The body is enshrined in the Constitution, so abolishing it would require a constitutional amendment. And although Congress does have a role in amending the Constitution, federal lawmakers don't have the option of doing this on their own. Most of the decision lies with the states, which means the Electoral College can't be abolished until the states — specifically, three-fourths of them — decide to do so.

Per Article V of the Constitution itself, there are two ways in which America can begin the process of amending the Constitution. First, the proposal to amend the Constitution must be approved either by a two-thirds vote in both the House of Representatives and the Senate or, alternatively, by a constitutional convention called for by the legislatures of two-thirds of the states. Importantly, this initial step is not a vote on actually adopting the amendment; it's simply a vote on whether or not to consider the amendment process.

Once a proposed amendment clears this hurdle, it then has to be ratified by three-fourths of the states. The specifics of the ratification process are very complicated; they depend largely on the specifics of the situation. Generally speaking, though, states ratify proposed amendments either by electing delegates to a state convention and having them vote on the amendment, or simply by having the state's legislature vote directly on the amendment.

The upshot is that unless three-fourths of states agree to abolish the Electoral College, it's here to stay. Technically, that is.

Proponents of ending the Electoral College know how big of a lift the constitutional amendment process is. So, they've devised a workaround that would render the Electoral College irrelevant while technically leaving it in place. It's called the National Popular Vote Interstate Compact (NPVIC).

Under the current system, every state is allotted a number of electoral votes based on its population, and whichever presidential ticket wins the state's popular vote gets all of that state's electoral votes. (There are two exceptions to this: Maine and Nebraska divide their electoral votes by congressional district, meaning that they sometimes "split" their votes between different candidates.) The idea behind the NPVIC, however, is for individual states to pass laws that award their respective electoral votes to whoever wins the national popular vote, not the state popular vote.

If a collection of states (it doesn't matter which ones) with a total of 270 or more electoral votes — the minimum needed to win a presidential election — were to pass laws like this, the Electoral College would become irrelevant: Whoever won the popular vote would automatically be awarded at least 270 electoral votes and, thus, the presidency.

As of this writing, 12 states plus Washington D.C. have enacted NPVIC laws; collectively, these jurisdictions have 181 electoral votes. In two additional states, Delaware and New Mexico, a NPVIC law has passed but not yet been signed by the governor. And in eight other states, the NPVIC has been approved by one, but not both, chambers of legislatures. This means that, assuming the governors of Delaware and New Mexico sign the NPVIC, the Electoral College could effectively be abolished if a group of states with at least 81 electoral votes between them enact the NPVIC.

The vast majority of states that have passed the NPVIC are blue, Democratic-voting states. That's a reflection of the fact that the Electoral College benefits Republicans politically — and that, in turn, is probably why Warren isn't the only Democratic presidential candidate to call for an end to the archaic system.

Regardless of how it happens, getting rid of the Electoral College would be a steep climb. But some have argued that it would also make America a fundamentally more democratic country.