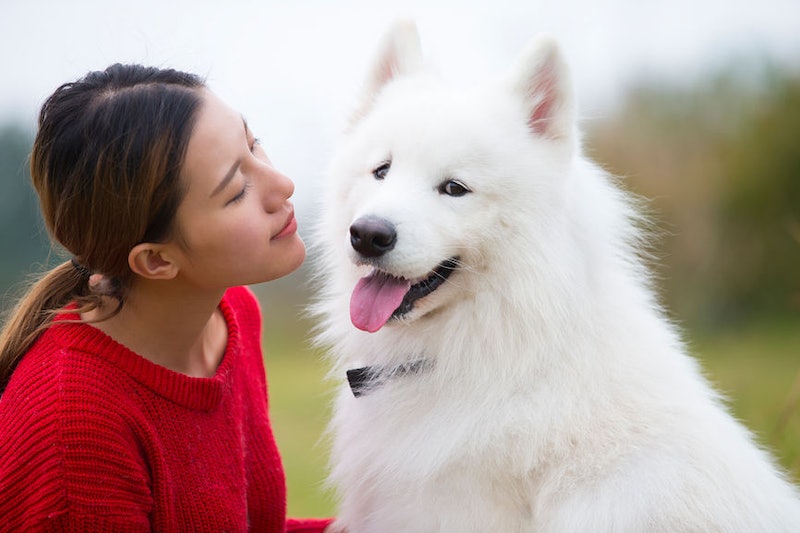 Most dog owners will be familiar with the constant battle to prevent their pets from eating anything and everything they stick their nose into. But after a new warning from veterinary charity PDSA about the dangers lurking in compost bins, you might want to be a little extra vigilant about your dog's unauthorised snacking. Rotting food waste, the charity says, has the potential to fatally poison your dog — and almost did, in a recent case concerning two rescue dogs from Cheshire. So can dogs eat compost? No, they absolutely can't, and it's worth taking extra measures to ensure they can't access it.

As Metro reports, the warning comes after rescue dogs Cleo and Cobi wormed their way into a locked compost bin containing rotting potatoes, kept in their owner's shed in Crewe, Cheshire. Ash Beresford, 24, returned home to find his pets seriously ill. "I came home to find Cobi shaking with her eyes glazed over, and Cleo was unconscious," he said. "I knew immediately that something was very wrong, and then I spotted the empty compost caddy."

Beresford rushed his dogs to the nearest animal hospital, where their sickness was diagnosed: mycotoxicosis, the result of eating mouldy food. Andrew Hunt, a senior PDSA vet, told Metro, "As foods rot, the mould that occurs can produce compounds called mycotoxins. These are naturally occurring substances and while some types can be beneficial, such as penicillin, others can be highly toxic to both humans and animals."

"There’s no antidote — treatment involves supporting the dogs to try and reduce their risk of seizures and other effects of poisoning while their bodies work through the toxins," he added. In the case of Cleo and Cobi, Hunt said, "the vets were doing everything they could, but we just had to wait and see how they would respond."

Fortunately for the pups, both ultimately received the all-clear, after hours of treatment involving intravenous infusions and medication to combat seizures. "At one point I was advised to say my goodbyes as it wasn’t certain that they would pull through," said owner Beresford. "When I got the call early the next morning to say they were out of danger, I can’t even begin to describe the relief I felt."

So how can you prevent the most determined of dogs from clawing their way into the compost? Simply locking your compost bin might not be enough: it didn't stop Cleo and Cobi from getting in, after all. Website The Dog People offers some tips, including weighing down the lids of compost bins with heavy bricks or similar materials. Avoid putting foodstuffs that dogs can sniff out in the compost bin, like fish, meat, dairy products, bones, oil, or grease, and don't use accelerators like blood meal for the same reason.

If your dog's a digger, be sure to use a bin with a secure floor so your pup can't burrow their way in. Plus, keep a close eye on your dog whenever they're outside or anywhere near composting food. And when you're lamenting the vast efforts required just to keep your merrily self-destructive dog alive? Take a quick glance at their perfect adorable face, and remind yourself why it's entirely worth it.