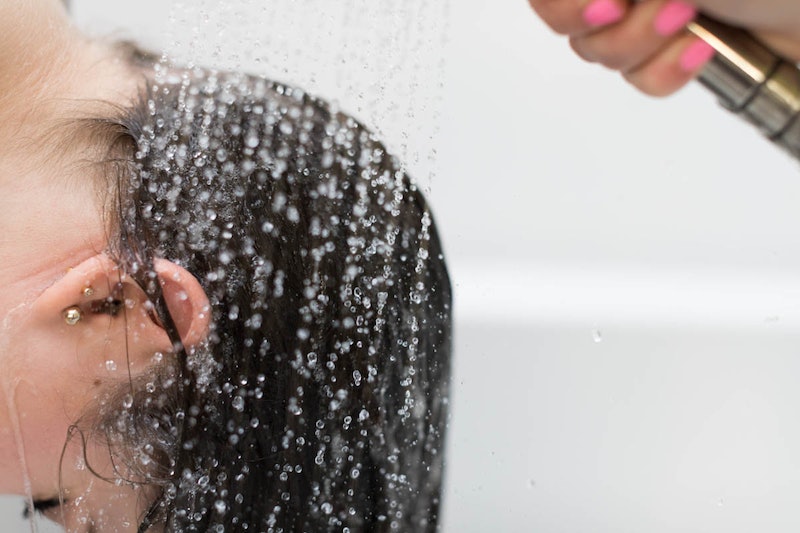 Maybe you’ve always believed your parents and grandparents know best, but it may be time to second guess some of the tidbits of wisdom they’ve passed down about physical health. One of the most common beliefs — or, more accurately, old wives’ tales — that’s has been passed down from generation to generation is that going outside with wet hair can make you sick. No one really knows how this would work, since wetness doesn't inherently make you more attractive to germs. But, if you're the kind of person who doesn't like to blow dry your hair before going out, and you (like most people) are more prone to getting sick during the winter, I can see how the association could be made.

The truth is, however, a lot more complicated than that. Wet hair has a bad reputation of causing health issues, but most researchers agree that being cold — whether due to wet hair, or a lack of a jacket — doesn’t actually contribute to contracting the common cold.

"You cannot catch a cold or the flu simply from going out with wet hair during winter," Anita Skariah, DO, a physician who specializes in internal medicine and pediatrics at UNC Healthcare, tells Bustle. "Some wives’ tales are valid conclusions from observations people have made through the years, but this one has not been proven conclusively, so far — despite a few studies investigating this."

While wet hair in freezing temperatures or snow will definitely cause discomfort, you’re more like to get sick because of your environment. "What puts you at risk is exposure to germs," Skariah says, explaining that, "Touching surfaces that may have virus-causing germs, and then touching your mouth, or nose transfers the germs into your system."

Further, the common cold and flu viruses are transmitted through bodily fluids of people already infected. When someone who is sick sneezes, coughs, or blows their nose, they actually release respiratory droplets into the air that spread the sickness. (Gross, but true.)

Though the idea your wet hair is making you sick is not true, this could be why the myth has persisted: As Health reported, wet hair cannot increase your chances of catching a cold, “unless you are so cold that you get hypothermia, which could make you susceptible to infection.” Also, since common colds and the flu tend to occur during winter or rainy seasons, people have made the assumption that cold weather equates to sickness. However, winter actually means you tend to spend time indoors, in close proximity with a whole bunch of people and their germs.

Most of the lessons many of us were taught as children about physical health and wellness are not completely accurate, or accurate at all. In addition to the wet hair myth, chicken noodle soup may be comforting, but it definitely won’t cure a cold. “The five-second rule” has also been determined by many studies to be a myth — meaning, the minute you drop your food on a germy surface, it is contaminated. Even the idea that you can cut out moldy spot in bread, and still safely eat it, is untrue. "With soft food, it's very easy for the roots [of the mold], or the tentacles, or whatever creepy word you want to use, to penetrate" deeper into the food,” Marianne Gravely, an information specialist for the United States Department of Agriculture, told NPR in 2017. So, you may want to double check the advice you were taught as a kid is substantiated by science.

If you are experiencing constant colds and sickness, it’s not because you’re showering before you head out the door. And while wet hair is definitely not to blame, your cold could be caused by you ignoring some of the other classic hygiene tips your parents taught you. Since viruses are transmitted through bodily fluids, sneezing and coughing into your elbow actually does significantly reduce the spread of the common cold or viral illnesses. Additionally, the CDC suggests washing your hands for at least 20 seconds with soap — yes, they literally suggest singing “Happy Birthday” twice — and washing them often. This becomes especially important in the midst of flu season (aka, mostly winter).

All-in-all, Skariah says, "Cool and dry conditions enhance Influenza A survival in temperate climates. So, grandma was correct that being out and about during winter can lead to catching a virus — just not from wet hair."

Even if you prefer to blowdry your mane before you go out, don’t fall for the myth that it can protect you from getting sick. Your wet hair will not make you sick, but your hygienic habits definitely can.

More like this
13 Summer Solstice Quotes To Celebrate The Longest Day Of The Year
By Sadie Trombetta
The Guide To “Witches Stairs” & Why They’re Actually Great For Small Spaces
By Emma Garza
The UK Abortion Laws In 2022, Explained
By Sophie McEvoy
6 Abortion Advocates To Follow On TikTok
By Sara Youngblood Gregory
Get Even More From Bustle — Sign Up For The Newsletter

This article was originally published on Dec. 14, 2017