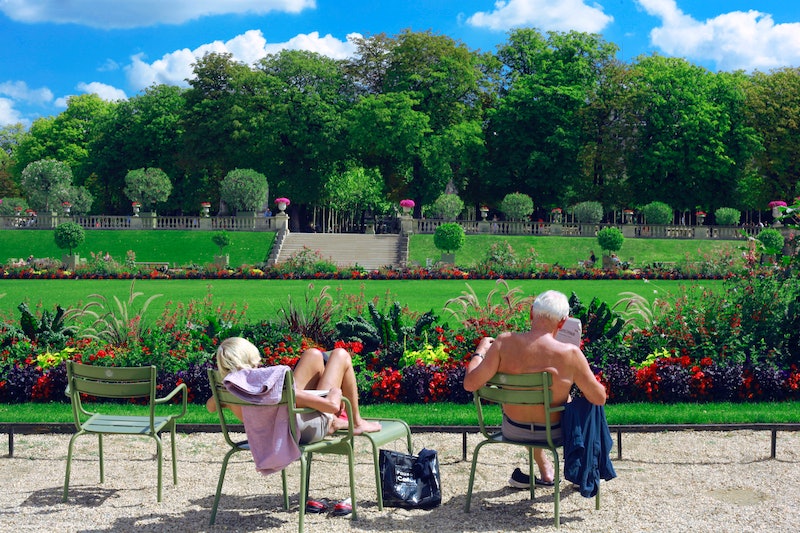 There's a lot of evidence that gardens, lawns and natural places — "green spaces," as they're called — are psychologically and physically healthy for humans. They offer stress reduction and other apparent health benefits, but there's significant discussion about why. Are humans just wired to feel and do better when they're around lots of flowers and leaves? Do they impact the way in which we think and behave in ways that give us better health? Is it some combination of both? Is being exposed to chlorophyll somehow inherently charming to us for incredibly obscure reasons?

It's National Garden Month, so it seems like a good time to explore these sorts of questions — as a motivation to get yourself near some green space if you can, whether it's your own private environment or just routing your commute through a park. If your office is cooperative enough, green indoor walls and spaces are now becoming a "thing". (The color green on its own is good for you, according to the American Psychiatric Association, but it's worth getting some living greenery in to maximize the effects.)

So what drives the feel-good factor of greenery in our lives, and why should it drive you to set up a little piece of Eden in your own backyard?

More like this
This Psychological Effect Might Be Keeping You From Hitting Your Goals
By Lexi Inks
19 Latinx Therapists & Mental Health Experts To Follow On Instagram
By Kaitlyn Wylde, Naydeline Mejia and Lexi Inks
This Tarot Card Means It's Time To Reach Your Magical Potential
By Brittany Beringer
10 Ways To Be More Empathetic To Your Partner
By Raven Ishak and Lexi Inks
Get Even More From Bustle — Sign Up For The Newsletter