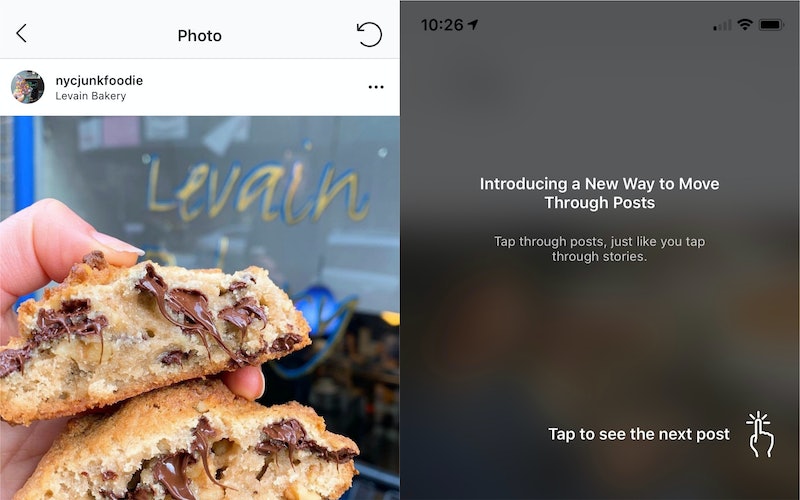 It's the holidays, aka prime time to be on Instagram, whether it's to post your annual "look at me and my dog in front of the tree!" photo or just to scroll into a glorious abyss of everyone's holiday dinner shots. This year, though, there's been a bit of a plot twist — people are noticing that a new "tapping" feature has rolled out on Instagram, prompting many users to wonder: "Can I get scrolling back on Instagram?"

UPDATE: Instagram has responded to Bustle's request for comment with this statement: "Due to a bug, some users saw a change to the way their feed appears today. We quickly fixed the issue and feed is back to normal. We apologize for any confusion." An Instagram spokesperson confirmed that restarting the app should return the timeline back to scrolling.

EARLIER: Bustle has reached out to Instagram for comment on the new feature, and will update this post upon response. In the meantime, though, a little background on the new sitch: likely, if you're reading this, you too opened your Instagram app to a message that read "Introducing A New Way To Move Through Posts," prompting you to tap through posts the way you would through Instagram Stories instead of scrolling the way you normally would. That feature may be new to you, but it's been in the works for the past few months; Instagram confirmed to TechCruch in October that the app was working on rolling out a "Tapping" feature. Back then it seemed to focus on using it for the "Explore" page, but now users are experiencing it throughout the app. An Instagram spokesperson told TechCrunch in October, “We’re always testing ways to improve the experience on Instagram and bring you closer to the people and things you love.”

Many users who are noticing the abrupt switch are a little jarred, and expressing their thoughts about it on Twitter;

While Instagram has not yet responded to Bustle's request for comment on how to switch back to ordinary scrolling, in the past, when Instagram has issued a rollout this massively, it has not been the kind that can be undone; more than likely, the "Tapping" feature that the app was testing a few months ago is here to stay.

That isn't to say, though, that you're completely out of options. First of all, if you're dissatisfied with the change, you can always contact Instagram to let them know. And second of all — although it is not nearly as convenient as doing it on mobile — the desktop version of Instagram doesn't appear to have changed, so you can still scroll into that abyss and sort of, kind of get your fix.

But before you totally denounce the new update, consider the time and consideration that went into testing it — Instagram wouldn't make a major shift like this for no reason. Per Josh Constine at TechCrunch, "Tap to advance, pioneered by Snapchat, eliminates the need for big thumbstrokes on your touch screen that can get tiring after awhile." Constine also mentions the ability to see the full content of a post at once, rather than have to scroll to get it in view. So ultimately, this update might be more convenient and less tiring for us all; the adjustment period, however, is clearly going to take a hot second to sink in.