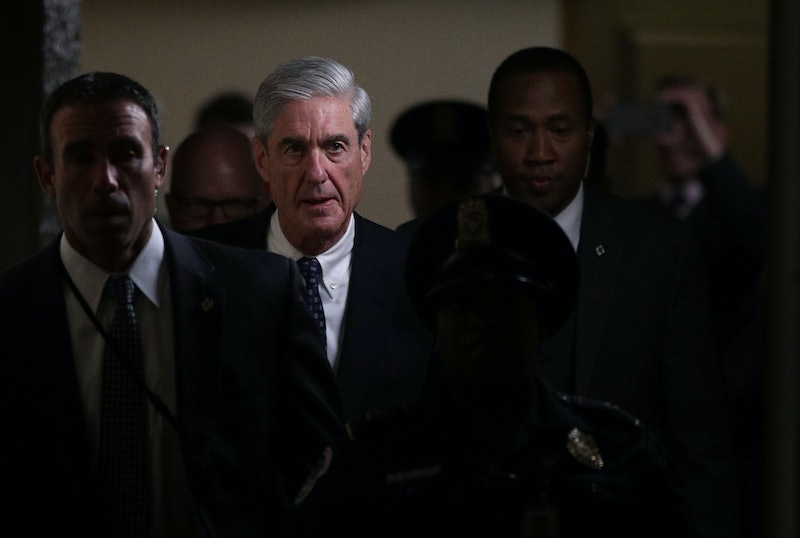 It's been nearly two years since Special Counsel Robert Mueller was appointed. After a number of high-profile arrests, pleas, and at least one conviction, the former FBI director is expected to submit his report soon. But for an ordinary citizen like yourself, the big question on your mind is likely: Can I even read the Mueller report?

If you've been following every twist and turn of the slow-going investigation, you might have to wait a little while longer because the decision to make Mueller's report public lies with the Justice Department, according to The New York Times.

Here's how the submission process has to go, as reported by the Times' DOJ correspondent Katie Benner: First, the special counsel must submit a report to the attorney general, now the recently confirmed Bill Barr. Then, Barr, as attorney general, is obligated to "send a summary of that work to Congress," according to the Times.

But Barr has "considerable flexibility" and "discretion" into what Congress and the American public is told, according to the Times. Meaning, as the Washington Post explained on Friday, Barr can decide just how much — or how little — of the Mueller report is released to the general public.

There are also other potential impediments to publicly releasing the report. Those could be the use of classified information in the report, as well as rules for the maintaining secrecy of testimony in front of a federal grand jury, according to Vox.

Democratic lawmakers are already calling for the full release of the Mueller report whenever it comes though. California Sen. Dianne Feinstein, for instance, called for the full report to be made available to Congress. In a statement, CNN reported she said,

A summary written by Attorney General Barr in place of the Mueller report will not be acceptable. This isn't limited to a question of whether crimes have been committed. Congress must also determine if there was misconduct or abuse of power.

On Friday, six Democratic congresspersons (who also chair important committees) sent a letter to Barr's office demanding transparency for the public. (You can read the full letter here.) "After nearly two years of investigation — accompanied by two years of direct attacks on the integrity of the investigation by the President — the public is entitled to know what the Special Counsel has found," said the letter from Rep. Jerrold Nadler, Adam Schiff, Elijah Cummings, Eliot Engel, Maxine Waters, and Richard Neal, according to CNN.

The lawmakers said they understood the policy to not name people who haven't been charged with misconduct, but wanted to stress the importance of withholding information from the public. While speaking to reporters from the Oval Office on Wednesday, President Donald Trump said the report is Barr's responsibility. "That'll be totally up to the new attorney general," Trump told reporters when asked to comment on the timing of the report's release, according to NBC News.

Trump has also maintained that his 2016 presidential campaign did not collude with Russia, telling the Associated Press that he won the presidency "because I was a better candidate ... and it had nothing to do with Russia." The president also told the wire service that "if it's an honest report," it will include that as a reason for his victory. He's consistently characterized the investigation as a "witch hunt."

Despite the calls for transparency, it's still unclear when the actual report will be submitted. On Wednesday CNN reported that Barr was planning to announce the special counsel's report as early as the coming week, but on Friday, an unnamed DOJ official told multiple news outlets — including CNN — that the report will not be delivered next week.