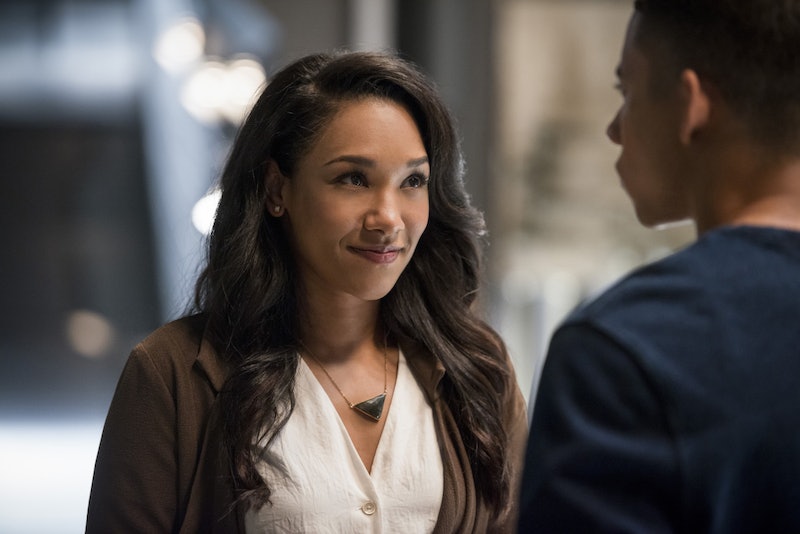 One of The Flash's greatest strengths is the way it combines lighthearted superhero fun with emotional moments. Intense battles are often preceded by goofy training scenes, while moments of young adult awkwardness are intercut with a scary prophecy. That's why it's so easy to fall in love with the show's characters — they're still relatable, despite the superhero setting. However, the consequence is connecting with them so much is worrying about them, as fans are now desperately hoping that Iris won't die on The Flash. In the midseason finale, Barry traveled a few months into the future and saw Iris murdered by Savitar and now, he's doing everything he can to try stop that from ever happening.

As countless comics, films, and TV shows have proven, being in a relationship with a superhero is an extremely dangerous position. If a villain wants to hurt or weaken their superhero enemy, going after their significant other is a tragically effective way to do it. Still, Iris has managed to stay alive for three seasons of The Flash, and I think there may be hope for Iris even if she is "killed" by Savitar.

The first clue that she'd ultimately be OK comes from DC Comics. Though The Flash changes a lot from its source material, many major plot points have been adapted from them. At one point, the comic book version of Iris does die, but she is soon brought back to life.

It's all a result of time travel, which is already a big part of The Flash. In the comics, Iris' parents are able to bring her life force from the past to their present, where she is resurrected in a new body. I hope this isn't the route The Flash chooses to take, as it would mean losing Candice Patton, but the show could do something similar without the body-switching twist.

Fans have also been speculating about what could happen to Iris, and Pagey on YouTube in particular listed some notable theories. Though the video admits Iris could end up dying for good or someone else could take her place, in a world with doppelgangers, time travel, and supernatural occurrences, there are multiple avenues to bringing Iris back.

They range from something as simple as being healed by a meta with such powers, or as complicated as a doppelganger Iris from a different world taking her place. If the latter were to happen, the Iris we know and love would remain dead, with Barry and the team forced to deal with the emotionally complicated situation of working with an Iris lookalike. Luckily, thanks to time travel, the changing of events is always a possibility. A key theme of this season has been the debate over whether or not to alter past events.

Whatever happens, I don't want to say goodbye to Iris — the real Iris. She brings so much strength and warmth to the superhero team. However, it would be interesting to watch Barry try to change events and fail, because the changing of events is where we began this season. Barry ran back in time to stop his parents death and messed everything up. Seeing him at the end of the season be faced with a similar choice, may prove to be an interesting dilemma.

I think the best way to combine that failure without removing Iris from the show would be for her to return from the dead after that scene with Savitar comes to fruition. Hopefully, The Flash will find a way to give Iris the respect she deserves as a key character while continuing Barry's interesting emotional arc.