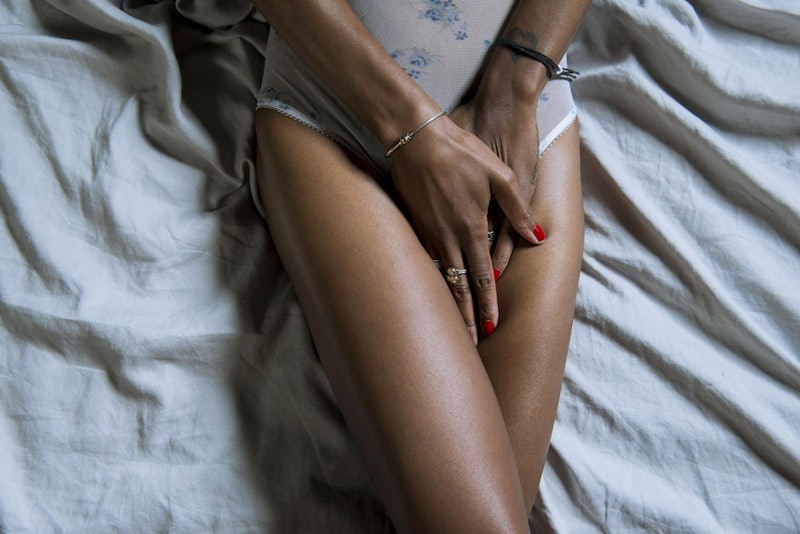 When I made an appointment with my OB/GYN to get an intrauterine device — more commonly referred to as an IUD — I was so excited: it seemed like a great long-term birth control option for me, and it came with the added bonus of no longer having to set an alarm to help me remember to take my pill each day. But despite all the ways I imagined that an IUD would improve my life and sexual health, there was one pretty major concern that I wanted to address: can an IUD fall out? Although I wasn't going to not get an IUD just because it *might* fall out one day, I still wanted to be aware of the potential risks of getting an IUD before I made my decision. And as it turns out, my worries weren't totally unfounded.

"IUDs can fall out," Caitlin Hoff, Health & Safety Investigator at ConsumerSafety.org, tells Bustle. "It is a rare occurrence, but it does happen. Most often, it is expelled during a woman’s period, and it generally occurs during the first three months of use. If you are worried, check if you can feel the strings; if you can’t feel them, make an appointment with your doctor and avoid unprotected sex."

So yes, it is possible for an IUD to fall out — but as long as you're vigilant and periodically check to make sure it's still up there, you should have nothing to worry about. For what it's worth, it's been two years since I got my Mirena IUD, and mine is still firmly in place. But hey, just in case you're still concerned, here's everything you need to know about potential IUD complications.

What Are The Risk Factors For IUD Expulsion?

Though it's hard to know exactly what might cause an IUD to fall out in one person but not in another, there are certain risk factors for IUD expulsion that you should be aware of.

"A smaller uterus may be a risk factor for expulsion," Hoff says. "Studies are still looking into risk factors and explanations for an IUD expulsion, but many believe that a small uterus leaves you vulnerable to an IUD falling out. This demographic would include women under 20 or women who have never been pregnant."

How do you know if you have a "small" uterus? It might sound silly and awkward, but you should simply ask your OB/GYN: they're familiar with your body, and also have plenty of experience with other uteri, so they'll be able to tell you where your uterus falls on the size spectrum (and remember there's no "wrong" size to be).

Aside from your uterus size, there's one other thing you should be aware of, because it might be a risk factor for IUD expulsion: how heavy your period flow is. "Because IUDs tend to fall out during a woman’s period, women with heavier menstrual cycles are also at risk for expulsion," Hoff says.

Here's How To Tell If Your IUD Is Out Of Place

Unfortunately, an IUD actually falling all the way out of your vagina isn't the only scary possibility: IUDs can move or get misplaced within the body.

"Even without falling out, your IUD might be out of place," Hoff says. "An IUD can come out partially without falling out completely. If this happens, it will need to be removed; it will not prevent pregnancy in this misplaced state. Another possibility is a perforation. Perforation occurs when the IUD pushes through the uterus. When this happens, it will need to be surgically removed."

Ouch — it might be a painful mental image, but it's also a real possibility for anyone with an IUD. So if you're worried your IUD is out of place, what should you do?

"If you believe your IUD has moved or been expelled, see your doctor," Hoff says. "Again, even a misplaced IUD will do you no good in preventing pregnancies. See your doctor and do not have sex without utilizing another form of contraception."

Other Signs Of IUD Complications

Once you get an IUD, if all goes well, it will do its job without incident and you'll never have to think twice about your birth control. But even if you're optimistic that there will be no issues, it's always better to be aware of potential warning signs that there's a problem with your IUD — here's what to be on the lookout for.

"Some physical signs that signal an IUD complication include excessive pain in the vaginal or abdominal regions, excessive bleeding, unusual vaginal discharge, fevers, chills, or trouble breathing," Hoff says. "If you experience these symptoms and can no longer feel the strings of your IUD or you feel the IUD itself coming out, call your doctor immediately."

In the event that something with your IUD ever feels off or uncomfortable, always listen to your body and trust your instincts, and consult your doctor right away if you experience worrying symptoms. Ultimately, an IUD isn't the right choice for everyone, and you should talk to your health care provider to figure out what birth control method is best for you. If you do decide to get an IUD, enjoy your blissful, worry-free years of practically invisible birth control — but still be aware of its presence, just in case it ever falls out.