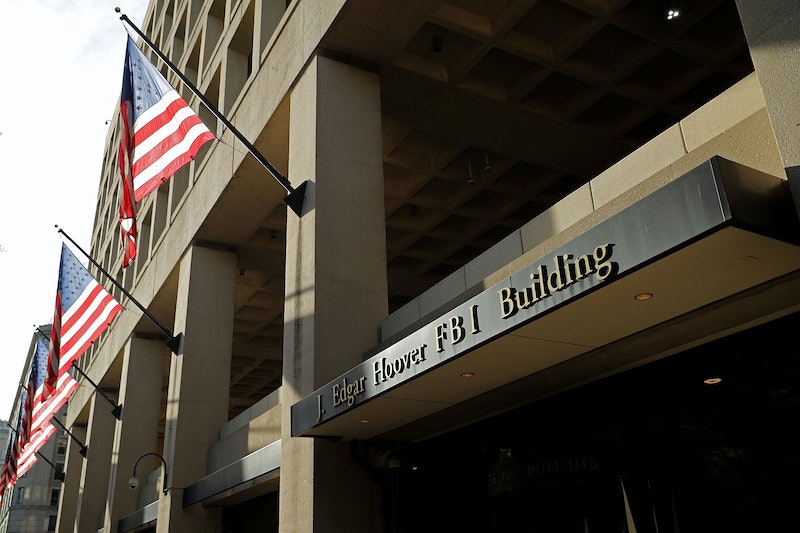 There was another shocking development in the crisis surrounding James Comey's firing, and it makes everything President Trump has done thus far even more shocking. The New York Times reported that Trump asked Comey to stop the Russia investigation, according to a memo Comey wrote at the time. Trump allegedly asked Comey to let "Flynn go" too. “He is a good guy. I hope you can let this go,” The Times quoted. It's shocking to say the least, and now Democrats are arguing that Trump's alleged request could be an obstruction of justice, which could get Trump impeached.

First, it's important to note that the White House is denying that any such thing happened, calling the description of the conversation neither "truthful or accurate." In a statement, the administration said, "While the President has repeatedly expressed his view that General Flynn is a decent man who served and protected our country, the President has never asked Mr. Comey or anyone else to end any investigation, including any investigation involving General Flynn."

Now, back to the issue at hand. To get to the answer, you need to consider two things. First, what is an obstruction of justice? And second, does this count? According to a tweet from Sen. Chris Murphy of Connecticut, members of Congress are wondering the same thing. "Just leaving Senate floor. Lots of chatter from Ds and Rs about the exact definition of 'obstruction of justice,'" he wrote.

Well, according to The New York Times, there are a number of federal statutes that have to do with the idea of "obstructing justice." There are some broad phrases in the statutes that describe it as an act that "obstructs, influences or impedes any official proceeding." If Trump indeed asked Comey to end the investigation into Flynn and Russia, that could be considered an obstruction. But then the other issue is impeachment. According to the Constitution, there are some requirements. "The President, Vice President, and all civil Officers of the United States shall be removed from Office on Impeachment for, and conviction of, Treason, Bribery, or other High Crimes and Misdemeanors," it reads. So does obstruction of justice count as a high crime or misdemeanor? Essentially that depends on Congress.

If enough representatives agree, then the impeachment can be brought forward. They essentially decide what qualifies. But for this potential obstruction of justice to become impeachable, it would require Republicans to see things the same way that the Democrats do. Currently 25 GOP reps would need to vote with Democrats in the House, and that's a stretch. For removal, two-thirds of senators would also need to vote him out.

As of right now, it seems like the Republicans are prioritizing their policy goals over keeping Trump in line. So don't hold your breath for impeachment, even if the allegations against Trump clearly point to a potential obstruction of justice.