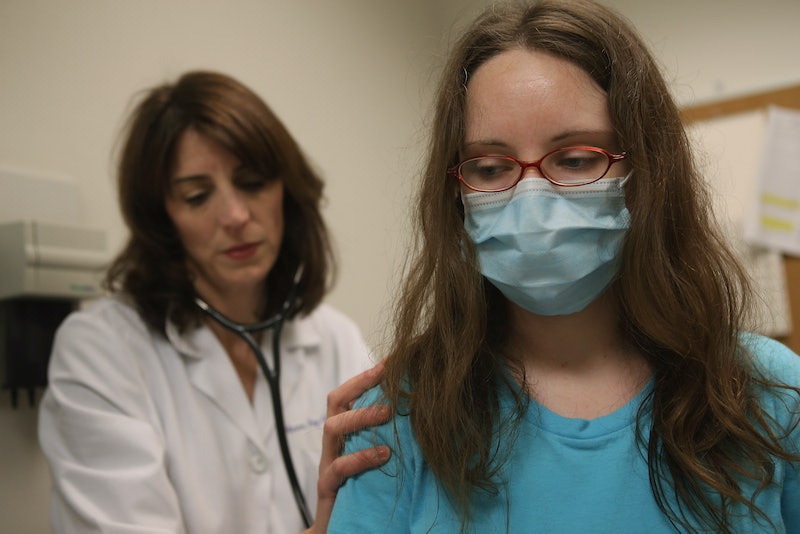 As someone who has health anxiety, I can be pretty on edge during flu season. Every dry throat in the morning or achy neck at the end of the day makes me wonder if I'm coming down with H3N2 — which, compared to many of the other illnesses my anxiety fixates on, is actually a likely possibility, considering the flu shot was only estimated to be about 30 percent effective in 2018. But being my health-anxious self, I can't help but wonder if I were to get sick, whether or not getting the flu can affect anxiety itself.

Dr. Alan Taege, an infectious disease doctor at the Cleveland Clinic, tells Bustle that "there's always the anxiety of any significant infection going around the country." It's well-known that when folks start to get sick in large numbers, people tend to panic about whether they'll get sick. That situation-induced panic, though, doesn't extend to panic caused by the actual, physical flu. Taege says if you get the flu, the virus itself cannot directly affect your anxiety.

However, anyone with a mental illness will know that not feeling well physically can be a serious drain on your mental health, so that means the stress from suffering the symptoms of the flu could exacerbate your anxiety, and vice-versa. Fellow Bustler Kyli Rodriguez-Cayro pointed out that Psych Central "reported studies have suggested that mental illnesses can suppress the immune system, due to an increase in released stress hormones like cortisol. Dealing with the flu and mental health issues can become a vicious cycle, especially if [you're] treating one illness without treating the other."

While the flu germ can't affect your anxiety directly, there is an extremely rare potential side effect of the flu that could have a devastating effect on your mental health: Encephalitis, or an inflammation of the brain. It is really, really rare — Taege stresses that encephalitis can be a side effect of the flu in less than 1 percent of flu cases. But the Encephalitis Society notes that, once someone receives treatment for encephalitis, it's entirely possible that the fallout of the inflammation can affect your anxiety.

"[Anxiety] may reflect the direct effects of encephalitis on the emotional regulatory centres [sic] of the brain, such that the sense of threat is amplified or there is difficulty taking on feedback to dampen down an increased sense of anxiety," the Encephalitis Society reports on its website. "Anxiety can also be a response to the changes to an individual’s world after encephalitis as a person tried to make sense of cognitive, emotional and behavioural [sic] changes and the limitations to everyday life imposed by these changes."

Again, encephalitis is extremely rare. If you get the flu, you're most likely to experience the usual physical symptoms: a potential fever, a cough, a sore throat, a runny or stuffy nose, muscle or body aches, headaches, and fatigue, according to the Centers for Disease Control (CDC). If you're concerned that being sick will have a negative influence on your mental health, you should reach out to a mental healthcare professional.

Along with speaking to a professional, practicing small acts of self-care while you're sick will be worth the effort. It can feel virtually impossible to want to do anything, especially with something like the H3N2 strain dragging on your system, but remember your mental health needs maintenance even — and especially — when you're not feeling your best.

And if you're not sick, but are suffering from anxiety about the possibility of getting the flu, you should follow the usual prevention protocols: Get your flu shot, make sure you're washing your hands, and avoid touching your face.

That said, for many of us, simply going through the motions isn't enough to alleviate health-related anxiety, even when we're in good health. Dr. Sanam Hafeez, a New York City-based neuropsychologist, tells Bustle that a number of factors may be at play for this kind of anxiety, including the loss of a loved one, growing up with "overly worrisome parents or family members who were overly concerned with your health," experiencing an intense illness and "never effectively dealing with the anxiety from the experience," or fueling anxious tendencies with Google searches.

"It is important for people to note that these anxieties can be assessed and improved upon," Dr. Hafeez tells Bustle. "Constantly [G]oogling your symptoms will not make your perceived symptoms or your anxiety recede. Understand that the human body uses a lot of the same symptoms to signal many different illnesses, discomforts, or conditions. These don’t all have to be terminal, these don’t all have to be severe or chronic. The best way to assess your symptoms is with your doctor. Once you are cleared and in good physical health, dealing with your anxieties can be helpful in living a life with less stress and more enjoyment."