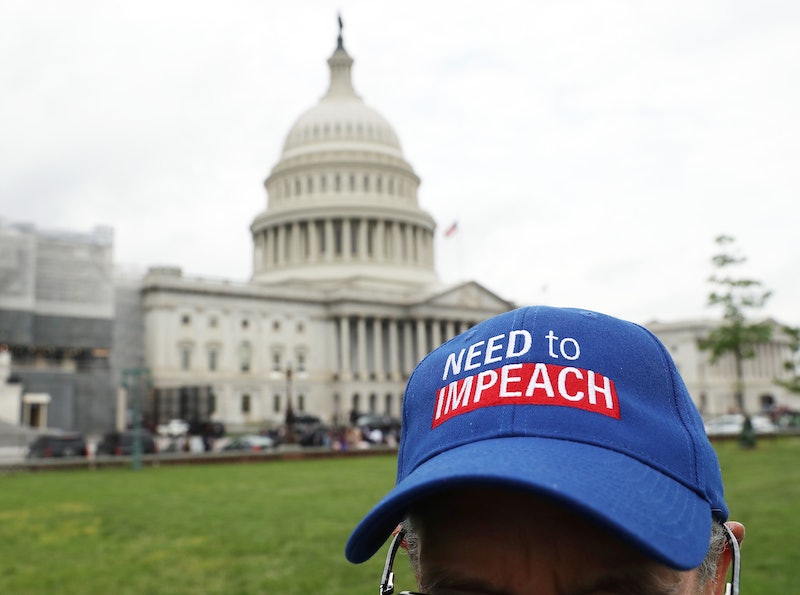 More and more lawmakers have been calling for President Trump's impeachment — and they're not all Democrats. Recently, one House Republican even joined in when he tweeted, "President Trump has engaged in impeachable conduct." Speaker of the House Nancy Pelosi has thus far resisted these calls, but there aren't many ways the president can fight impeachment if the House decides to initiate the procedure.

From a strictly procedural standpoint, Trump wouldn't have many options if it came to that. Impeachment is a process that plays out solely in Congress, and although the president can certainly push back against an impeachment attempt in unofficial ways — by attempting to rally public opinion in his favor, for instance — presidents don't have any official mechanism by which to challenge or fight the process.

Although the term "impeachment" is often used colloquially to refer to the removal of a president from office, that's not quite accurate. Impeachment refers only to charges against the president, which must first be approved in the House of Representatives. If the House votes to impeach, the matter is referred to the Senate, which then votes on whether or not to actually remove the president from office. To use a legal comparison, impeachment in the House is roughly analogous to an indictment, whereas the Senate vote is similar to a jury's final verdict.

In an April tweet, Trump revealed that "if the partisan Dems ever tried to Impeach, I would first head to the U.S. Supreme Court." It's unclear what he meant, however, as the Supreme Court plays no role in impeachment proceedings. In fact, the high court ruled in 1993 that impeachment powers lie solely with Congress, not with the court.

But the authority to open impeachment proceedings against Trump lies solely with the Speaker of the House, and so far, Pelosi hasn't jumped on board the impeachment efforts. Although the mood among House Democrats could reach a tipping point — House Budget Chair John Yarmuth told CNN on Wednesday that "a growing majority of our caucus believes that impeachment is going to be inevitable" — it hasn't yet, and Congress won't move on impeachment until Pelosi says so.

Still, Pelosi's rhetoric around the issue has shifted slightly over the last several weeks. In an April letter to colleagues, Pelosi stressed that "the facts regarding holding the President accountable can be gained outside of impeachment hearings." But weeks later, Pelosi said at an event at Cornell University that the White House's refusal to comply subpoenas from House Democrats could constitute "part of an impeachable offense," adding that "every day, [Trump]'s obstructing justice." Trump has repeatedly denied any wrongdoing.

She reiterated those claims after a reportedly tense meeting with Trump on Wednesday, USA TODAY reports.

"This is why I think the president was so steamed off this morning," Pelosi said at a conference hosted by the Center for American Progress. "The fact is, in plain sight — in the public domain — this president is obstructing justice and he is engaged in a cover up and that could be an impeachable offense." Trump denied this later in the day, telling reporters from the Rose Garden that "I don't do cover ups."

Of course, if Congress does attempt to impeach Trump, he'll probably do everything in his power to remain in office. That will likely include using the bully pulpit to hammer Congressional Democrats while lobbying lawmakers behind the scenes to vote against impeachment. But he won't have have any formal tool with which to fight impeachment proceedings.