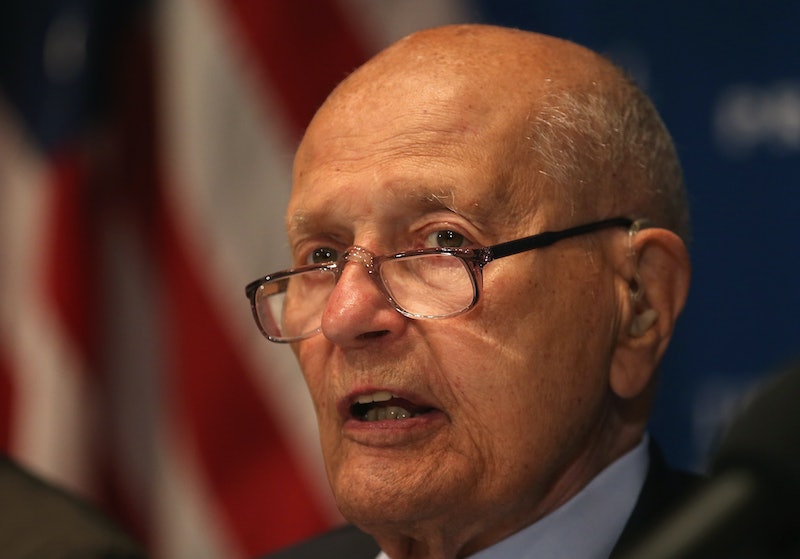 On Tuesday, former Congressman John Dingell suggested that the United States take a dramatic step to fix the problems that plague Congress: abolishing the U.S. Senate. In light of this proposition, you might be wondering whether the Senate can be abolished. Though the longest-serving congressman in history argues the body's dissolution is necessary for American prosperity, actually eliminating the Senate wouldn't necessarily be an easy feat.

As Vox reported, Dingell served in the U.S. House of Representatives from 1955 through 2015 — and his long tenure made him intimately familiar with the inner-workings of the legislative branch. On Tuesday, Dingell published an excerpt from his book, The Dean: The Best Seat in the House, in The Atlantic. In this excerpt, the former congressman asserted that he believes the U.S. Senate needs to be abolished because of its antiquated nature. Dingell emphasized that allowing all states equal representation in the Senate simply doesn't make sense anymore when some states' populations vastly outnumber others. As Dingell wrote:

The Great Compromise, as it was called when it was adopted by the Constitution’s Framers, required that all states, big and small, have two senators ... Today, in a nation of more than 325 million and 37 additional states, not only is that structure antiquated, it’s downright dangerous. California has almost 40 million people, while the 20 smallest states have a combined population totaling less than that. Yet because of an 18th-century political deal, those 20 states have 40 senators, while California has just two.

The former congressman then argued that he believes that the best way to prevent smaller states from monopolizing the country's legislative agenda is to simply eliminate the U.S. Senate. "... There is a solution ... that could gain immediate popular support: Abolish the Senate. At a minimum, combine the two chambers into one ... ," he said. "It will take a national movement, starting at the grassroots level, and will require massive organizing, strategic voting, and strong leadership ... But it has a nice ring to it, doesn’t it?"

While Dingell believes that abolishing the Senate would be beneficial for the American people, actually eliminating the body would be something quite difficult to achieve. As ThinkProgress explained, abolishing the Senate would require a constitutional amendment — something that is not easily attainable. Vox noted that Article V of the U.S. Constitution mandates that "no state, without its consent, shall be deprived of its equal suffrage in the Senate.” The outlet indicated that, technically, one singular amendment could be used to eliminate this Article 5 requirement and abolish the Senate, but getting support for the passage of such an amendment would be tricky.

Indeed, as the Washington Post explained, proposing a constitutional amendment requires the support of two-thirds of both houses of Congress or two-thirds of representatives at a constitutional convention. Then, actually ratifying an amendment requires the support of at least 38 states, either via their legislatures or at a ratifying convention. Thus, while technically possible, passing an amendment to eliminate the Senate seems quite unlikely, considering that many states and senators would probably not vote to diminish their own power and influence.

Vox did note, however, that the Senate could perhaps stand to lose influence in the future if both political parties question its legitimacy and decide to prioritize the power of the House instead. The outlet noted that changing perceptions and norms around the Senate seems to be the most likely way the body's influence could actually be diminished. Time will certainly tell if Dingell's recommendation to curtail the Senate's influence comes to fruition or if the body will continue to substantially impact Congress' decisions.