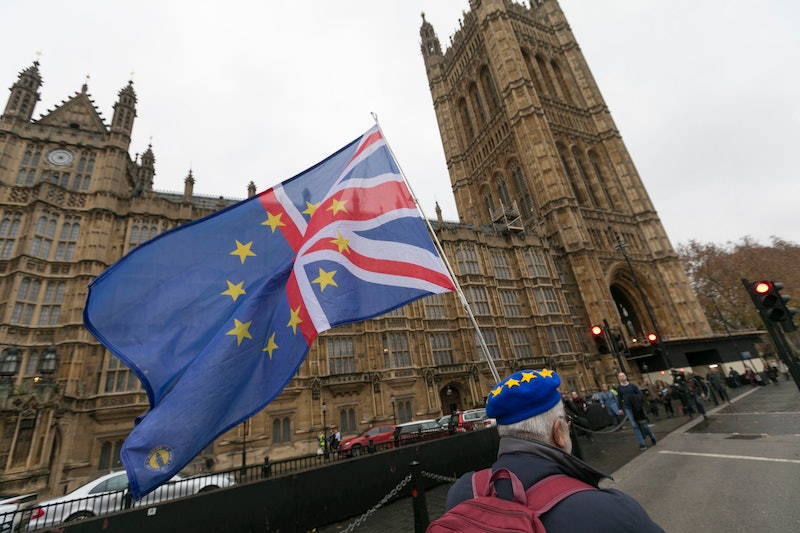 Just when you thought the Brexit process was getting a bit clearer, the EU has decided to put a spanner in the works. On Monday morning, the European Court of Justice ruled that the UK can cancel Brexit without having to seek approval from all of the other 27 members. It also ruled that the UK could revoke Article 50 — the law that kickstarted the two year withdrawal process — and remain as it is. That means the nation would be able to keep the pound, rather than having to adopt the euro, and would not have to become a part of the Schengen area (an area where there are no passport controls between each country).

This decision has been hailed as a super important one by those who wish to remain in the EU, but how likely is it that the UK will drop everything it has been working for for the past two years?

Well, the process isn't as simple as saying, "We're cancelling Brexit." The European Court of Justice stated that any such decision must "follow a democratic process," which means it would have to be approved by Parliament. And considering Theresa May has become an advocate for Brexit, it's unlikely that her government will want to push for this to happen.

This could of course affect the vote that will soon be taking place in the House of Commons. On Tuesday evening, MPs will be given the chance to accept or reject the prime minister's proposed deal. As the BBC reports, it's thought that many are preparing to reject it, leaving several options open.

Adam Fleming, the BBC's Brussels correspondent, believes that this new ruling may "sway a few MPs" but he also said that "a lot would have to change in British politics" for the UK to actually remain in the EU. This would mainly involve May and her government going back on everything they've said in the past couple of years.

There are some politicians who wish to revoke Brexit. These individuals are hoping that the European Court of Justice's ruling will pave the way for a second referendum. The People's Vote, as it's being called, could take several months to prepare for, as the BBC reports. If the UK decides to leave the EU on March 29 as planned, this probably wouldn't be possible. But now that an extension of the two-year withdrawal period is a real possibility, it makes the possibility of another vote that bit more likely.

However, members of the Conservative Party are firm in their view. Several have already spoken out to say that the government will not be changing its mind and that Brexit will be happening, one way or another.

"We don't want to stay in the EU. We voted very clearly, 17.4 million people sent a clear message that we want to leave the European Union, and that means also leaving the jurisdiction of the European Court of Justice," Environment Secretary Michael Gove told BBC Radio 4. "So this case is all very well, but it doesn't alter the referendum vote or the clear intention of the government to make sure that we leave on March 29."

Meanwhile, MP Jacob Rees-Mogg echoed this statement, telling LBC: "Will it change any votes tomorrow? I wouldn’t have thought so because the only way to stay in the European Union is to legislate to do so, to reverse the Withdrawal Act, and that would require the government to do a complete U-turn. I think this government would find it very difficult to remain the government if it went away from what it said in its manifesto and the referendum result."

Unfortunately, it seems like this news is just like any Brexit news with no clear answer and no definite plan of action. I suppose the people of the UK will just have to wait and see, as they have been doing since 2016.