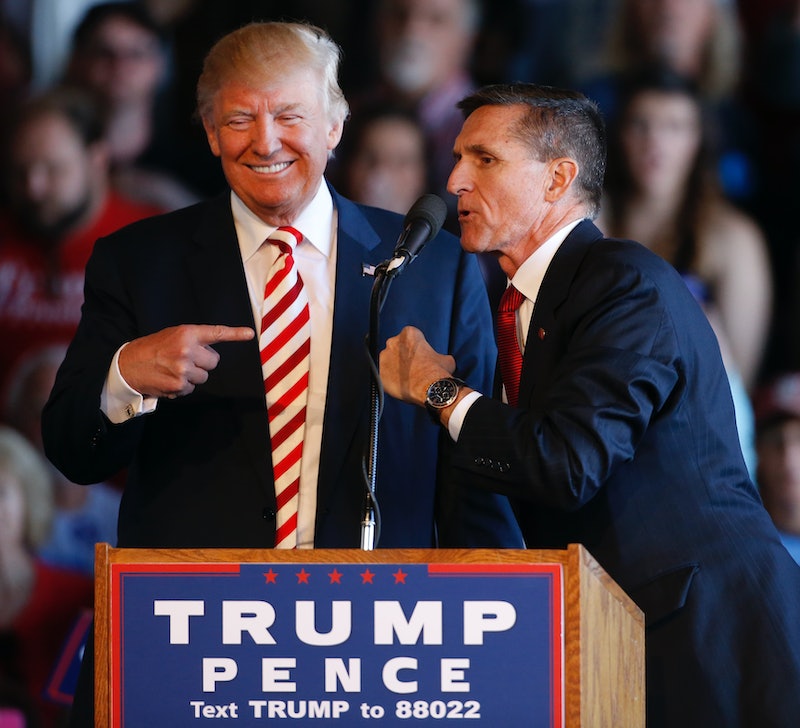 It didn't take long for the first member of Donald Trump's cabinet to resign. Michael Flynn was the national security adviser for less than a month before his pre-inauguration communications with the Russian ambassador finally came to light. But, obviously, his removal doesn't get the White House administration out of the woods just yet. There are still major questions of what Trump knew about the communications and when, leading many to ask if Trump could be impeached over the situation with Flynn.

The president's downfall could come if a federal investigation finds that Trump knew about, authorized, and/or directed Flynn's communications. Yes, even despite Trump's obscured financials and possible conflicts of interests, the revelation about Flynn could be what finally threatens the president's position in the White House. The only problem is there probably won't be any investigation at all. According to Chicago Tribune's Richard Lardner, House Speaker Paul Ryan declined to say whether or not an investigation would take place while Representative Jason Chaffetz of Utah has said "the situation has taken care of itself." To top it all off, Mitch McConnell told reporters on Feb. 14 that it's "highly unlikely" that Senate intelligence committees would take the time to investigate Flynn.

Still, there are a number of other senators and representatives that aren't letting the investigation go without a fight.

And whatever comes out of such an investigation about Trump's involvement—along with the revelations of Trump's other national security concerns—could mean impeachment and possibly indictment for the new president. It will take continued effort on behalf of congress and the American people to make sure those investigations go forth.

Even so, Trump's impeachment wouldn't necessarily solve everything. If members of his cabinet indeed colluded with Russian diplomats and intelligence agents, a lot of damage has already been done. Not to mention that next in the presidential line of succession is Mike Pence, followed by Paul Ryan, and Orrin Hatch—grim news for Democrats and liberals alike.

Either way, though Trump isn't even through his first 100 days in office, the possibility of his impeachment could become very real as more and more people press Congress' looking into Flynn's actions. With all that's happened so far in Trump's presidency, anything could happen at this point. But one thing that's been proven time and time again is this: Demonstrated public outrage can make a difference. So if everything that's happening around Flynn makes you angry, don't be shy about making that anger known.