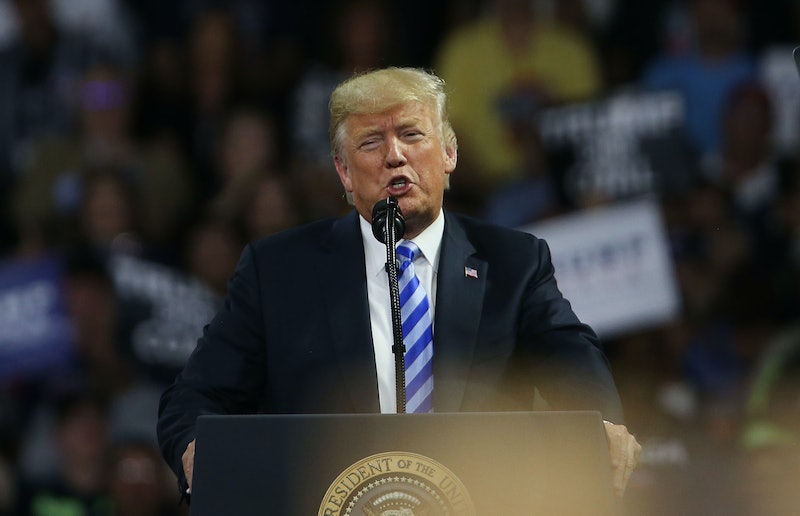 At a press conference Friday, President Trump said that he's considering invoking emergency powers to authorize the construction of a U.S.-Mexico border wall that Congress has so far failed to approve. The comment immediately raised the question: Can Trump really declare a national emergency to jumpstart construction on a border wall?

Trump made the remark while discussing the partial government shutdown, which was sparked by an impasse over border wall funding and is now entering its second week. ABC News later confirmed that the administration has been discussing the possibility of invoking emergency powers to fund construction of the wall, something that would otherwise be impossible without Congress' consent.

But is this even possible? The answer, unfortunately, isn't quite clear. There's certainly precedent for a president using emergency powers to take actions they otherwise wouldn't be allowed to take; the problem is that there's no single, legally-binding list of which actions a president is and isn't permitted to take in an emergency situation. Part of the problem is that a president's emergency powers are enumerated across many different laws, including not only the National Emergencies Act of 1976 but also countless other statutes that include the phrase "...except during a national emergency," or some other variant thereof.

Drawing on existing research, the Brennan Center in December identified no fewer than 136 actions that are permitted by a declaration of a national emergency or war. The list is fascinating and frightening; under various circumstances, a "national emergency" allows the president to exempt troops from drug testing, dispose infectious medical waste in the ocean and, shockingly, authorize the testing of biological weapons on human subjects.

Insofar as a border wall is concerned, the most relevant emergency power is probably the one enumerated in Title 10, subsection § 2808 (a) of the U.S. Code. It says that:

This is probably what Trump was referring to in mid-December, when he wrote in a tweet that "If the Democrats do not give us the votes to secure our Country, the Military will build the remaining sections of the Wall." Around that same time, a Department of Defense spokesperson told NPR that "Congress has provided options under Title 10 U.S. Code that could permit the Department of Defense to fund border barrier projects, such as in support of counter drug operations or national emergencies." And ABC News reported Friday that Title 10 is indeed the provision that the administration is considering invoking to begin construction on a border wall without Congressional approval.

That's not the end of the story, however. For one, invoking Title 10 would almost certainly provoke a legal challenge from Democrats, progressive organizations or both. Moreover, even if the administration won such a challenge, it's not clear that Title 10 would clear up enough money to fund the construction of a full border wall, a fact even some of Trump's allies acknowledge.

"Depending on what approach he takes, every option available to him comes with some structural constraints and will be met with congressional opposition and legal action — even the very rare emergency authority that has garnered debate this week," Tom Bossert, Trump's former deputy national security adviser, tells ABC News. "Unless Congress acts, there is seemingly a significant limit to the amount of wall Department of Defense could build."

One last point is worth stressing: Even if Trump were to declare a national emergency and order the military to start building the wall, this wouldn't end the government shutdown. The only way that will happen is if Congress passes, and the president signs, a government funding bill.