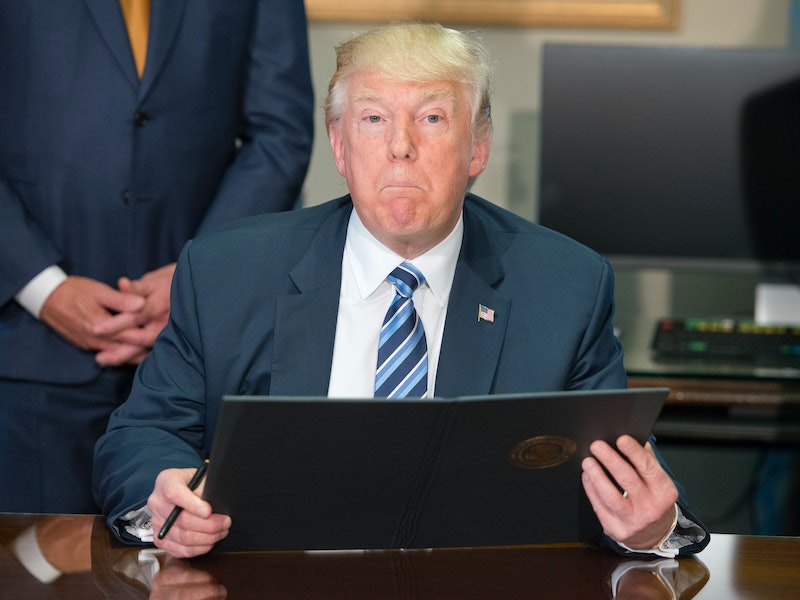 In one of his more shocking legal endeavors yet, POTUS announced his intentions to end the constitutionally-protected law of birthright citizenship on Tuesday. The announcement came in an interview with Axios, in which he declared that he had the ability to end this law via an executive order. But for those wondering whether Donald Trump can take away birthright citizenship through something as simple as signing an executive order, the odds seem extremely unlikely. What's more, it would require a massive overreach of the Trump administration’s use of executive power.

The 14th Amendment was made with the intention of ensuring that people of African descent would be granted citizenship, even if their parents had been slaves. Now, Trump is using birthright citizenship to wage war on the issue of illegal immigration.

It was always told to me that you needed a constitutional amendment. Guess what? You don't...You can definitely do it with an Act of Congress. But now they're saying I can do it just with an executive order.

Trump continued, "We're the only country in the world where a person comes in and has a baby, and the baby is essentially a citizen of the United States ... with all of those benefits." Axios noted that over 30 countries currently have birthright citizenship status laws in place. Trump then confirmed that the process to take away birthright citizenship was "in the works."

Trump's claims that he can change (or get rid of altogether) a constitutional amendment are completely unfounded. A roundup of 11 legal experts confirmed to Vox that it's legally unprecedented and illogical, within the established checks and balances of the government, to change an amendment with an executive order. Additionally, Paul Ryan spoke out against Trump's assertion later on on Tuesday. To Kentucky talk radio station WVLK, Ryan said,

You cannot end birthright citizenship with an executive order. As a conservative, I’m a believer in following the plain text of the Constitution, and I think in this case the 14th Amendment is pretty clear, and that would involve a very, very lengthy constitutional process.

With those opinions considered, it's still very possible that Trump could move towards signing an executive order in spite of everything; he has, after all, gone above the law on more than one occasion. What would stand in his way, if he did seek to establish an executive order, would be Congress, which is currently dominated by the Republican party.

One legal expert, Jessica Levinson, a professor of law at Loyola, suggested to Vox that it's more than mere coincidence Trump would bring this up a week before the midterms. She said, "This is not a genuine effort to change the law. This is a genuine effort to inspire President Trump’s voters to go to the ballot box on November 6."

That might be true, but it's also true that Trump does have at least some support for his idea from politicians who are currently serving in the House and Senate.

Sen. Lindsey Graham tweeted on Tuesday, "Finally, a president willing to take on this absurd policy of birthright citizenship." He then followed in Trump's footsteps by once more incorrectly estimating the number of countries who have similar laws in place, claiming that there were only two. Again, there are over 30 countries that protect the rights of those who are born on the nation's soil.