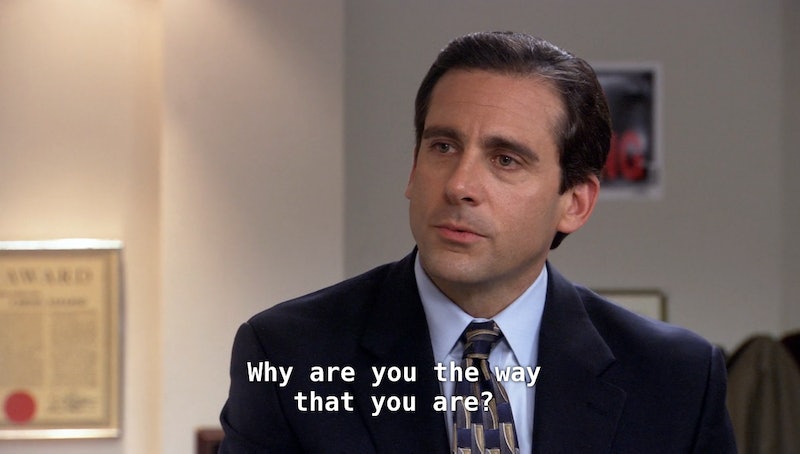 A few weeks ago, I tweeted that I was looking for fans of The Office who can't stop, won't stop rewatching the series, and that they should email me if they'd like to contribute to an article about their obsession. By the next morning, I had 32 messages in my inbox with subject lines like, "I will rewatch The Office until I'm dead" and "YES I WATCH THE OFFICE ON REPEAT AND I HAVE NO SHAME." I'd noticed that rewatching The Office seemed to be a very common activity, with fans posting about their rewatches on Twitter and memes about it popping up on Instagram. But why? Through emails from fans and talking to experts in psychology and media, I set out to find out why exactly rewatching The Office is such A Thing.

I get loving The Office. That part is totally understandable. After Season 1, NBC re-ran the entire six-episode season, and flipping around my parents' non-cable TV while bored one evening led me to find what is now my favorite comedy of all time. I watched every episode that aired that night. I was hooked.

I watched the show through to the finale, but for me and other fans, viewing The Office didn't end when the show did in 2013. In the time since it premiered, Netflix has taken over, and now fans like me can relive "Your dentist's name is... Crentist?" whenever we want. And whenever we want is, apparently, all the time.

Reading the responses to my question of "Why are you the way that you are?" as Michael Scott so elegantly put it, was like watching an episode of the show — I laughed, I cried, I recognized references and classic quotes. And, after viewing the over 40 emails I eventually received, it was clear that comfort, more than anything else was the reason people keep tuning back in. But, while nearly everyone expressed that they craved something familiar, the reasons for needing that comfort varied.

Some fans say they watch to relieve stress. "I swear I'm not a crazy person — just a girl who works on Capitol Hill, who relies on The Office to relieve me of all stressors before bed, while cooking, doing laundry, or just enjoying a quiet sunday afternoon," writes 24-year-old Mckinley.

Others talk about how it helped them cope with anxiety or mental illness. "It gives me 20 minutes of drowning out all of my anxiety, depression, suicidal thoughts," says Anna, 25. "I tried 15 medications, none of which provided any relief from my depression, but The Office has. The fact that I can still laugh over Michael Scott burning his foot on his George Foreman’s grill gives me hope that beneath all of these depressed feelings the real me is still there."

Another fan, Sara, who is now 22, explains that the show helped her through a death she experienced when she was 15: "I had just lost a member of my family to cancer and had no real coping skills or support system, so I legitimately spent a huge portion of that summer watching every season on Netflix."

Others said The Office was there for them through trauma or heartbreak. "Sometimes I go a month or two without watching, but I mostly started it as a way to kind of distract from trauma I was experiencing when I was young," writes Kathleen, 20. And Sahra, also 20, explains, "I watched the series for the first time the summer I graduated high school. I was going through my first heartbreak and as silly as it sounds The Office was there for me."

"I mean, I quoted the queen Pam Beesly Halpert in my wedding vows. I am truly a freak."

And, of course, there are much lighter reasons why fans watch the series, too. Erin, 26, bonds with her family over the show: "Every Christmas my family sits down after opening gifts and we watch every Office Christmas episode."

Then, there are the love stories. "Growing up, I remember hearing people say, 'There's a lid for every pot', and The Office demonstrates this idea well," writes 28-year-old Randyl. "Of course, like many, I loved Jim and Pam ... but the Michael/Holly and Dwight/Angela romances were what made me truly believe that there's someone out there for everyone."

And the show, for many fans, has moved beyond something we just watch to something that's a part of our everyday lives — it's even included in some of our major milestones. "I mean, I quoted the queen Pam Beesly Halpert in my wedding vows," Jamie, 30, writes. "I am truly a freak."

Like that last comment, some of the responses were self-deprecating, but it's clear that there's no need to be. If you think you're weird for having seen the entire series 15 times, there's someone else out there who quoted The Office in their high school yearbook. (It was me. I am that person.) But why this show? It's easy to say it's because of the characters or the jokes or the familiarity, but a lot of shows can provide that. Why is The Office the one where the connection is so strong?

Pamela Rutledge, the director of the Media Psychology Research Center, has an idea that goes deeper than just loving Michael's one-liners or Jim and Pam's love story. "The Office is an ensemble production, which means there are multiple psychological access points and emotional hooks to enter the world," she tells me via email. "People can identify with all sorts of situations in the context of office politics and interpersonal relationships." In other words, while you might relate to Jim's job anxiety one day, the next time you're watching, you might really connect with Kelly's situation with Ryan (if so, sorry about that).

Rutledge further explains that watching the show can actually have a physical effect on your mind and body: "Anxiety that might be generated by personal associations is alleviated through humor which changes our body chemistry, reducing stress and improving our sense of well-being." This speaks to the many responses from people who said watching The Office improves their mental health or helped when they were going through a tough time.

This could be why this GIF alone is enough to bring a tear to your eye:

But it's not just about the emotional experience and our subconsciouses getting used to the show. There is something particular about The Office's writing and production that sets it apart. Bustle Associate TV Editor Martha Sorren thinks the setting of the show provides a soothing quality that keeps people coming back.

"I have a theory that the contained set is a large part of why people rewatch The Office," she says. "You always know exactly what it's going to look like, who sits where, and what's going to happen when. It's a neutral resting place for your brain because everything always looks the same. There's no work for your mind to do, and therefore it's the truest form of relaxation TV."

Greg DePaul, who teaches Sitcom Writing at the New School and wrote the movies Bride Wars and Saving Silverman, also mentions the workplace setting, but thinks the show being incredibly detail-oriented is part of what makes fans rewatch.

"There's a bajillion short sitcoms and plenty of workplace comedies with light subject matter and relatable characters. The Office endures because the writers and actors strenuously focused on the small stuff," he says. "They have entire episodes about otherwise trivial stuff like who took whose office supplies and how employees react during a fire drill. ... That's a staple of good comedy — observing what's funny around us in the everyday world and highlighting it. The Office does that better than other shows."

"Even if I’ve seen an episode 100 times, I notice something new every time."

DePaul adds that the timing was right for a show like The Office to become so ubiquitous because of advances in technology — streaming, being able to watch a show on a phone or laptop from literally anywhere — that didn't exist until recently. (This is also shown in the ages of the fans who responded to my inquiry; many would have been in middle school or younger when the show premiered.) Fifteen years ago, you could only catch old shows when they re-aired on TV.

"Now you can avoid what's hot this week and watch anything from the last 60 years of TV," DePaul says. "The fact that The Office keeps compelling people now — after it's over — shows its strength among a massive range of choices."

Sometimes, though, it's the range of choices that makes people keep watching The Office. One fan, Alli, 21, mentioned "option paralysis" — scrolling and scrolling through Netflix but not actually landing on anything because of the sheer number of options. She writes about being faced with trying a new show: "What if I don’t like it? Do I want to potentially waste my time when I could watch something I know for a fact I like?"

This is very true for a fan who already knows the show, and with The Office, it's very easy for a person to become this level of fan — quickly. Just like I got immediately hooked on a random night at home, anyone can get roped in at any point, even now, five years after the show ended. Khal Davenport, a senior editor at Complex, started watching in the middle of the series, but it didn't matter. "There aren't a huge number of shows that are able to progress a story but be as accessible as it is for first-time viewers," he tells me, adding that streaming was the reason he was able to catch up.

The show is layered, so what viewers get from it can vary on every viewing. "Even if I’ve seen an episode 100 times," Brittany, 24, writes, "I notice something new every time in the way someone reacts, or even what someone is doing in the background."

It really has it all, and that just becomes more and more apparent each time you watch. "The Office just hits the right buttons," Davenport says. "If you want some absurdist quirky shit, you've got that. If you want bonafide love stories, it has that. If you want heartwarming friendships or just hilarious comedy, they've got you."

The Office becoming such a rewatch phenomenon has to do with a perfect storm of things — timing, technology, characters, humor, comfort, coping. And now that we live in a time where we can have the feelings it gave us (and continues to give us) over and over again, why wouldn't we take it up on that whenever we can?

The Office is always there and it's always unchanged (yes, even if that revival happens, the original series is still the same). Alli, the same fan who mentioned "option paralysis", tells me she hasn't even watched the finale, because it leaves something untouched. "I like knowing that there’s one episode that is still totally foreign to me. I've come close to watching it a few times, but I'm just not ready for it all to be over!"

We might not all go to such lengths, but if it was possible for the show to truly disappear out of our lives (or, you know, leave Netflix), it would be a major blow. Usually with TV shows, you might think that one viewing is enough; with The Office, a lot of people really need it.

"In one episode Jim asks Pam what movie she would take to a stranded island with her that she could watch forever and never get sick of," writes Emily, 23, summing up the entire situation with a reference, like any true fan should. "I would pick all seasons of The Office."

She's far from the only one.