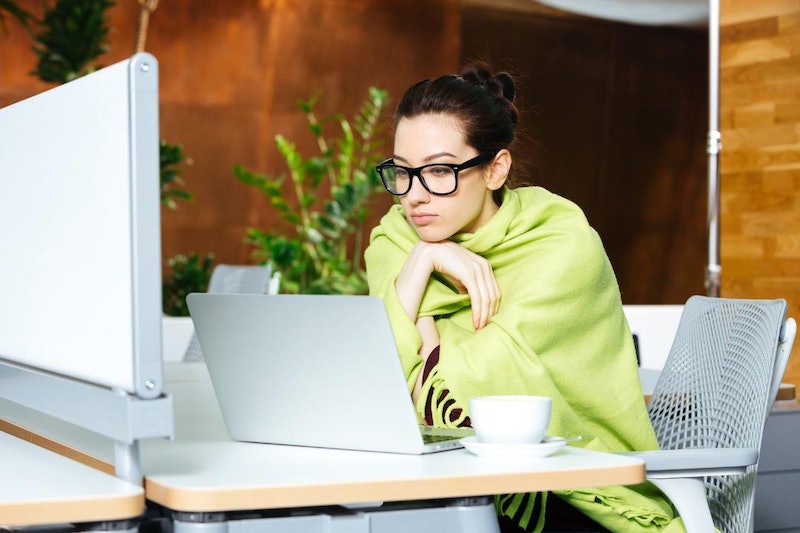 Some people roll their eyes when I tell them that cold weather and cold buildings make me miserable. While you might think me overdramatic, an aversion to cold is a real thing. But, can you be allergic to cold? The journal Climacteric published a study about a woman who broke out in hives after her co-workers cranked the air conditioning in her office. After seeing her doctor, the woman was diagnosed with a rare condition called cold urticaria, which is an allergic reaction to cold air, water, and objects. So if you work in one of those offices that's freezing all the dang time, you might now have a legit, medical reason to ask them to turn up the temp.

A skin reaction brought on after exposure to cold, cold urticaria can cause red itchy welts and other unpleasant symptoms. "People with cold urticaria experience widely different symptoms," the Mayo Clinic explained on its website. "Some have minor reactions to the cold, while others have severe reactions. For some people with this condition, swimming in cold water could lead to very low blood pressure, fainting, or shock." If this has happened to you, it's not all in your head, and you can officially tell those who doubt that your aversion to cold is negatively affecting your wellbeing that cold urticaria is a real medical condition backed up by science.

Aside from swelling and hives, cold urticaria can also cause symptoms such as an increased allergic reaction as the skin warms, swelling of hands while holding cold objects, headache, fatigue, and swelling of lips from consuming cold food or drink, according to the Mayo Clinic. In severe cases, the allergy can lead to anaphylaxis, which can cause fainting, a racing heart, swelling of limbs or torso, shock, and swelling of the tongue and throat, which can make it difficult to breathe. While the disease is rare, sufferers can even develop symptoms from seemingly benign exposure to cold.

"For example, symptoms can be triggered when the forearm touches a table or the thighs touch a toilet seat," Dr. Markus Magerl told the European Centre for Allergy Research Foundation. "The higher the threshold value, the more severe the symptoms." If there was ever a valid excuse to relocate to a warm climate, this is it. One woman posted on the website Rare Daily that she was diagnosed with cold urticaria when she developed symptoms after swimming. "I got light headed, hives all over my body, and my body burned," she explained. Others posted that they always make sure to carry blankets, hats, gloves, and scarves with them in case they are subjected to a cold environment, like a movie theater.

What's more, temperatures that most people would consider warm can trigger allergic reactions in people who have cold urticaria because it's more about temperature variations than extreme cold. "On the Fourth of July, I went over my best friend’s house, and his pool was 80 degrees. I checked the temperature, and I was in his pool for 15 minutes when I started noticing that my vision was getting blurry," Cara Yacino told The Weather Channel. "I got out quickly, and I noticed my whole body was covered in hives. I almost needed to use the EpiPen, but I ended up taking my cyproheptadine [a prescription allergy medication], and it went away in like 10 minutes. But it was pretty scary."

Despite displaying visible and dangerous symptoms, Yacino noted that some people still aren't convinced that her condition is real. "A lot of people who have this feel that it hasn’t been taken seriously or even believed. I’ve had people be like ‘no, no you’re joking.' It’s not fun." The Mayo Clinic advised those who have cold urticaria to proactively take over-the-counter antihistamines, protect skin from sudden changes in temperature, test their hand in water before swimming to gauge the reaction, avoid cold drinks, carry doctor-recommended rescue remedies if their reactions are severe, and to inform doctors about the condition prior to any medical procedures so they can limit exposure to temperature changes. What's more, you can develop the condition at any age so it's important to see your doctor ASAP if you have the aforementioned symptoms after being exposed to cold. Because, #TheMoreYouKnow.