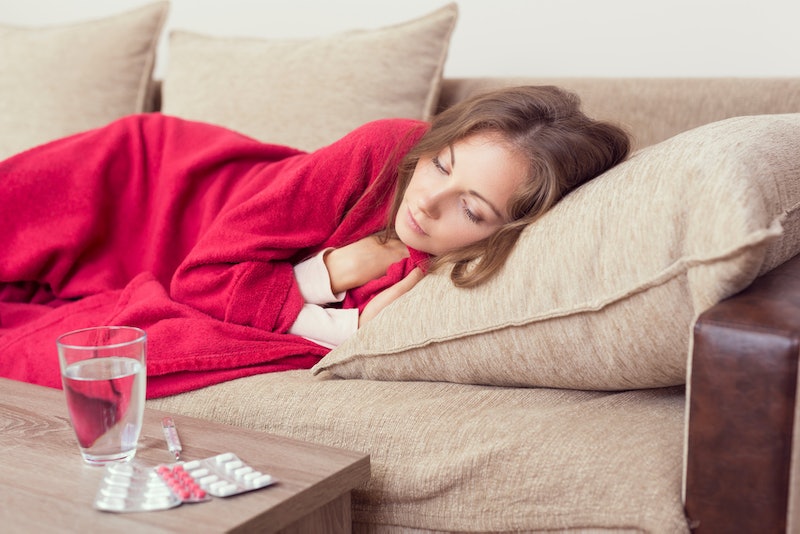 No one wants to catch the flu, but one upside of getting a mild case early in the season is that you can't catch it again — right? However, you can catch the flu after you've already had it, thanks to the way the influenza virus works. Every year, different strains of influenza circulate around during cold weather. Theories abound as to why flu is so prevalent during colder seasons, but it's thought to be something to do with the fact that viruses can often survive well in cold, dry air. The flu vaccine is tailored annually to the groups of influenza that are particularly prevalent that particular season, which is one of several reasons you should make sure you get one every 12 months, sharp. Yep, even if you "never get sick."

The Center for Disease Control explains that there are four strains or families of influenza: A, B, C and D. The strains actually differ quite a lot. "Human influenza A and B viruses cause seasonal epidemics of disease almost every winter in the United States," says the CDC. "The emergence of a new and very different influenza A virus to infect people can cause an influenza pandemic." Meanwhile, influenza C isn't actually that bad (symptoms are pretty mild and don't feel like "real" flu), while influenza D is rarely found in humans at all.

The reality is that if you've had influenza A or B already this season, your body will have developed antibodies that make it unlikely for you to get the same strain again. Antibodies are specific immune responses to a particular thing, and you develop them in response to threats like bacteria and viruses. The bad news, though, is that having influenza A won't protect you against getting influenza B later in the season, and vice versa.

The antibodies generated by each strain of flu are pretty specific and can't help you against flus from another family. Dr Denise Pate told Health that once you've had a strain of flu once, "[y]our likelihood of getting the same flu again is lower. However, you can become infected with a different strain, and the antibodies you formed from the first bout are not providing protection." It's not common, but it can happen.

This, says infectious disease expert Dr. Pritish Tosh at the Mayo Clinic, is one of the biggest reasons to get the flu vaccine every year. Trivalent and quadrivalent flu vaccines are formulated to protect against multiple strains at once. The CDC recommends that you get the flu vaccine early in the flu season because it takes about two weeks for the antibodies to work, but even if it's late in winter, you should get it anyway, for added protection.

The 2018 flu season was a pretty severe one, according to LiveScience, and the 2019 season is proving to be intense too. To lower your risk of flu, get the vaccine early — and don't decide that one bout of flu means you're protected for months. You may encounter somebody with a different strain and end up in bed all over again.