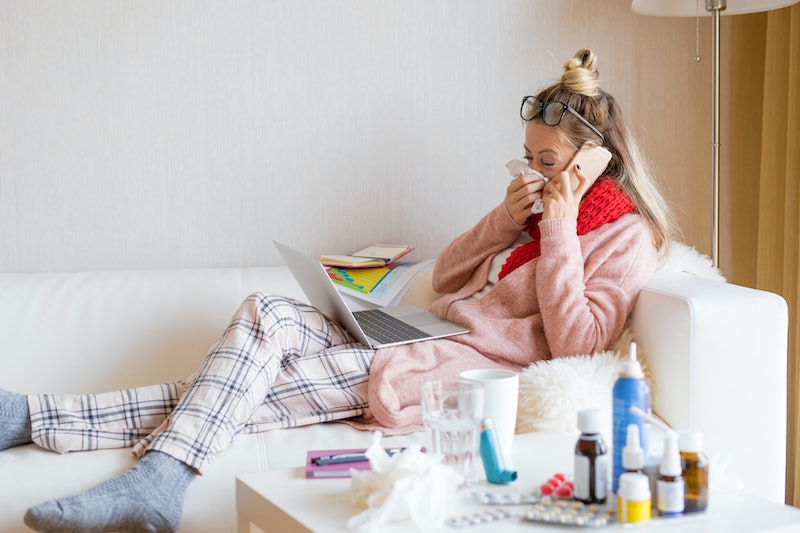 Every flu season, you stock up on your favorite home remedies — chicken soup, echinacea, warm honey, and serious OTC medicine — and aim to keep clear of anybody sneezing on the subway. However, it's called cold and flu season for a reason — and it is technically possible to have both at once. While it's very rare, you can have the flu and a cold at the same time. It's not pleasant or common, but it happens.

To understand how you can have the cold and flu at once, or multiple illnesses at once for that matter, it's first necessary to understand what colds and flu actually are. There are many kinds of viruses that make up colds: up to 200 sub-varieties exist, according to the Guardian. The vast majority of the world's sniffling, though, is caused by one virus: rhinovirus, which one study in 2007 estimated as the virus behind over half of global colds. The family of rhinoviruses were first discovered in the 1950s, and nope, we're still no closer to a vaccine.

The flu, by contrast, is also a virus, or technically speaking three: influenza A, B or C. The vaccine for flu you should get every year includes the A type and various varieties of B, and each year the flu shot is specifically tailored to the strain of virus that researchers predict will be most common that year.

If you do get a strain of a cold and the flu at the same time, the immune system reacts in particular ways. Immunologist Dr. Kevin Bonham explained in 2013 that if you get both, it's called "a superinfection." If the two viruses you get are very similar, like colds and flu, he explains, the first stage of your immune system's response should be the one that kicks into high gear. The body will go into what's called an “antiviral state," basically red alert, and fight off the two viruses in identical ways. The second stage will target the two viruses specifically.

It's the antiviral state that makes getting two viruses at once reasonably unlikely, though. Experts at Science Focus note that when you're fighting off one rhinovirus, your body's immune system is activated and "makes conditions inhospitable" for any other virus that tries to take hold. So having a cold on top of the flu can happen, but it's considered pretty rare.

On the other hand, different categories of infection aren't covered by this antiviral state. This is why bacterial infections tend to happen to people who are already weakened by viruses; if you've ever had an ear infection while you're dealing with a cold, you'll know how this goes. The body's immune system is so busy dealing with the impacts of the virus that it leaves itself a bit more vulnerable to bacterial infections.

One way to keep yourself from getting the flu and a cold at the same time? Get your flu shot, if you're able. Not only will it protect you from getting the flu, but it will also prevent you from spreading flu germs to those around you who may be immunocompromised, or otherwise unable to get the shot. Further, keeping up the strength of your immune system to prevent multiple viral infections is a good idea. Make sure you get lots of sleep, and don't assume that already having a sniffle keeps you protected from somebody else's cold.

More like this
This Psychological Effect Might Be Keeping You From Hitting Your Goals
By Lexi Inks
The Historical Meaning Behind Why Autumn Is Called ‘Fall’
By Chelsey Grasso
Got Brain Fog? Here Are The Best Supplements For Memory & Cognition
By Carolyn Steber
Rachel Zegler Reveals She Had Breast Cancer Scare
By Radhika Menon
Get Even More From Bustle — Sign Up For The Newsletter