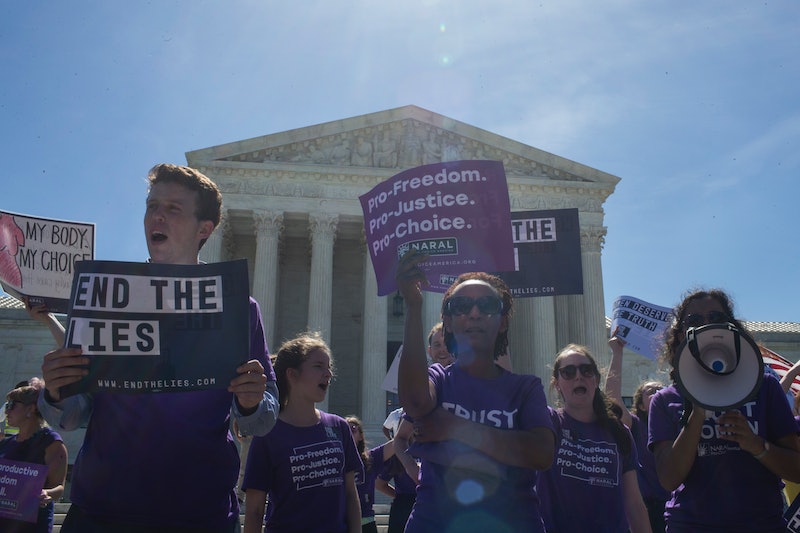 As Missouri's last abortion clinic struggles to keep its doors open this week, there's been a lot of uncertainty when it comes to the future of abortion access in the state. And recently passed abortion restrictions in other states across the country only make these concerns worse. But despite the confusion, one thing is clear: You can still get an abortion in another state if you live in Missouri.

To be entirely clear, abortion is still legal in all 50 states. In recent months, however, Missouri and several other states have passed severe restrictions on abortion, including a near- complete ban on the procedure in Alabama with no exceptions for cases of rape and incest. Most of those laws are being challenged in court, and some of them use language that's already caused uncertainty among legal scholars as to exactly what the laws do and don't do. Some have suggested that certain new laws could result in pregnant people being prosecuted for traveling to other states to get abortions, but it's not clear.

That's not the case in Missouri. The state's recently-passed abortion law, which bans the procedure after the six-week mark, specifically says that pregnant people will not be prosecuted for having abortions, according to Politico. BuzzFeed News reports that the same is true of the Alabama law.

In Georgia, things aren't quite so clear. Georgia's law also bans abortions after about six weeks, but unlike the other laws, it doesn't explicitly shield pregnant people who have abortions from prosecution. In addition, Georgia grants personhood to fetuses with cardiac activity by designating them "natural persons." As such, some have argued that law enforcement officials in Georgia could press charges against women who have abortions in other states.

"If a Georgia resident plans to travel elsewhere to obtain an abortion, she may be charged with conspiracy to commit murder, punishable by 10 years’ imprisonment," Mark Joseph Stern writes at Slate. "An individual who helps a woman plan her trip to get an out-of-state abortion, or transports her to the clinic, may also be charged with conspiracy."

But in an interview with the Washington Post, Planned Parenthood's Staci Fox argued that the law "could not be used to successfully prosecute women," according to the Post. Moreover, as PolitiFact notes, several district attorneys in Georgia have publicly that they don't intend to use the law to prosecute women who have abortions.

And yet Douglas County District Attorney Ryan Leonard told the Daily Report that, under his office's interpretation, Georgia prosecutors could indeed press charges against women who have abortions under the new law. He said,

Women need to be made aware. You may not agree with the law. But whether you agree with it or not, it could potentially result in serious consequences if you violate the law ... The only way to be 100% sure you’re not prosecuted under it is not to have an abortion. That’s the way the law stands today.

Ultimately, it's simply too soon to say whether or not the Georgia law will be used to prosecute pregnant people who travel out of state to have abortions, while in Alabama and Missouri, it's clear that such prosecutions are off-limits.

It's worth noting that the abortion laws in Georgia, Alabama and Missouri still haven't taken effect, while a similar law in Mississippi has been blocked by a federal judge. As such, abortion is still legal in every state in America.