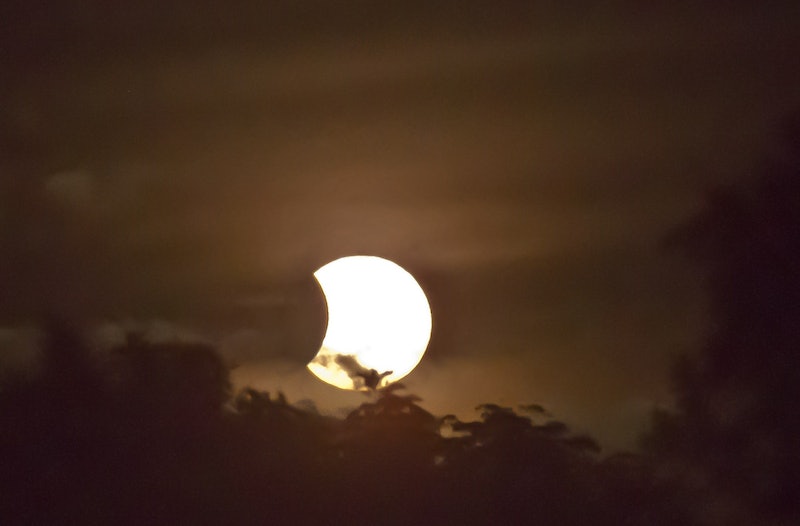 The Great Eclipse is coming, and while people are busy making plans for how best to witness this rare celestial event, let's take time to clear up an important and persistent question: Can you go blind from looking at a solar eclipse? I don't want to alarm you but the answer is kind of... yes.

Although it's highly unlikely looking straight at the eclipse will result in total blindness, the light from an eclipse can seriously damage your eyes. It causes solar retinopathy, a condition that occurs when bright light molecules kill cells in the retina, leading to blurry or spotty vision. Most of the time, these symptoms clear up after a few days or weeks, but for some, solar retinopathy causes permanent damage.

Take, for example, Lou Tomososki. He and his friend Roger Duval were walking home from school in 1962, when they looked up at a partial eclipse without any protective glasses, partially blinding them each in one eye. Now, at 70, Tomososki still suffers vision problems from that day.

“It doesn’t get any worse and it doesn’t get any better,” he said. “You know how the news people blur a license plate out? That’s what I have on the right eye, about the size of a pea, I can’t see around that.”

Solar retinopathy doesn't only occur during an eclipse, and contrary to popular belief, the sun's rays are not any stronger when the moon passes in front of it. People are more vulnerable to the condition during an eclipse because it's easier to stare at the sun for longer periods of time when it's partially covered, and because our retinas don't have any pain receptors, we can't feel if they're being damaged.

This doesn't mean that on Monday you have to choose between your eyeballs and witnessing the first total eclipse visible from the continental U.S. since 1979. There are a number of ways to safely view the eclipse, like certified eclipse glasses (make sure to get them from a reputable vendor), pinhole cameras, though a telescope with a solar filter, or even under a tree.

Check out how to safely view the eclipse here.