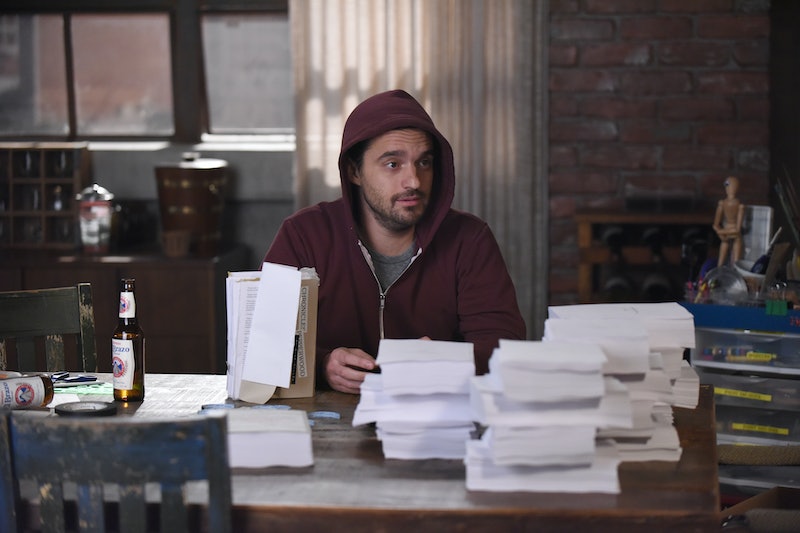 Nick Miller has come a long way from his first novel, Z Is For Zombie, which had the word "rhythm" spelled incorrectly 38 different times. He is finally starting to find his voice as an author. While you can't buy The Pepperwood Chronicles from New Girl, the show has really given this bizarre saga a life of its own.

The character is inspired by Julius Pepperwood, a character and alter ego that Nick made up back in Season 2. Back then, he was a zombie detective. Now Pepperwood is, by Schmidt's description, "a hard-boiled Chicago cop turned New Orleans detective, racing around on fan-boats, drowning that two-faced DA in a bucket of jambalaya" who finds JFK alive. Nick describes him as a man just "fighting with the alligator within." According to Tuesday's episode "Young Adult," there is a character named Bayou Sue and a gay dog.

Nick says that its about "life, race, and the sexualization of the American handgun." Tuesday's episode also revealed that he thinks his audience is lighthouse keepers and railway workers — the "men who built this great country." In actuality, his writing appeals most to teenage girls who praise the mystery, the romance (there's a makeout scene at a levee), and his depiction of female desire. Here's what else we know about Nick Miller's magnum opus.

It Has A Forward

Which informs readers that The Pepperwood Chronicles is "best enjoyed with shrimp cocktail."

There's a section where Nick just transcribed the local news without changing the names of any anchors, and had Pepperwood watch TV.

Not Somebody You Introduce To Mom & Dad

The Pepperwood Chronicles has an antagonist named Schmith — a "grotesque, unlikable dirtbag" who may or may not be based on Schmidt.

There's also a scene in a fish morgue, and a woman named Lady Diamante.

"The murderer's name was in the song."

What does it mean??

Reagan doesn't remember, but it's an incredibly graphic sex scene.

"The sun baked down on Pepperwood's back as he moved over to the St. Charles streetcar. The driver handed him a brown paper sack. Without opening it, Pepperwood knew what was inside: blood-soaked beignets."

Maybe one day we'll get to read more. Until then, I cherish just about every hilarious bit of information about The Pepperwood Chronicles on New Girl. It's good to see Nick succeeding at something, as absurd as this fictional world may be.