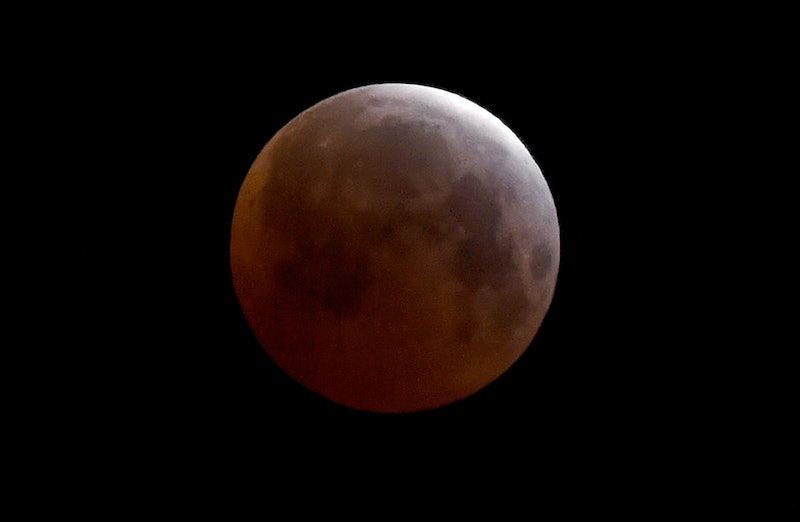 The powerful cosmic month of June is host to a very special new moon — that is, a super new moon. But just because it's super doesn't necessarily mean that you'll be able to see the June new moon.

On June 13, at 3:43 p.m. EDT, the moon will rise, and its darkened side will face us here on Earth. In other words, as far as lunar events go, a new moon isn't much to look at — we'll literally only see the moon's shadow, and even then, it's unlikely you'll be able to locate it amidst the equally dark night sky. The fact that it's a supermoon as well as a new moon only means that it's occurring at at time that the moon is at its closest approach to Earth — so, though it'll technically appear to be closer to the Earth than most moons, anyone gazing at the sky won't be able to see a larger moon.

That said, that doesn't mean that come June 13 you'll have nothing to gaze at in the night sky. With the moon out of the spotlight, the stars will actually be the stars of the sky, for once! Without the moon's illumination, the stars have an opportunity to show off and stand out — bright and crisp against a velvety, dark back drop.

According to Sky & Telescope, with the moon obscured by shadow, Arcturus, the fourth brightest star in the night sky who shines bold and golden, will be standing out in the upper southwest portion of the sky. If you can find Jupiter, it will be to the upper right of the planet. Binoculars will certainly help, but if you simply look up, Arcturus might stand out to the naked eye — especially if you go stargazing in a place with minimal light pollution (aka, as far away from city lights as possible).

On June 14, the moon will still be at one of its closest approaches to Earth, but it will no longer be in complete shadow. So, you might get a chance to see a special sliver of a crescent of the June young moon.

According to Space.com, just after sunset, on June 14, the very young crescent moon will sit just barely left of Mercury in the sky. If you look up between 9:30 and 9:50 p.m. EDT, you might be able to catch a glimpse of the impressive baby moon. The crescent should look larger and more illuminated than usual thanks to its near distance, but again, it will be hard to see. If you're really committed to seeing something, you'll have to head outside before the sun sets because your best chance of seeing the crescent moon is directly after the sun sets and darkness takes over the sky. You'll miss it if you're not waiting for it.

If you're into the spiritual implications of the super new moon, you'll be happy to hear that June's super new moon is only the first of three this summer. July 13 and August 11 will also host super new moons. Astrologists believe that the super new moon is an important time to pause, take a breath, and hit the reset button. If you've become distracted or carried away with the events of your life, the super new moon is a powerful time to reconnect with yourself, be present and refocus your efforts a bit so that they are in line with your true self. It's all too easy for us to get in the swing of things and lose sight of what we're even striving for and why.

So use this summer's super new moons as check-in times with yourself. If things have become chaotic and unfocused, recenter them, clear away the smoke. And without the moon, don't forget to go outside and take a look at the stars. There's a metaphor in there somewhere.