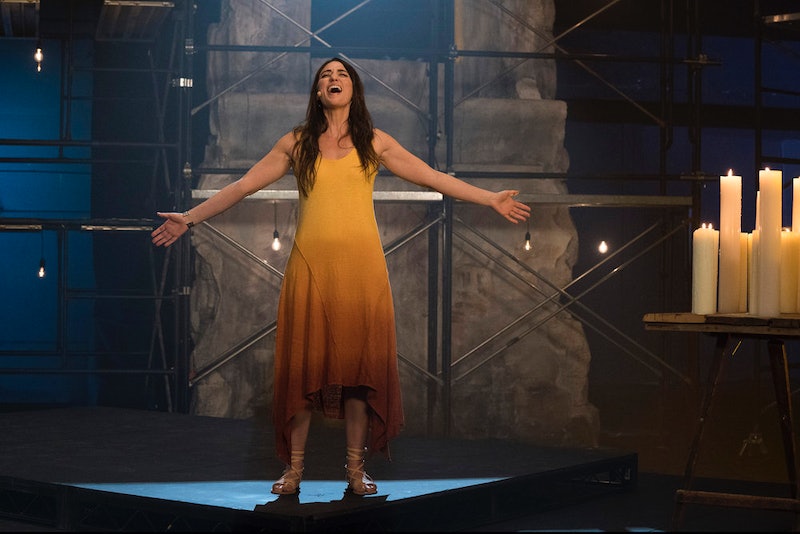 Hello, Broadway fans. The next big live musical TV event is here, and NBC is adapting the 1973 Andrew Lloyd Weber/Tim Rice rock opera Jesus Christ Superstar. (And on Easter and Passover, no less!) The April 1 special stars John Legend as Jesus; Brandon Victor Dixon as Judas Iscariot; and Sara Bareilles as Mary Magdalene. With such a talented cast, you’re going to want to hear every note they sing, possibly over and over again. So can you stream the Jesus Christ Superstar Live In Concert soundtrack?

You can, of course, stream the original Broadway show cast album on Spotify and I strongly suggest that you do before the show. It’s truly fantastic, and you’ll get a feel as to how the production has evolved — it sounds a little grittier than what we can probably expect from the more polished NBC production, but it’s a nice preview. It’s the same songs! Luckily, though, if you want to download the newest cast album, you have to wait just a little bit — the soundtrack will be out on iTunes on April 6, and though I couldn’t find any concrete information on streaming services, it's probable that a Spotify release is sure to follow. For a limited time, you can preview three songs from the concert on iTunes: “Superstar,” “I Don’t Know How To Love Him,” and “Gethsemane (I Only Want To Say)." Get streaming now, because there’s no telling how long those will be there.

Jesus Christ Superstar Live In Concert is quite the undertaking, and even though everyone on the stage has been singing for audiences forever, singing for millions and millions of people at once has to be pretty nerve-wracking. Of “Gethsemane,” Jesus’s biggest number in the show, Legend told USA Today that it's hard to perform both physically and emotionally. “Singing ‘Gethsemane’ is especially hard when you're recovering from a cold," the artist said. "Emotionally, the subject matter is tough, because it’s previewing the fact that he’s about to die, and he’s questioning why it has to happen and he's talking to his Father. But physically as well, it’s quite a challenging vocal number." In an interview with The New York Times, Legend also reflected on the difference between this special and what he normally does. The hardest part now was just learning all the material," he said. "I’m so used to performing songs that I wrote for myself."

“I Don’t Know How To Love Him,” Bareilles’ big number, is an iconic song sung by many women in many pageants, and Bareilles knows she doesn’t have to do much to make it beautiful. "The song itself is an 'if it ain't broke, don't fix it' kind of scenario, so it's really just about trying to bring an honest interpretation of the lyric and storytelling that's already there to life," Bareilles also told USA Today. "It's just a simple, beautiful moment in the show, and I feel special that I get to be the one to do it."

USA Today notes that NBC’s The Sound Of Music brought in 18.6 million viewers, and NBC are hoping that Jesus Christ Superstar Live In Concert will be the same. "The Sound of Music was such a revelation out of the box," executive producer Neil Meron said. "Ratings aren't as high these days for practically everything, but in the realm of producing these for the network, they're still very, very buzzy events and have a very significant audience that tunes in. We are still spreading the gospel of musical theater and for us, that's a reason to continue to do it."

Doing an Andrew Lloyd Weber musical is like making one of those pre-packaged box meals. You have everything you need in front of you to succeed — you just have to take what you know and not mess it up. That’s what the cast of Jesus Christ Superstar Live In Concert will do this weekend, and it will be a beautiful thing. And afterwards, you'll have the proof to listen to for years to come.