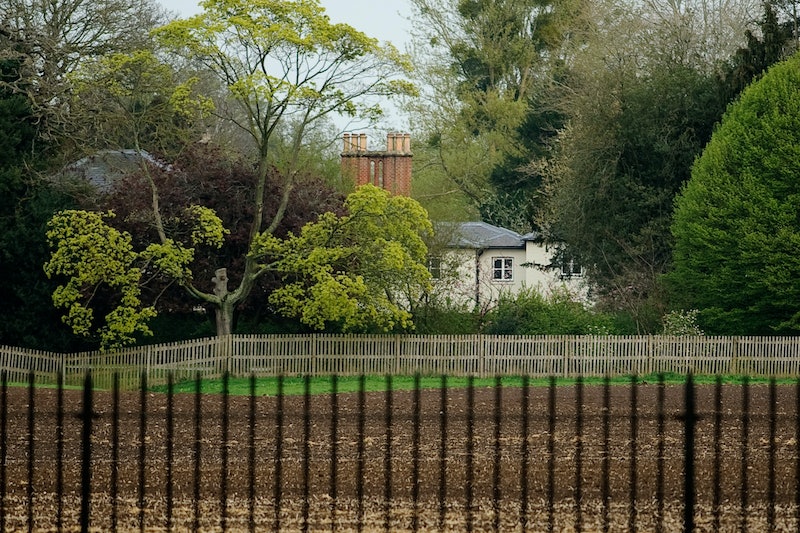 Prince Harry and Meghan Markle reportedly moved in to their new home at Windsor last week, and while there aren't really any photos to showcase the renovation that the royal couple's new home has been under it sounds like the perfect place for the Duke and Duchess to raise a family. But like with many of the royal residences that dot the country, I can't help but wonder... can you visit Frogmore Cottage?

It looks like the frogs will be the only unwanted visitors for the royal couple to deal with, as the public will not be able to visit their abode. However, you can visit one of the main buildings on the estate — Frogmore House. Y'know, the beautiful royal residence where Harry and Meghan held their wedding reception last year. Unlike Windsor Castle, you can only visit Frogmore House during charity open days which occur three times a year. As detailed by the Royal Collection Trust, the 2019 open days fall on May 28, 29, and 30 for the National Garden Scheme, the British Heart Foundation, and the National Rheumatoid Arthritis Society.

Although, for groups of 15 or more people the house is available to visit only in August when pre-booked. In both instances, visits typically last two hours and on the charity days there's an opportunity to picnic in the surrounding Frogmore Gardens — a place that the Queen has described as a "wonderfully relaxing environment" and one that is special to the royal family.

It's no wonder then that Duke and Duchess have decided to move from Kensington to Windsor. From it's rich royal history to being close to one of the Queen's many residences (she stays at Windsor Castle for a month over Easter), the couple will be able to appreciate the seclusion that their Grade II-listed home will bring while also being close to their loved ones in a familiar setting. As Kensington Palace described in a statement last November, "Windsor is a very special place for Their Royal Highnesses and they are grateful that their official residence will be on the estate."

According to the Daily Mail, it has been much easier for Harry and Meghan to move as Harry "is no longer a direct heir to the throne and can be freer with his choices." While their offices will remain in Kensington — which is 25 miles away from Frogmore Cottage — the Duke and Duchess of Cambridge "must have a permanent base in the capital" due to William being second in line for the throne. But it's not as if a commute of 20 to 30 minutes will make life harder for the royal couple anyway.

Above all else, the move to Windsor marks another important chapter for Harry and Meghan's life. While they'll probably have to get adjusted with not living as close to William and Kate and their children, it's equally as perfect as Kensington is to raise a royal family.

Let's just hope they give us some insight to the cottage on their Insta.