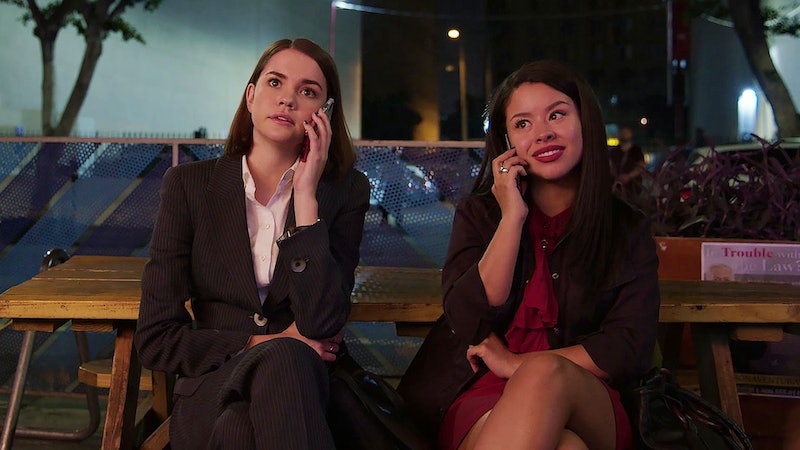 While the UK has its fair share of shows to make the rest of the world jealous about, I can't help but feel FOMO when my US pals talk about some of theirs. The Fosters' new spin-off show Good Trouble is one of those. If you were a fan of the OG drama series, which followed a lesbian couple, a policeman, and a school vice principal in their attempt to raise one biological and four adopted children, then there's no doubt you're craving this too. If you want to catch up, here's how to watch Good Trouble in the UK.

When Refinery.29 referred to Good Trouble as "like The Fosters but sexier," from their review of the season premiere, I knew I was in for a seriously good show. US critics are raving about it, including TV Guide who praised it for being "what all spin-offs should be. It's the continuation of a story we love, but from a new angle, and is entirely capable of standing on its own."

And I've yet to even mention its whopping 100 percent Rotten Tomatoes rating, so now I'm in even more of a frenzy to get my lil British hands on this season of Good Trouble.

Like me, you should add it to your watchlist on TV Guide, since it's not yet been made available on the site's suggested place to watch it — Google Play — where it should be available to stream soon. It's unknown how long you'll have to wait to watch, and some fans over here are already getting impatient. On tweeted: "I really want to watch good trouble because you know post-graduation characters but ueghhh no UK broadcaster #GoodTrouble," on Jan. 8.

Some UK fans have already reached out to Netflix UK to let them know the demand for the spin-off, including one Twitter user who tweeted the company with the astute observation: "You already made @noahcent happen — give us the origin story! Please?" on Jan. 24. "Corner that market!" they said, and I couldn't agree more.

So far, the company's staying out of this one, as they've yet to reply. Peter Paige, the brains behind Freeform and Good Trouble might be the only one from the team to reply to his inquisitive British fans — as far as I can see. When one tweeted him: "Will we ever see The Fosters or Good Trouble in the UK?" on Jan. 15, he simply replied: "I don’t know — I sure hope so!" So, c'mon UK broadcasters, take the hint already.

I reckon that the more broadcasters are pestered to bring Good Trouble to the UK, the more likely they are to actually give in. There's a sizeable portion of the population who are dying to see the adopted kids all grown up, and if you're part of it, you should get tweeting and demanding right now. Otherwise, you'll have to catch a flight to the US to catch up with the new season on your pal's couch. Drastic measures, I know.