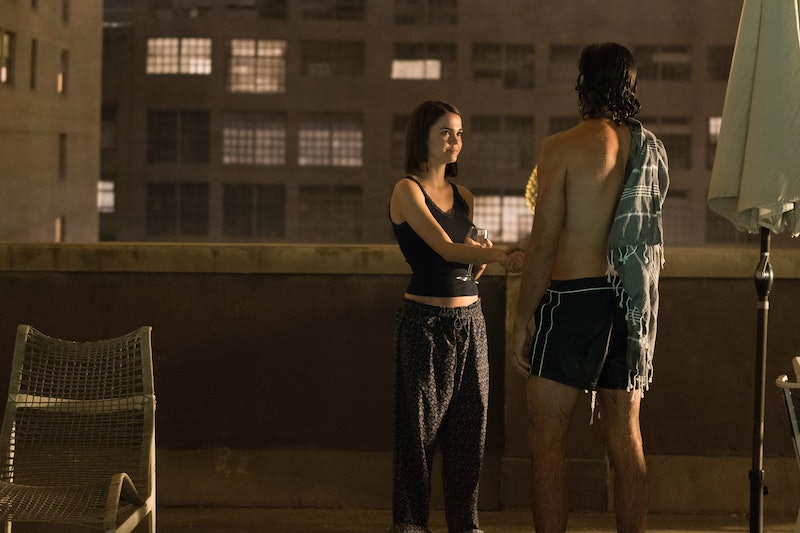 If the second episode of Good Trouble is any indication, this The Fosters spinoff will not be shying away from tough topics (but then again, neither did The Fosters). The potential love triangle between Callie, Mariana, and roommate Gael has been squashed, as Mariana gave her sister free reign to pursue this hot new stranger. But there’s one complicating factor for Callie — Gael’s bisexuality on Good Trouble could be a deal breaker for Callie to move forward. And that would be a shame, given that it seems like she might have more issues with his lack of monogamy than his sexuality. But she's having trouble differentiating between the two things.

Callie and Mariana’s family at home has multiple LGBTQ members — their brother, Jude is gay and they were raised by two lesbians — so to have Mariana say things like she could never date a man who slept with other men because she’d be insecure about him looking for what “another man could give him” is sort of unexpected. You'd think she know better. Callie is also unsure about Gael, telling her brother, Jude, “I like him. But I don’t know how I feel about having sex with a guy who has sex with other guys.”

One would assume that Callie and Mariana would be more understanding, given their familial makeups, but they’re still working through their own biases and prejudices. Being young is all about figuring out how you feel and why, and here, Good Trouble highlights the complicated nature of all the growing up they still have to do. And how even well-meaning allies to the LGBTQ community still struggle to overcome assumptions and stereotypes about bisexuality.

Callie firmly says that she’s not bi-phobic, but her hesitance to date Gael because of his sexuality is rooted in old stereotypes about bisexual people. Then again, getting into any relationship is scary, especially if you have trust issues and are prone to jealousy, no matter the other person's sexual orientation. If anything, it seems more like Callie just doesn’t know how to measure her feelings for Gael with the fact that he’s dating other people… including Bryan, the man that Callie and Mariana saw Gael having sex with. These are the sort of things to expect from the series going forward.

In an interview with Seventeen, Tommy Martinez, who plays Gael, was glad to have his character’s sexuality as a focus on the show. “Working alongside Michael Galante, who plays Bryan, and just going into it not judging the characters or anything, and being deeply open minded, it was a really, really beautiful time,” he said. He added that he was excited to get to explore gender, sexuality, and work on a show that really wanted to just show how people love each other. "It was a really incredible time," Martinez said.

Cierra Ramirez, who plays Mariana, told Seventeen, “It definitely causes some conversation, but the feeling and emotion that both of those characters felt was real and true and raw and it’s hard to deny that.”

Throughout these conversations, Good Trouble remains absolutely sex-positive. Callie and Mariana’s immediate confusion and reactions in terms of dating a bisexual man isn’t hateful, and the show does well to not portray it as such. Good Trouble is showing its progressive nature by eschewing what would be the traditional love triangle between Gael and the two sisters in favor of a love triangle in a world where labels are frequently falling by the wayside.