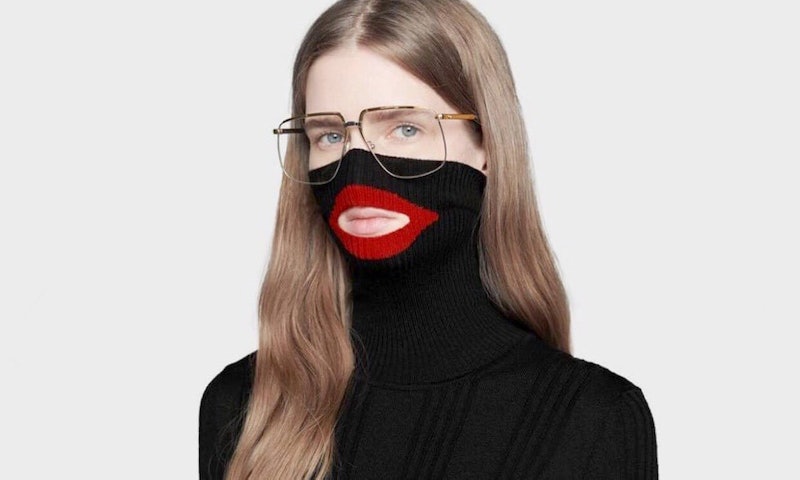 When it comes to luxury purchases, black people in the U.S. have a lot of spending power — reportedly contributing $151 million of a $679 million industry annually, a 2018 Nielson study reported. On top of that, the findings also noted that black consumers' shopping choices tend to have a "cool factor" that can influence mainstream customers. So clearly, even if you're only examining things from a business standpoint, it's obvious that companies have a lot to gain by appealing to a diverse customer base.

Yet in 2019, some luxury labels have been unable to escape allegations of in-store racial profiling and accusations of the clothing itself depicting blackface. It all raises the broader question: How much do fashion brands authentically value diversity and customers of color?

Back in January, The Fashion Law reported that Shamael Lataillade, a former Moschino employee, was suing the brand for various alleged racial profiling incidents at the retailer's West Hollywood Los Angeles location. According to the report, Lataillade originally filed a complaint on Dec. 4, 2018, claiming that the assistant manager of the store would use code words such as "Serena" to signal that a black customer had entered the premises, take photos of their license plates in the store parking lot, and refuse to pull items for them.

Soon after the allegations went public, Moschino’s parent company Aeffe issued a statement to Fashionista, stating: "It is our practice not to comment on pending legal matters. Moschino complies with applicable equal employment laws and values and respects all customers and clients regardless of their race or background."

Bustle also reached out to Aeffe for further comment, but did not receive a response by the time of publishing.

Then in February — which ironically also marks Black History Month in the U.S. — Gucci released an $850 black wool balaclava turtleneck sweater and Katy Perry's fashion line put out a pair slip-on loafers that were both accused of resembling blackface. The items have since been pulled.

"Gucci deeply apologizes for the offense caused by the wool balaclava jumper," Gucci shared in a statement released via Twitter on Feb. 6. "We consider diversity to be a fundamental value to be fully upheld, respected, and at the forefront of every decision we make." Perry shared a similar regretful sentiment in a statement, as reported by NBC News on Feb. 11, that also noted, "our intention was never to inflict any pain." Bustle reached out to both the Katy Perry collection and Gucci for comment on these specific scenarios, but also did not receive a response by the time of publishing.

"So often, brands and large companies who commit an immoral act simply release a statement of apology to the public and continue the same behavior behind closed doors," Liza Jones, a former luxury fashion public relations representative, tells Bustle. And seeing as how the overall industry, little by little, has began to prioritize diversity in recent years, especially when these same brands make a point to use black models for their campaigns, incidents of this type can make consumers wonder whether or not brands appearing to value diversity is genuine, or just performative, Shelby Ivey Christie, fashion historian and host of The Girl with the Bamboo Earring podcast, suggests.

"[I question if] the sudden race for luxury brands to be more 'inclusive' is more about following the business trend than it is about truly operating as an organization who values people, no matter their race or ethnicity," Christie tells Bustle.

The answer to Christie's inquiry could seriously affect the business of luxury retail. According to the Nielsen report, black consumers tend to be conscious shoppers, and are more likely to back brands that are "authentic, culturally relevant, socially conscious, and responsible."

So how can brands regain the trust of black consumers once damage is done? The answer is complicated, and in the age of "cancel culture," it may not always be easy. But Marquaysa Battle, a fashion and beauty journalist who has covered discrimination in the industry for nearly a decade, believes that there are constructive ways to confront these issues. She suggests that in order for brands to wholeheartedly embrace diversity and also be aware of racist imagery, fashion houses need to make room for more people of color to have a seat at the table. "Brands need to understand that treating customers right [in a store] isn’t where this should begin and end," she tells Bustle. "Where are the people of color in actual leadership roles on the retail and corporate side?"

Christie echoes that sentiment: "Leadership sets the standard for their teams," she says. "These ways of thinking are trickled down from the top. They aren't unique to the retail space, but are usually living and cultivated throughout the organization at varying degrees."

Furthermore, sometimes when companies in any industry do put people of color in leadership roles, these individuals can often become tokens to meet a diversity quota, as G.B. Saunders recently detailed for a piece published in Colorlines. These instances can leave a single employee with a huge weight on their shoulders, where they feel the need to speak up on behalf of their race, while white coworkers are seldom held accountable for their lack of cultural awareness.

While Moschino and Katy Perry's label haven't yet released how they plan to prevent these types of incidents moving forward, Gucci has proposed some positive changes. In mid-February, days after the blackface allegations regarding the balaclava sweater made headlines, CEO Marco Bizzarri flew from Italy to Harlem, New York City, to meet with fashion icon Dapper Dan — who had previously made amends and even collaborated with the fashion house after it was accused of stealing his designs in 2017 — according to an Instagram post shared by Dan on Feb. 10.

"The meeting is now over," Dan wrote in a follow-up post he shared on social media just five days later. "It's now time for Gucci to announce how they plan to make amends for what they did. We had some of the best minds from the corporate world participating, and experts in inclusivity and accountability — 90 percent people of color. They made great demands. It's time for Gucci to answer."

Gucci did just that. On Feb. 15, the iconic Italian fashion house announced its action plan "to further embed cultural diversity and awareness in the company," which includes:

Battle believes that these steps are a productive way for the company to move forward and for black customers to regain trust. She also adds that having Dan on board for the decision-making process was vital. "People of color deserve more than to be merely relegated to roles that oversee diversity, race, or inclusion in the company for PR purposes. We also make excellent designers, buyers, assistants, interns, CEOs, COOs, and marketers," she says, adding that with this plan, the brand is setting an important example for other luxury retailers to follow. "Now [Gucci] just needs to actually see these new initiatives through and keep the world updated on the process," she notes.

Only time will tell how these changes within Gucci bear out, and if black consumers — including celebrities like Swae Lee, T.I., and Soulja Boy who've all publicly denounced Gucci since the sweater incident took place earlier this month — will wear its designs again. But if the fashion house can commit to publicizing the progress of its proposal to keep diversity top of mind, much like it did with its initial announcement of the action plan via Instagram, this will allow consumers to not only maintain an open dialogue with Gucci, but also keep track of its efforts to make a real change in the years to come, a report from Forbes suggests.

But beyond just Gucci, Jones' hope is that these scenarios can send a clear message to the entire fashion industry at large that racial awareness is vital. "[Racial discrimination] is not a high-fashion retail specific issue — it’s a cultural issue," she says. "You can’t change the past, but you can make a better future."