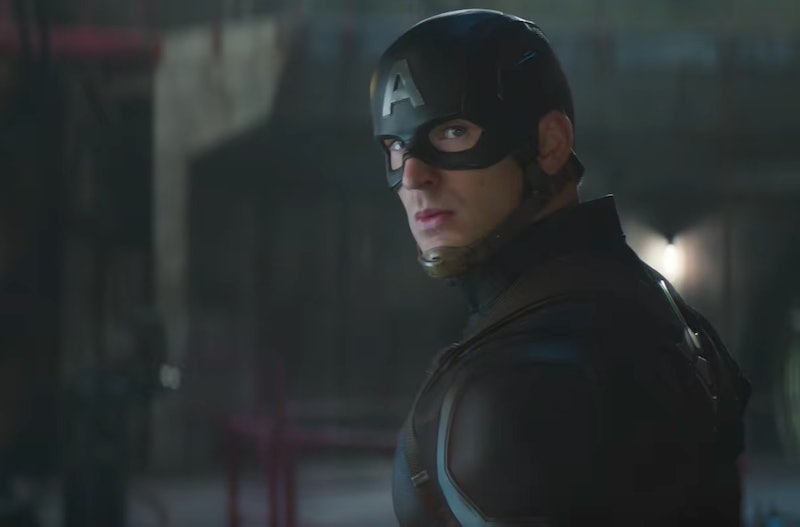 We need to talk about Cap. More specifically, we need to talk about Cap's new shield (and, no, that is not a euphemism). It's no secret that Captain America is in Spider-Man: Homecoming, but his appearances — all of which come in the form of educational videos — don't actually reveal much about Steve Rogers' post-Civil War life. However, one specific Marvel Easter Egg in Homecoming does. Towards the end of the film — spoiler alert — Tony mentions something about a prototype for "Cap's new shield." Yes, Tony is following in his father's footsteps and creating a new Captain America shield. What does this mean in the Marvel Cinematic Universe (MCU)? Well, it's not clear yet, but it definitely could mean a whole lot.

Before we get into the implications of Tony making Captain America a new shield, let's recap what happened to Cap's shield the last time we saw it. In Captain America: Civil War, after a big climactic fight with Iron Man, Cap left his shield behind, per Tony's request, and became a fugitive under the Sokovia Accords. Without his shield, which has been with him since the 1940s, Captain America has essentially left his old superhero identity behind. The ending of the film saw Tony make peace with Team Cap escaping his prison and going underground, but the relationship between Iron Man and Cap is definitely still tense, so the news that Tony is making Cap a new shield is pretty big. Does the new shield mean that Iron Man and Captain America have kissed and made up? It certainly looks like it.

But, if Iron Man and Cap have buried the hatchet, so to speak, and if Tony is making Cap a new shield, does that mean that he gave Steve back his old one? Is Captain America out there, stopping criminals using his trusty Vibranium shield on the DL? It's hard to believe Cap would ever stop fighting crime in some way or another, so I wouldn't be surprised if Tony did send Steve back his shield. Then there's also the question of how this new shield will differ from the original. After Team Cap and Team Iron Man fought in Civil War, Cap's shield was a little worse for wear thanks to scratch marks left by Black Panther. Maybe Tony is making Cap a stronger shield, one that will stand up better against foreign materials and bad guys, like, say, Infinity Stones and Thanos. In the same scene, Tony mentions working on a "magic belt" for Thor, which could imply that he is using alien technology fit for a god. Maybe Cap's shield will also get some kind of supernatural upgrade.

Whatever the prototype entails, we probably won't find out until the release of Avengers: Infinity War in 2018. But at least now we know that Tony and Cap are on the path to rebuilding their friendship.