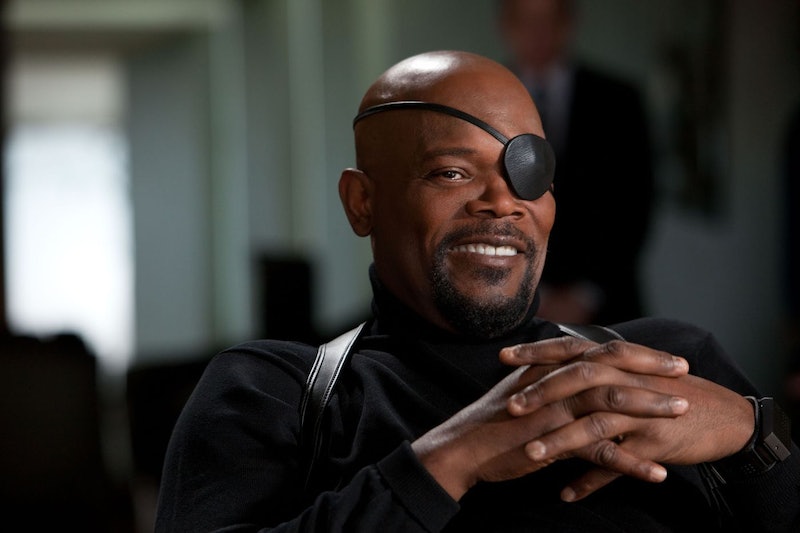 Spoilers ahead. There was a lot going on at the end of Avengers: Infinity War, but it's what happened at the very end, post-credits, that caught the eye of every fan. In the scene, a quickly-disappearing Nick Fury makes a desperate last-minute call on what looks like a modified beeper, and gets back a symbol familiar to fans as Captain Marvel's in response (though he wasn't really around to appreciate it at that point). But what's Captain Marvel's connection to Nick Fury, and why didn't he reach out earlier?

The standalone Captain Marvel is set to come out May 9, 2019 and is confirmed to be a '90s flashback that'll catch everyone up with the extremely super superhero. The movie will dive into the origin story of not only Captain Marvel, aka Carol Danvers (aka Ms. Marvel.... we'll explain in a minute), but also show Fury, S.H.I.E.L.D.'s top agent, pre-eyepatch at the start of his career.

In her official Marvel bio, it's said that Carol Danvers pursued her love of flying and aircraft by joining the Air Force right after high school, where she quickly rose to the rank of Major. Her intelligence, talent, and combat skills caught the eye of intelligence services, and she eventually ended up working for the C.I.A., where she met...wait for it... Colonel Nick Fury. The two had distinguished careers with the C.I.A. but parted ways after Danvers was captured by the KGB. She was eventually rescued by an order-defying Agent Logan (short, Canadian, maybe you know the guy), and chose to take a job with N.A.S.A., where she was tasked with capturing Mar-Vell, a Kree alien warrior sent by his superiors to keep tabs on Earth's space-travel progress.

During an attack by Kree enemies called the Skrull, Marvel and Danver were caught in an energy explosion that merged Danver's genetic structure with Marvel's. She was now a complete Kree-human hybrid, with all of Captain Marvel's powers and awareness. In the comics she chose to go by Ms. Marvel, though various iterations of Captain and Ms. Marvel have been the same person, or existed side by side.

Captain Marvel will be the first MCU female-lead film, and as mentioned, it will focus on Danvers' transformation and relationship with both Mar-Vell and Fury. Danvers is played by Bree Larson, and Jude Law has been in talks to play Mar-Vell, though Marvel hasn't confirmed anything. The film seems like it will skip the C.I.A./N.A.S.A. connection and sticks with the Air Force, where Danvers' DNA fuses with Mar-Vell's during an in-flight incident. A recent publicity photo on PopSugar shows Larson suited up at Nevada's Nellis Air Force base researching Danvers' character, seemingly confirming the Air Force angle.

So how does this tie into Infinity War, and why didn't Fury reach out to the powerful hero earlier? The idea there might be some bad blood between the two of them from the KGB capture taking place some time between Captain Marvel and Infinity War could be a possibility. More likely it's that Captain Marvel took on the responsibility of Protector Of The Universe; not exactly the sort of job you'd want to interrupt unless you had to. And with that job came a specific, possibly key, superpower. Among Captain Marvel's many abilities, including energy blasts, flight, and super-strength and endurance, is the rare gift of Cosmic Awareness. It allows Captain Marvel to become one with the intentions of the Universe, to see the fates and futures of individuals as they fit into the larger world, and may even allow her to manipulate reality itself.

That kind of awesome cosmic scale might be one thing that could help bring down Thanos and the Infinity Gauntlet, something Fury would be well aware of, but we won't see that happen until Avengers 4 hits theaters. For now, it looks like Captain Marvel is officially dealing with the Skrull, partly confirmed at a ComicCon panel where concept art for the classic enemies of the Kree was shared. Fury and Danvers will likely come together to bring down the would-be invaders with the help of Danvers' newfound powers, but until then we'll just have to marvel at the possibilities.