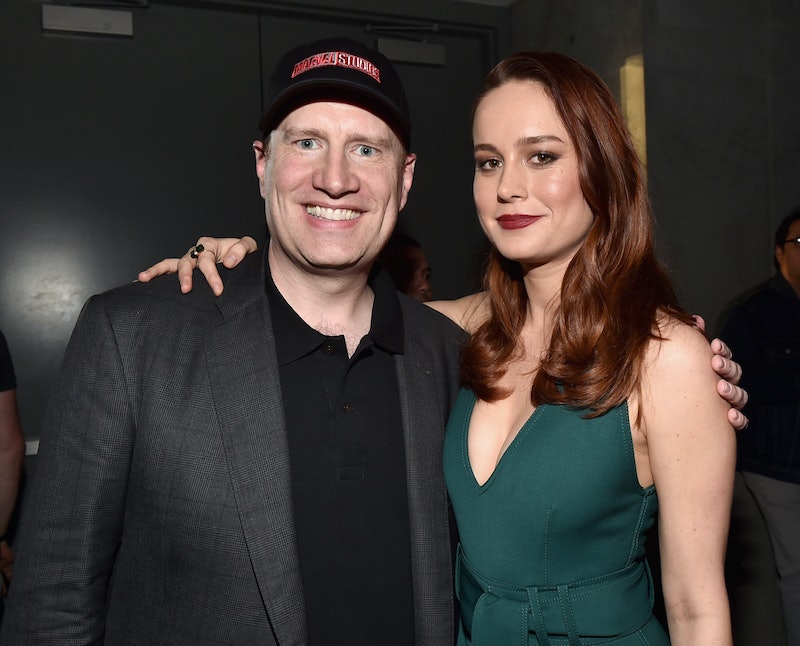 By the time the last credits rolled on the devastating Avengers: Infinity War and fans picked their jaws up off the floor, the one bright spot they could cling to was the knowledge that they'll soon be able to meet the all-powerful hero Captain Marvel. But what are Captain Marvel's powers, and will she actually be able to save the day? This post contains spoilers for Avengers: Infinity War. The end of Avengers: Infinity War was, without question, the most bleak of any Marvel movie; and possibly any superhero movie. After watching a number of heroes like Spider-Man, Black Panther, and Groot fade away into ash, the audience was then treated to a shot of a smiling Thanos watching the sunset on an alien planet as a smile crept across his face before the screen faded to black. It was incredibly somber, but as any Marvel fan should know, it wasn't really the end.

In the film's post-credits scene, S.H.I.E.L.D. agents Nick Fury and Maria Hill drive through New York and attempt, unsuccessfully, to locate Tony Stark. Then people start disappearing, including Hill and Fury himself. But before fading to ash, Fury manages to send a message on what looks like an old beeper that's been modified with alien technology, and once his message goes through, Captain Marvel's insignia is shown on the device's screen. So with Captain Marvel clearly playing a key role in the sequel to Infinity War, what can fans expect her to do?

The answer is actually a bit of a mystery, as the film version of the character seems like it's going to be a bit different from the comic book version. In 2016, Marvel Studios head Kevin Feige told Vulture's Kyle Buchanan that Captain Marvel was going to be the most powerful hero in the MCU by far. "With Captain Marvel, she is as powerful a character as we’ve ever put in a movie. Her powers are off the charts, and when she’s introduced, she will be by far the strongest character we’ve ever had," Feige said. That's a pretty big statement considering the films feature Thor and Hulk, generally considered the two most powerful Avengers in the comics, but the Captain Marvel of the comics isn't exactly a slouch, either.

A number of characters have gone by the name Captain Marvel over the years, but the latest — and the version that's showing up on film — is Carol Danvers. Danvers had previously gone by the superhero names Ms. Marvel, Binary, and Warbird before settling into her current title, which she inherited from the original Captain Marvel, the alien Mar-vell, following his death. Mar-vell was a superpowered member of the Kree alien race, and Danvers — a fighter pilot — received her abilities after Mar-vell shielded her from the explosion of a Kree weapon, causing his alien DNA to merge with hers. The result was one of the most powerful Avengers.

Danvers' powers are numerous, and more closely resemble those of Superman than any member of the MCU. She is super strong and physically durable, making her extremely formidable in a fight. She's also resistant to poisons and diseases, and can survive in outer space without aid. She can fly, sometimes at the speed of light, and can also fire photonic energy blasts from her hands (let's see Superman do that). She is also capable of absorbing and redirecting energy, meaning that any energy blast or electrical attack against her would only make her stronger. She has been shown to possess a "seventh sense" (what her sixth sense is is anyone's guess) that allows her to sense danger; kind of like Spidey's "spider sense." But there's another more powerful version of Danvers from before she went by the name Captain Marvel that the film version may more closely resemble.

Back when she was known as Binary, Danvers was capable of drawing energy from a white hole, which gave her power over heat, gravity, and electromagnetic energy. In this form, she could transform into a being of near-pure stellar energy, making her close to invincible. So with Captain Marvel set to be the most powerful hero in the MCU by far, there's a good chance the character will closely resemble the Binary version of Carol Danvers from the comics, since that was her most powerful incarnation.

With her incredible strength, lightning fast speed, and energy absorption/projection abilities, Captain Marvel is going to bring a helluva lot of firepower to the Avengers when she shows up in Avengers 4. Now let's just hope it's enough to defeat Thanos and set things right.