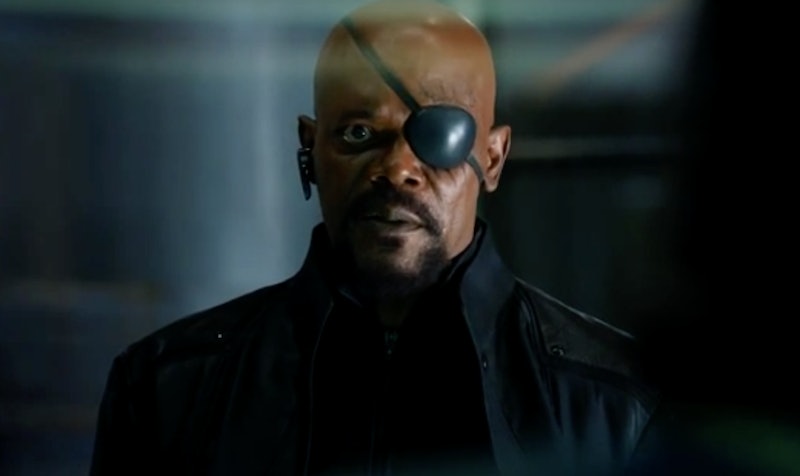 After a decade, fans have seen almost every Marvel Cinematic Universe origin story with the exception of this one crucial character's. But new information promises that the upcoming Captain Marvel will show Nick Fury's origin story and it'll explain so much about him and the Marvel universe. Watching a young Nick Fury evolve into the powerful man audiences know will not only shed light on his relationship with Captain Marvel, but perhaps that daunting post-credits scene of Avengers: Infinity War.

Before Nick (Samuel L. Jackson) was donning an infamous eyepatch and assembling Avengers, he was "a lowly desk jockey with S.H.I.E.L.D." who had yet to experience any extraterrestrial threats, according to Entertainment Weekly. This is how audiences will meet him in Captain Marvel. Meeting Carol Danvers (Brie Larson), it seems, will change everything, as their lives immediately became intertwined and the onset of Nick's initiative begins.

The two first meet in the '90s when the film takes place. As Jackson told EW, it's Nick's first encounter with Carol, who's part-human, part-Kree, that makes him realize there are people with exceptional powers who could be used for good. Thus, he experiences an awakening:

“This is a mind-changing, attitude-changing moment for him that leads him to become the person that we know. He [now] understands that there are these other things out there. He understands that they’re not all enemies, and we do need to find allies who have specific kinds of skills that humans don’t have. And trying to convince people above him is a difficult task because they haven’t seen it or experienced it.”

Nick, of course, was infamously established as the mysterious, end-of-credits authoritative figure in the MCU's first film, 2008's Iron Man. But he'd obviously come a long way at that point, fans just didn't know why or how. In the first photos from Captain Marvel, obtained by EW, a young Nick Fury is revealed. In a suit and jacket, sans eyepatch, looking young and eager, he has a scratch above his left eyebrow that's patched up. (Jackson has been digitized to look younger in the film.) When the photos were revealed, Jackson reacted to young Nick on social media, posting the photo and writing, "Wow, this Marvel de-aging thing is doper than I thought!#twoeyedfury#captainmarvelmovie."

Learning about Captain Marvel's capabilities, Nick's journey, and their relationship, may also open up explanations as to why Nick sent a message to Carol as he was disintegrating in the post-credits scene of Infinity War. Further, Marvel Studios President Kevin Feige explained to EW that Captain Marvel is MCU's most powerful character yet. "There’s a reason Nick hit that button at the end [of Infinity War]," he said. "He realized that they were up against something far bigger than they had ever been up against before." So whatever these two get up to in Captain Marvel, it's impressive enough to make Nick Fury think that she's the one to call when the world is coming to an end.

But will Nick Fury get his own origin story movie? It may be unlikely at this point. According to Movie Web, Marvel announced its plan to make less origin movies in 2014 after fan feedback suggested there was fatigue around them. "I think it's case by case," Feige said in June. "The bigger philosophy is, with each film we make, how can we do it in a way we haven't done before?" But as Marvel fans know: never say never.