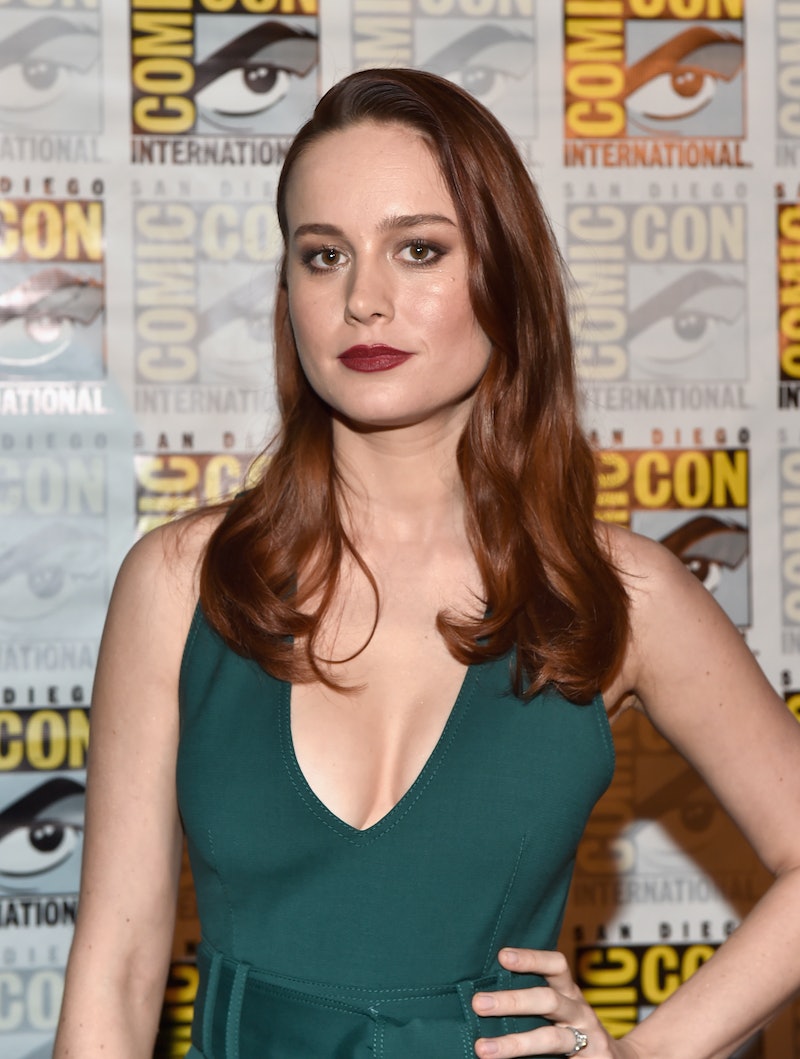 Spoiler alert for Avengers: Infinity War. Captain Marvel is coming. The post-credits scene in Avengers: Infinity War showed Nick Fury, the former head of S.H.I.E.L.D., sending a last minute S.O.S. call to the Marvel Cinematic Universe's newest superhero, hinting that Captain Marvel will have a major role in next year's Avengers 4. Thus far, the only thing fans know about her is that she can be reached by beeper, so let's take a look at Captain Marvel's comics history to help clear a few things up before her solo film is released in March of 2018.

The name Captain Marvel has been used by a few superheroes over the years, both DC and Marvel alike. (DC's Captain Marvel is now known as Shazam, and is not part of the MCU.) Within the Marvel comics canon, Captain Marvel has only been two people: Mar-Vell (aka Dr. Walter Lawson), a Kree spy alien sent to Earth to spy on humans only to change sides, and Carol Danvers, a Major in the Air Force turned C.I.A. agent. Fans will see both in MCU's Captain Marvel, with Brie Larson set to play Carol Danvers and Jude Law playing Mar-Vell.

The Original Captain Mar-Vell Vs. Thanos

Mar-Vell made his first appearance on the page in "Marvel Super-Heroes #12," released in 1967. A Kree alien, Mar-Vell spent time on Earth under the alias Dr. Walter Lawson and fought crime under the name Captain Marvel (now commonly recognized as Captain Mar-Vell). As an alien, Mar-Vell was sent to Earth as a spy, but ended up switching sides and bonding with humans.

According to his official Marvel biography, Captain Mar-Vell went on to have many cosmic adventures, acting at one point as the Protector of the Universe. It was in this newfound role that Captain Mar-Vell played a crucial role in helping the Avengers defeat Thanos in the comics. As detailed by the site, Mar-Vell was able to use the Cosmic Cube (the Tesseract in the MCU) to change reality and bring it back in time before Thanos took over. Throughout his superhero career, Mar-Vell worked with the Avengers, other Cosmic superheroes, and the Defenders on Earth.

Carol made her comics debut in 1967's "Marvel Super-Heroes #13," as an Air Force Officer. Far from a superhero, Carol was first introduced mainly as a love interest for Captain Mar-Vell, and, as reported by Vox, later would have an ongoing romantic storyline with the Kree alien. It wasn't until Captain Mar-Vell solo comics were cancelled in 1970 that Carol got to break out from the love interest role and become Ms. Marvel. Carol's new superhero identity, gained when her DNA was fused with Mar-Vell's, debuted in 1977. This time, Carol wasn't an Air Force Officer, but a journalist, who had superhuman strength and the ability to fly. As detailed by Vox, her character was later raped by a cosmic villain, forcefully impregnated, and then left Earth to follow her rapist into the Cosmos and have his baby. (The early '80s, it seems, was a controversial time in Marvel history to say the least.) After that disastrous run, Carol Danvers returned to the comics, this time with a new writer, and became Binary, enhanced now with cosmic superpowers.

It wasn't until 2012's "Avenging Spider-Man #9" that Carol Danvers actually became Captain Marvel, according to IGN. Currently, as stated on the Marvel website, Captain Marvel's abilities include the power to fly, super strength, and the power to shoot energy beams from her hands. Just as her superhero identity has evolved, Carol Danvers' backstory has also changed. This new Carol Danvers was not only a Major in the Air Force, but a C.I.A. agent, who met Nick Fury while working for the government. Similarly to Ms. Marvel, this version of Captain Marvel also got her powers from an explosion that melded Mar-Vell's DNA to hers. It is this last Captain Marvel that will, presumably, be leading Captain Marvel and joining the Avengers in Avengers 4.

Captain Marvel's comics history is a complicated one, but the Captain Marvel we have now was definitely worth the wait.