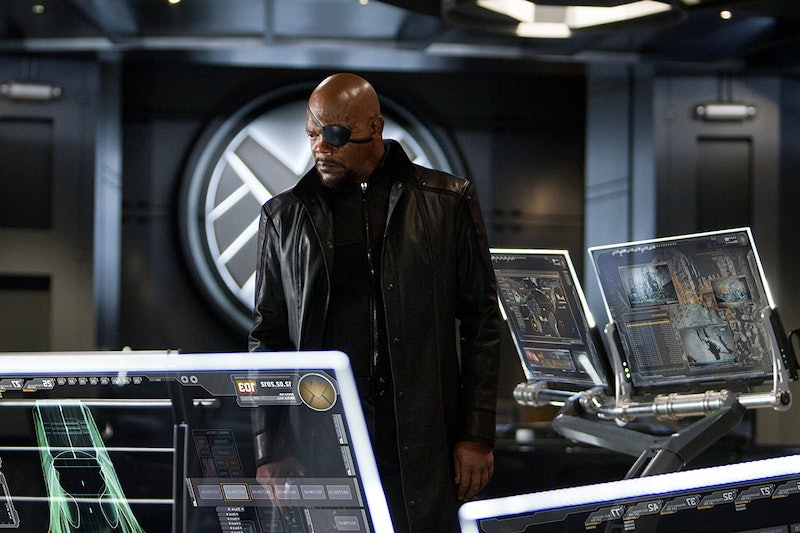 One of the most surprising moments in Avengers: Infinity War was the film's post-credits scene. Not because it showed the carnage caused by Thanos on a larger and more everyday scale, nor because it teased next year's Captain Marvel. But rather because it featured the return of Nick Fury, a character who's been a member of the MCU since the beginning but hasn't been seen on screen since 2015's Avengers: Age of Ultron. Seeing him again was certainly a welcome sight, but it also brought back some longstanding questions about the character, like how did Nick Fury lose his eye?

That bit of info has actually never been revealed in the MCU, not in any of Samuel L. Jackson's eight film appearances as Fury. The closest fans ever came was probably in 2014's Captain America: The Winter Soldier, when Fury lifted his eye patch to reveal a cloudy, scarred-over eyeball. He also mentions in that film that the last time he trusted someone, he lost an eye. But while his two-eyed past has thus far remained elusive, fans will likely get an answer next year. That's because Fury will appear in Captain Marvel, a film that takes place in the 1990s — in other words, long before Fury's first appearance in the post-credits scene of 2008's Iron Man. And he is confirmed to have both of his eyes in the film.

"We’re going back now, and I meet Captain Marvel in more of an origin story," Jackson revealed in an interview with A.V. Club's Katie Rife. "You’ll see Nick Fury with another guy’s face, somebody that’s got two eyes, so that’s a whole big deal. You’ll see. It’s prior to the eye injury, no eye patch."

So the film takes place before Fury's eye injury, but the purpose of doing so seems moot unless they're actually going to show how he ends up with the eye patch at some point. Although Captain Marvel is ostensibly an origin story for its titular character, one can reasonably presume it to be an origin story for Fury as well, and it would therefore make sense for the film to show how he obtained his most distinguishing feature. One thing is almost for certain, though: However Fury loses his eye in the MCU, it will be different than the way it went down in the pages of Marvel Comics.

The comic book version of Fury is considerably different than his on screen counterpart. That Nick Fury began his career not as a superhero, but as a soldier. Sgt. Fury and His Howling Commandos was a war comic first published in 1963. The stories take place during World War II and depict Fury as the young, two-eyed commander of an elite unit of American G.I.s. It was in a battle during his time with the Commandos that Fury took shrapnel to the eye as the result of a grenade blast, which caused him to lose sight in the eye and eventually led to his now iconic eye patch.

The character was brought into the present day Marvel Universe in 1965 in Nick Fury: Agent of S.H.I.E.L.D., which first ran in the series Strange Tales before spinning off as its own title in 1968. This incarnation of Fury was more mature — and eye patch-wearing — than his WWII counterpart, and was a superspy for the organization S.H.I.E.L.D. This reworking of the character was done to capitalize on the spy fiction craze of the time, led by the likes of James Bond and The Man from U.N.C.L.E., according to an interview with Stan Lee by IGN's Eric Goldman.

Given that the Nick Fury of the MCU is not old enough to have fought in World War II, and considering the fact that he had both eyes as recently as the 1990s, it seems clear that the movie version of the character will receive his own original eye patch origin — and odds are fans will get the chance to see it firsthand in Captain Marvel.

More like this
The 50 Most Powerful Characters In The Marvel Universe, Ranked
By Johnny Brayson and Nola Pfau
A New Scooby-Doo Movie Confirmed Velma Is Gay & Twitter Is Pumped
By Radhika Menon
Everything You Need To Know About ‘Black Panther: Wakanda Forever’
By Bustle Editors
Alan Rickman's Diary Reveals Why He Considered Leaving 'Harry Potter'
By Darshita Goyal
Get Even More From Bustle — Sign Up For The Newsletter