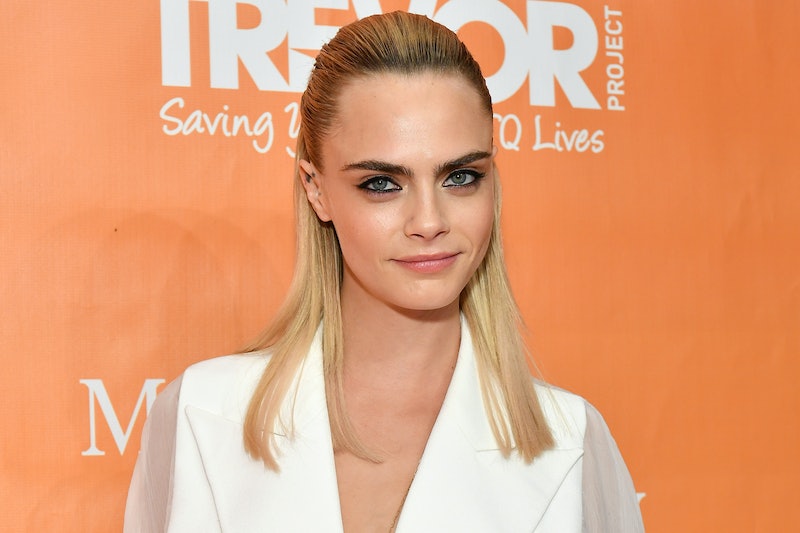 Dating your co-worker can be a tricky situation to navigate for the average person. It happens all the time in Hollywood, though, perhaps due, in part, to all the "getting to know you" down-time in between scenes on movie sets. For example, Cara Delevingne and Ashley Benson's relationship started while the pair filmed Her Smell together in the spring of 2018, Delevingne recently revealed to Marie Claire. And while it doesn't sound like either of them were actively seeking out romance at the time, it just kind of happened anyway — and these days, they seem like they're more in love than ever.

Both Delevingne and Benson have been pretty tight-lipped about their relationship from the get-go. It's been a little more than a year since they were first spotted holding hands out in public, but they only recently, officially confirmed that they were dating.

The topic of Delevingne's "girlfriend" came up casually a few times over the course of her interview with Marie Claire, but for the most part, it was only in passing. She did, however, open up a little bit about how they ended up becoming a couple.

"We weren’t looking for it," she told the outlet. "It was really just very authentic and natural." So, maybe love *does* find you when you least expect it — well, in their case, at least.

Delevingne and Benson came out with their relationship during Pride Month earlier this year. On June 14, Delevingne posted a video to Instagram of her and Benson sharing a kiss, and simply captioned it "#PRIDE," followed by a series of rainbows, hearts, and heart-eye emojis.

When asked at the TrevorLIVE Gala a few days later why she finally decided to confirm that they were dating, Delevingne told E! News, "I don't know because it is Pride, it's been 50 years since Stonewall happened and I don't know. It's been just about our one year anniversary so, why not?"

Delevingne has been pretty open about her sexuality in the years since she shot to fame. It wasn't always easy for her to do that, though, she admitted to Marie Claire, and said that she tried to deny her attraction to women for a really long time. "[I] didn’t want to feel different," the star said of being queer, "even though from an early age I always felt I didn’t belong."

She definitely belongs in the spotlight now — no doubt about that. Delevingne basically achieved super model status following her Burberry debut back in 2011, but she's gone on to have a successful career as an actor as well. In addition to starring with Benson in Her Smell earlier this year, the Brit has appeared in Paper Crowns, Suicide Squad, and will play Vignette Stonemoss — "a spunky fairy who rails against the emerging caste system," as Marie Claire described her character — in the upcoming Amazon series Carnival Row with Orlando Bloom.

Much like her relationship with Benson, it seems like her success in acting has developed pretty naturally, too. Lucky in love and in her career — it doesn't get much better than that.