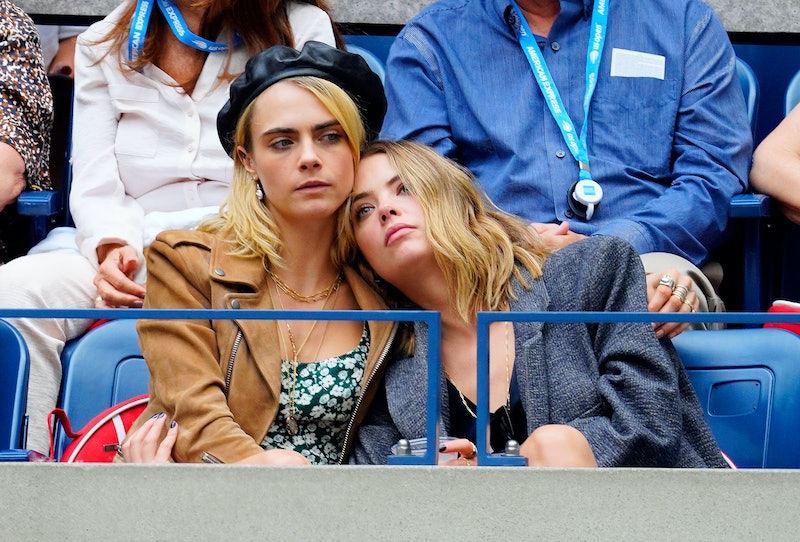 Cara Delevingne and Ashley Benson may have called it quits, but the supermodel is still protective of her ex. In a post shared on her Instagram Story on Thursday, May 14, Cara Delevingne defended Ashley Benson in the wake of their breakup, asking her fans not to send the Pretty Little Liars actor any hate online. While Delevingne didn't share any specifics about the situation, the comments appear to be tied to the fact that Benson was recently spotted with rapper G-Eazy in Los Angeles.

"It's more important now than ever to spread love, not hate," Delevingne wrote on her Instagram Story. "To everyone hating on @ashleybenson please stop. You don't know the truth, only her and I do and that's exactly how it should be." Benson responded by sharing Delevingne's message on her own Story, adding a heart emoji.

Despite reports that Benson and G-Eazy are a new couple — and some paparazzi shots of them kissing while running errands on May 14 — the actor seemed to subtly confirm that the pair are just friends with the help of a fan Instagram account. "Can't Ashley have friends now? STOP SAYING ASHLEY CHEATED! OR EVEN CARA! They just need friends right now more than ever," a fan wrote on Instagram, alongside screenshots of an article from The Cut about Benson and the rapper. In response, Benson liked the post, which some have taken as a confirmation that things are strictly platonic between her an G-Eazy. After all, the pair have been friends for some time. They recently collaborated on a cover of Radiohead's "Creep," which was released before news of Delevingne and Benson's split was reported.

Delevingne and Benson met in 2018, on the set of the indie film Her Smell, where they played members of an all-female rock band. In August of that year, the two were spotted kissing outside of Heathrow Airport in London, but Delevingne didn't publicly confirm the relationship until June 2019, when she shared a photo of herself and Benson kissing, in honor of Pride Month. "It's been 50 years since Stonewall happened and ... it's been just about our one year anniversary so, why not?" Delevingne told E! News about making the relationship public.

At the 2019 TrevorLIVE Gala — where Delevingne was being honored with the Trevor Project's Hero Award — the model spoke about Benson during her moving speech. "[Ashley]'s one of the people who help me love myself when I needed it most and I really needed it," Delevingne said. "She showed me what real love is and how to accept it, which is a lot harder than I thought."

Despite sharing more and more of their relationship on Instagram, Delevingne told Elle UK in September 2019 that her romance with Benson was "sacred" and something that she wanted to protect. "If it is something that is so good, you don’t ever want anyone to ever change it, even though people shouldn’t have that power," she explained. However, after keeping it out of the spotlight for about a year, Delevingne ultimately decided that she wanted to be "proud" of her girlfriend and their romance.

"I’ve never been in a relationship where things are so public, or where I posted pictures of someone else," Delevingne told the outlet. "This seemed different. We had gotten to the point where we had kept it a secret, or at least not wanted attention, and now I feel like I’m not going to not be proud." And despite splitting, it seems Delevingne is still proud of their relationship — and of Benson herself.

More like this
Lizzo & Myke Wright's Relationship Hit A New Level With Their "Hard Launch"
By Stephanie Topacio Long
Bennifer's Relationship Timeline Now Includes A Grammy Date Night
By Jake Viswanath
Vanessa Hudgens Is Reportedly Engaged To Cole Tucker
By Jake Viswanath
Pamela Anderson’s Dating & Marriage History Could Be Its Own TV Series
By Jake Viswanath
Get Even More From Bustle — Sign Up For The Newsletter
From hair trends to relationship advice, our daily newsletter has everything you need to sound like a person who’s on TikTok, even if you aren’t.