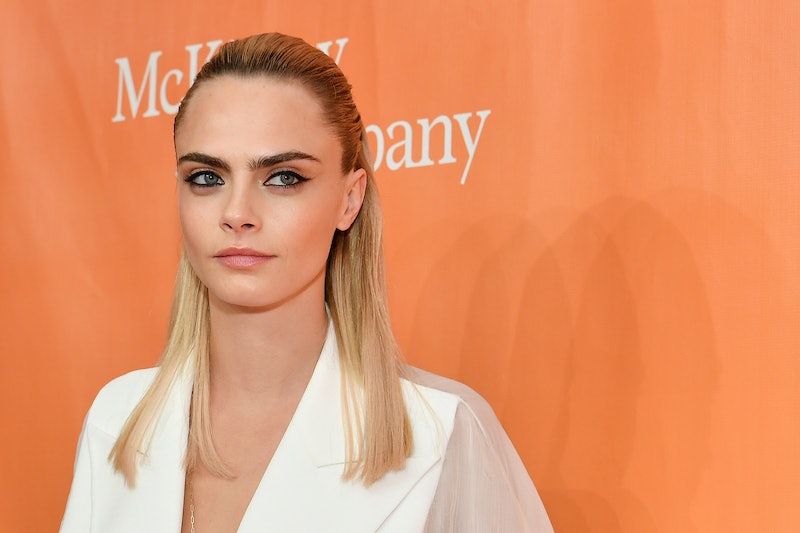 It's been a little more than a year since they first started dating, but they'd mostly keeping things on the down-low up until this summer. As it turns out, though, there's a really good reason for that. Cara Delevingne's relationship with Ashley Benson is something she really wants to protect, the Carnival Row star explained to Elle UK. which — when you think about the hyper-public jobs they both have — definitely makes a lot of sense.

Delevingne's interview for Elle UK was conducted by her long-time friend, Derek Blasberg. The fact that they've known each other for several years probably made it a lot easier for her to open up about her relationship with Benson — a topic that they've both been notably tight-lipped about in the past.

Delevingne and Blasberg covered a good deal of ground during their conversation, including her formerly wild-child ways. Now that Delevingne is older, though, she says it's too hard "to be wild and work" at the same time. Of course, her blossoming romantic life has helped curb those rebellious urges as well.

After Blasberg pointed out that Delevingne said she was in love during her acceptance speech for the Hero Award at the TrevorLIVE Gala back in June, he asked the star what love feels like for her, specifically. "I’m just better when I’m in love," she confessed. "That doesn’t have to mean with someone. It can also mean with myself. It just feels incredible when you’re not alone, when you’re facing the world with someone else."

He then pressed Delevingne for a little more info, and luckily, she obliged. "Why have you been hesitant to talk about your love life in the press?" Blasberg implored, to which she replied, "Because it’s sacred."

Delevingne went on to explain,

"I get why people care so much, and I don’t want to be so secretive that people think I’m ashamed of anything. But I’ve never been in a relationship where things are so public, or where I posted pictures of someone else. This seemed different. We had gotten to the point where we had kept it a secret, or at least not wanted attention, and now I feel like I’m not going to not be proud."

She also admitted that she was concerned about people making assumptions about her relationship with Benson in the beginning, which likely made her more inclined to stay tight-lipped about it. "Because if it is something that is so good, you don’t ever want anyone to ever change it," she explained, "even though people shouldn’t have that power."

Totally understandable, right? It seems like Delevingne is basically saying that they got really comfortable keeping their love just between the two of them — well, as much as they possibly could, at least — and they were super happy maintaining things that way. So, why risk allowing the public and potentially changing the relationship's dynamic, you know?

It's always fun to get a glimpse into the private lives of your favorite celebrities, but at the end of the day, they definitely don't owe fans anything in that regard. Fingers crossed that Delevingne and Benson will continue to let us in. If they don't, though, that's OK, too — as long as they both just stay happy.