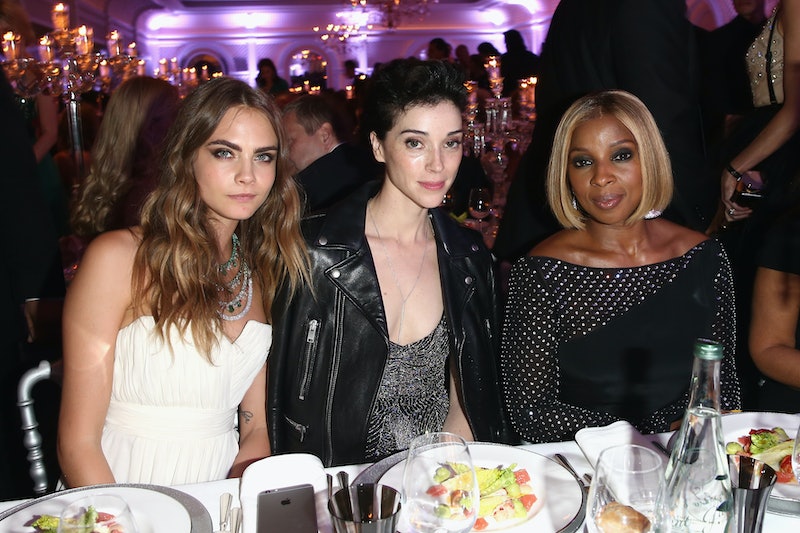 As another year comes to a close, it's only right that we reflect on the good, the bad, and the truly heartbreaking. Because I'm feeling both melancholy and sentimental, let's take a trip down Celebrity Breakup Lane, shall we? Without question the most devastating 2016 breakup was Cara Delevingne and St. Vincent's, which happened in late summer. The pair had only been together a little over a year, but their relationship was, at least in the public eye, pretty affectionate.

There was something carefree and fun about Delevingne and St. Vincent that really spoke to the zeitgeist. They were both the definition of "cool," presented as endlessly at ease around one another, and their love felt accessible. Not in a way that made the public rapacious, mind you, but one that left you with a good feeling; it felt natural to look at them in a photo and say, "Now that's a damn fine celebrity couple."

In August, Delevingne discussed her feelings for St. Vincent in an Entertainment Tonight interview with such purity and tenderness that knowing they're no longer together stings even more:

"I'm completely in love. Before, I didn't know what love was — real love. I didn't understand the depth of it. I always used to think it was you against the world. Now I know the meaning of life is love. Whether that's for yourself or for the world or your partner."

What's more: They were enigmas to the public. They were captured by paparazzi cameras or appeared in one another's Instagrams and tweets, but they were not media-hungry by any stretch — an interesting and admirable quality for a celebrity couple. They weren't vying for attention on the tabloid covers, nor were they popping up to the point of public fatigue. It's tough to be that cool and that mysterious, but Delevingne and St. Vincent did it.

Perhaps the most pressing reason their breakup was devastating was because their relationship was a queer one. They were not solely liked because they were two women in love, but rather all of the positive elements of their relationship — gushing about one another, staying enigmatic, appearing to rejoice in one another's company on social media, and so forth — came together to paint a portrait of a happy celebrity couple who just so happened to be queer.

Delevingne is reportedly still single, with her Instagram posts from Burning Man and the one shown above seemingly acting as an unofficial statement on her breakup feelings. St. Vincent was dating Kristen Stewart shortly after the split, but there are no reports on whether they are still together. There were also alleged reports of cheating, but there's no need to ponder who hurt who; what good does that do? Instead, let's salute one of the most surprising and low-key devastating celebrity breakups in 2016, Delevingne and St. Vincent.