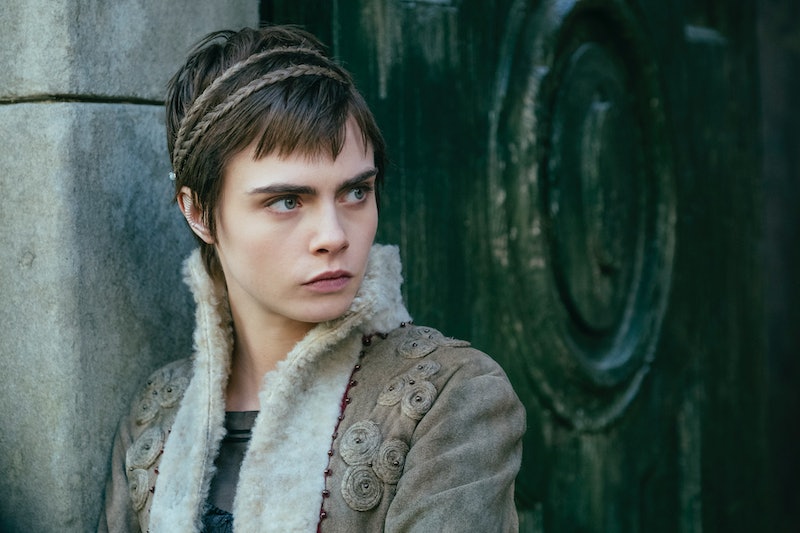 Though living in a world set hundreds of years in the past, Cara Delevingne's Carnival Row character, Vignette Stonemoss, has a sadly timely story. She's one in a growing pack of mythical creatures who've fled their war-torn homeland and resettled in the Burgue, a Victorian-era city predominantly run by humans. As a faery, Vignette is an immigrant in a hostile, unwelcoming setting. So while the show is technically a fantasy, it's also explicitly political.

"It's really talking about immigration and refugees and classism and sexism, racism and elitism," Delevingne told Variety of the series. As she and her co-star Orlando Bloom explained to Vanity Fair, using the lens of fantasy allows them to explore those themes without hitting people over the head with an agenda. "People can look at it and be objective, rather than feel like they have to take sides," Bloom told the outlet. Delevingne agreed: "People want to be taken out of the real world a little bit even if it's not escapism. No one wants to watch a TV show about what the state of feminism is really like, so they can watch The Handmaid's Tale [instead]."

Upon arriving in Carnival Row's Burgue, Vignette is dealt hardship after hardship. She's the only survivor after the ship of refugees she was on crashes at sea, and she's brought on as a handmaid for the wealthy Spurnrose family in order to pay her debt for the voyage. Her employer, Imogen, is vocally intolerant, and forces Vignette to wear a corset that binds and hides her wings. There are also a series of faery murders happening throughout the city — which are being investigated by none other than Rycroft Philosrate (Bloom), Vignette's ex-lover who she'd grieved for seven years thinking he'd died in the war.

Another aspect that might be surprising, considering the show's period setting? Vignette is pansexual. "All faeries generally are," Delevingne explained to Variety, suggesting there will be multiple queer characters in Carnival Row. "[Faeries] don't see gender. It's all about who they are and their hearts. A lot of the things that weren't written in the script, we made them so. Obviously, I didn't say, 'I want to be a pansexual faerie,' but it made sense that all faeries kind of just love who they love."

Considering how unaccepting the Burgue seems to be, though, Vignette's pansexuality could further complicate things as she navigates her new world. Still, Delevingne couldn't be happier to be the one who gets to bring the character to life. "I'm constantly challenged as an actor, but this role is something I fell in love with so fast," she told The Hollywood Reporter. "[Vignette is] tantalizing, mouthwatering and honest ... there was just no reason not to do it."

Delevingne hasn't teased much about how Vignette's story will play out, but hopefully, there will be at least some light amid Carnival Row's grim reality. Vignette is no Tinkerbell, and it'll take a lot more than clapping to keep her alive.