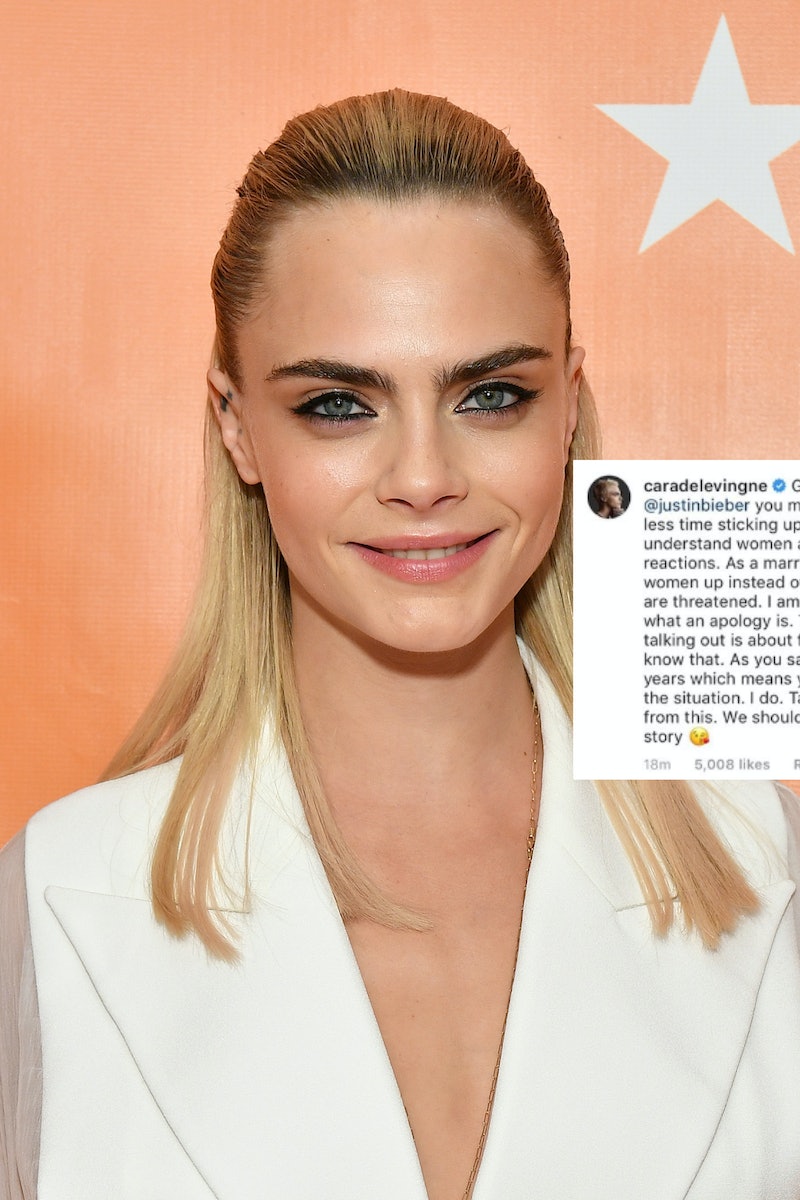 Taylor Swift is taking a stand against her former record label and its new owner, and her friends are showing that they totally support her. In fact, Cara Delevingne defended Swift against Justin Bieber after he made an Instagram post as a rebuttal about her claims. Delevingne emphasized that Swift should be allowed to feel however she wants about the business deal, regardless of anyone else's opinion.

It didn't take long for Delevingne to open up about her thoughts in a comment on Bieber's post, even referencing the comment his wife, Hailey Baldwin, left calling him a "gentleman." It seems that Bieber has now deleted Delevingne's comment from his post, according to multiple fan tweets, but she took the opportunity to share it again on her Instagram Story, adding, "Love you @taylorswift."

"Gentleman? @haileybieber @justinbieber you must be bored. I wish you spent less time sticking up for men and more time trying to understand women and respecting their valid reactions. As a married man, you should be lifting women up instead of tearing them down because you are threatened. I am not sure you actually understand what an apology is. This issue that @taylorswift is talking about is about far more than a picture and you know that. As you said, you haven't spoken to her in years which means you definitely don't understand the situation. I do. Take a step back and try and learn from this. We should all be on the same team. End of story."

Since Delevingne's reply was deleted, fans apparently took it upon themselves to make sure Bieber got the message by copy/pasting her statement in the comments section.

Delevingne's post makes a really good point — Swift is obviously upset that her masters are now in the hands of someone she doesn't trust, and her feelings are valid. In Bieber's post, he wrote that he and Braun love her and "truly want the best" for her, but it's clear that Swift disagrees. It makes sense that Bieber would want to defend his longtime manager, but as Delevingne pointed out, it doesn't seem that he's really willing to touch on the real issue at hand, which is that Swift claims she wasn't given an opportunity to buy her masters back. (Bustle previously reached out to reps for Swift and Braun for comment on the situation, but did not receive an immediate response. Borchetta has released his own statement on the matter.)

Delevingne is just one of the celebrities who have come forward to defend Swift. Halsey also shared her support, praising Swift's songwriting, and Todrick Hall, who was part of her video for "You Need To Calm Down," posted a series of tweets explaining his own experiences working with Braun on Twitter to back up Swift's claims.

At this point, the situation involving Swift, Braun, and Borchetta seems to be getting more and more complicated. But no matter how this ends up playing out, it's safe to say that the singer's friends will have her back.