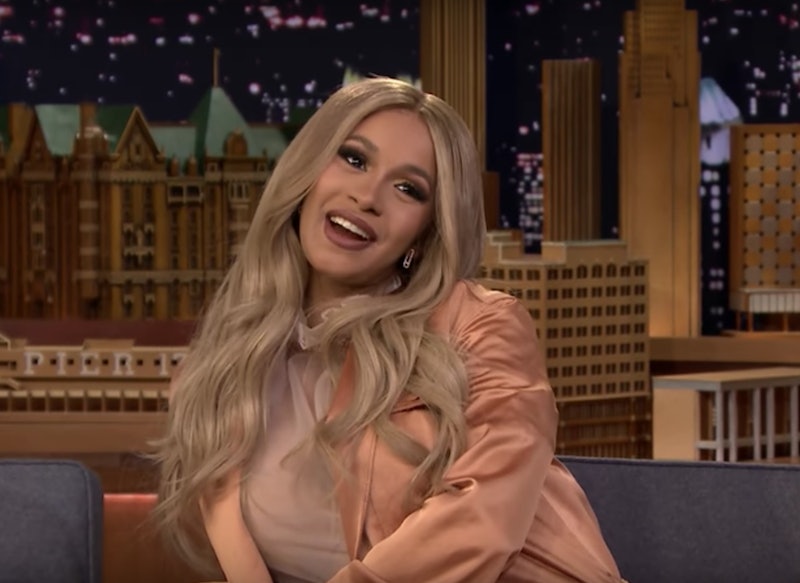 You wanna party with Cardi? Then you should probably learn how to use her signature catchphrases first. On April 9, Cardi B co-hosted The Tonight Show Starring Jimmy Fallon. During one segment, Fallon asked the rapper to put her now-notorious catchphrases into context — and she basically equated them all to some very specific animal emotions.

It's hard to imagine that, at this point, there are still people on this Earth who haven't heard of Cardi B. The Bronx-born rapper is unavoidable in the best possible way — seriously, she's a delight —  but Fallon still thought it wise to make sure his audience was fluent in Bardi-language.

"For people at home that are getting to know you," Fallon started, "I know you have this, you have very awesome ways of expressing yourself through different sound effects.

The first sound Cardi was tasked with translating: "Eeeeooowwww!" Fallon tried to sound it out phonetically, which came out pretty flat. The true gift of the phrase lies in the tone, which Cardi compared to "a sad cat."

"You know, that's almost like a sad cat sound," she earnestly explained. "Like a cat that's going through pain," she said before giving it the much-needed color it deserves.

Cardi demonstrated twice — really dragging out the sad cat-ness — and Fallon followed suit. "It's almost like a plane landing," the host said. Yeah, that makes sense, too — but Cardi's "sad cat" translation is pretty much perfect.

"In what situation would you be in for that to come out?" Fallon asked. "Oh, you know, like, when they tell you good news," Cardi started, "but it's good, but it's not exciting? It's like, 'Oh, I have a new job, eeeeooowwww!'" Could she have picked a more relatable scenario? The woman is a gift.

On the other hand, if you get some good news that's actually exciting — like, for example, if you're telling someone that you're co-hosting The Tonight Show Starring Jimmy Fallon — there's an alternate, higher-pitched pronunciation of "eeeeooowww," which requires more of a growl, or a "push," according to the rapper. One may also choose to stick their tongue out at the end for added enthusiasm, as Cardi has often been known to do.

The third and final catchphrase Cardi was asked to explain was, "okuuuuuuurt!" Now, it should be noted that this sound did not originate with Cardi. Nor, however, did it come from Khloé Kardashian — as some fans of Keeping Up With the Kardashians may assume — since Khloé, and other members of the Kardashian-Jenner family, use it pretty frequently on the show.

Now that that's settled, let's get back to Cardi and how she uses "okuuuuuuurt!" When asked by Fallon how to pronounce the sound, Cardi explained, "You know, it's like a cold pigeon in New York City." Yep, that checks out. The sound requires a kind of coo-ing tongue-roll, and nobody does it better than Cardi.

In terms of the tone, it can be varied. "It depends on the situation that you're in," Cardi told Fallon. "You know what I'm saying? Like, if somebody checks somebody, it's like, 'okuuuuuuurt!'" But like a shortened, sharp version — like, per Cardi, "I didn't know she had all of that in her!" Just watch the video. You'll see what she means.

Cardi's co-hosting gig on Fallon was completely captivating, and definitely worth a watch. And after you're done, keep working on your Bardi-language. Eeeeooowww!

Correction: A previous version of this story misstated the full title of The Tonight Show and the date on which Cardi B was on the show.