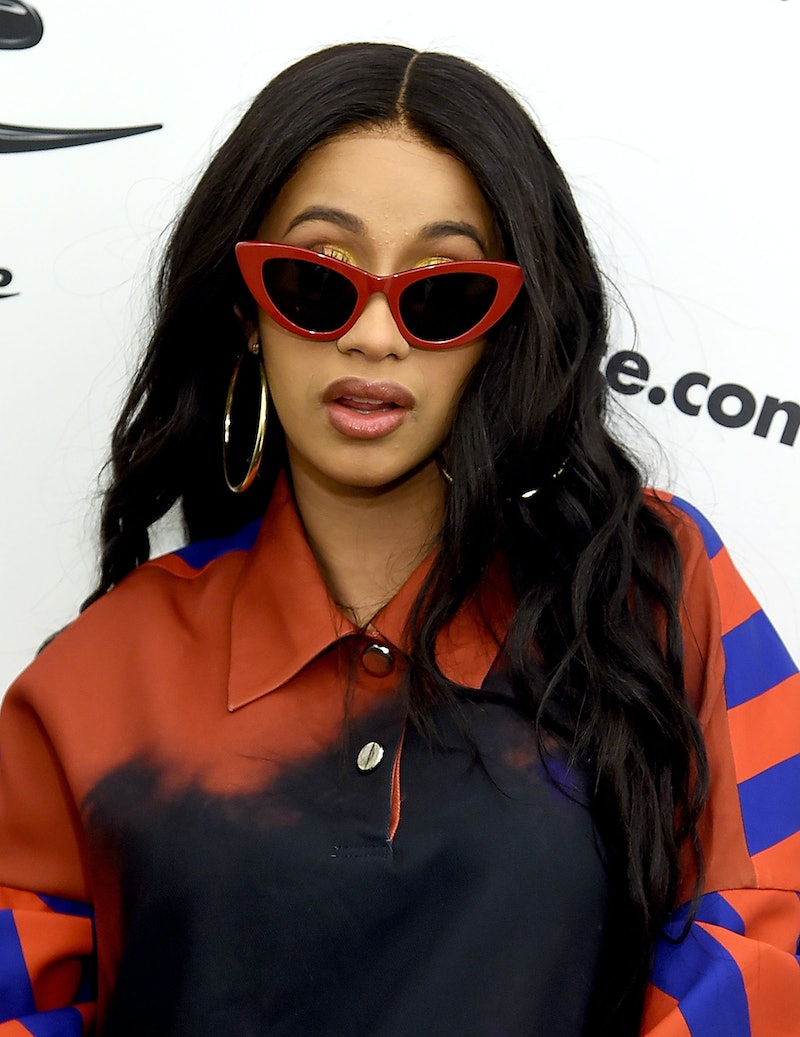 Some folks learned the hard way recently that no one should mess with Cardi B and her Lamborghinis. As E! News reported, Cardi B responded to those saying she leased her Lamborghinis. And wow, did she bring the receipts for those haters — literally.

The "Be Careful" singer first posted a photo of her new purchase on Instagram on July 28. Cardi and her husband Offset posed alongside "his and hers" blue and green Lambos, as one does on a Saturday afternoon. In the caption for the post, she wrote, "Blessed & Gifted ... Official Lamb owners @offsetyrn." Basically, they're busy living their best lives and you can't really blame them for being excited over the major purchase.

But there were some who chose to question the pair's Lamborghini-owner status. Some commented on the post and implied they're leasing the expensive cars, which is something that Cardi chose to acknowledge in another (since-deleted) Instagram post. According to E! News, the singer showed off the actual receipt for the cars in the video to dispel any rumors about the couple leasing the vehicles. The publication reported she also said in the clip, "If I'm going to rap about having a Lambo, I'm going to own a mother-f*cking Lambo."

Of course, the song she referred to is one of her newest singles, "I Like It," where she sings, "eatin' halal, driving a Lamb." So it seems like Cardi wanted to put her money where her mouth is by buying the car. And in the process, she managed to expertly call out some of the haters criticizing said purchase, which isn't exactly surprising to anyone who knows the hilarious and outspoken singer.

As one could probably guess, there isn't exactly space in a Lamborghini for a car seat fit for a little one. What would Cardi and Offset do if they want to travel with their newborn daughter, Kulture? The couple only recently welcomed their child on July 10, as the "Bodak Yellow" rapper revealed on Instagram. But you won't find the baby riding along in her parents' "his and hers" vehicles.

Cardi responded to one fan on Insta who posed a question about the car seat dilemma. As it turns out, the new parents have the whole thing handled. She replied with, "we got trucks to drive the baby in" along with a smiling emoji.

While some fans criticized Cardi's purchase by questioning whether it was leased, there were also those who had a good-natured concern for her. One user commented, "Now you just gotta learn to drive! But what a cool car to learn in." This is definitely in reference to the singer's interview on The Ellen DeGeneres Show from April in which she revealed that she didn't know how to drive. In fact, she referred to herself as a "professional passenger." Despite her lack of driving skills (at least at the time), she did reveal that she wanted a "Lamborghini truck" because she needs "a baby car."

Well, it appears that her wish came true. Not only did the new parents purchase some trucks to drive their child around, but they also purchased (!) some stylish Lambos for themselves to boot.