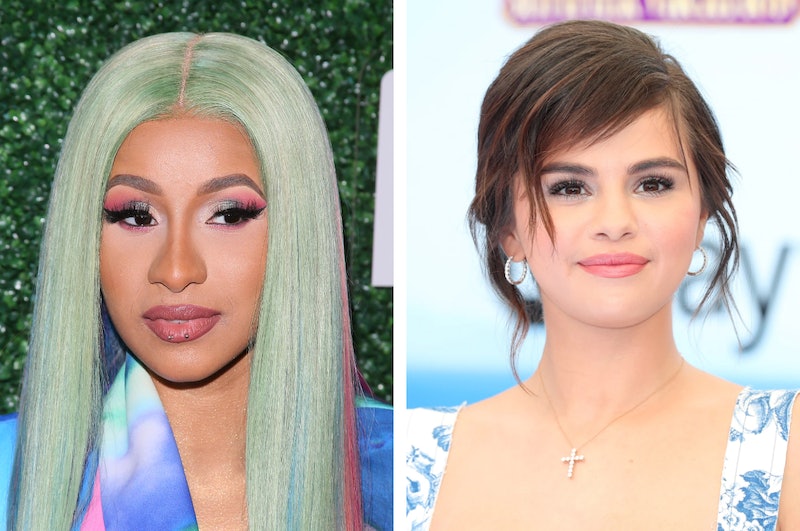 Music festival FOMO is real, and if you weren't already feeling it, well ... This just might make you really feel it. On Friday, April 12, fans got a super exciting surprise when Cardi B and Selena Gomez performed at Coachella, alongside their "Taki Taki" collaborators, DJ Snake and Mizuna, as People reported. It was a pretty major moment, no doubt about that. It also happened to be the first time Gomez had ever performed at the festival.

So, one of the reasons that this was a particularly cool surprise was because it was like, a slow-rolling double reveal, according to People and videos posted online of the performance. About an hour into DJ Snake's set, the producer started cranking up his hit track, "Taki Taki." Ozuna flowed through his verses first, and then — poof! — Cardi joined them on the stage.

The Bronx-born rapper was on-point, all-around. From her fringe-adorned outfit, to her waist-length, platinum blonde locks, to the way she sharply spit and hit each and every one of her lyrics — just ... so good. But wait — there's more!

Now, the crowd was already pretty hyped up after Cardi and Mizuna got through the chorus. Then, right before the third verse — which is Gomez's solo verse — DJ Snake grabbed his mic and announced, "Give it up for Selena Gomez!" *Screeching breaks* *Record scratch* *Hundreds of jaws drop to the floor*

People went wild when they realized that Gomez was actually, physically there. Seriously — the high-pitched shock-screams are very much audible in videos of the performance. Can you blame them, though? According to People, it's been nearly a year since Gomez has performed anywhere at all. The last time she sang on a stage was on May 2018, when she joined her pal Taylor Swift for a show during her Reputation tour. Other than that, she's been laying pretty low.

Also, while Gomez had been to Coachella before as a fan, she'd never been there as a performer until last night. Cardi performed her own set at the festival last year, but she was six months pregnant at the time, so this must have been a completely different experience for her.

Some of the fans that got to experience the star-studded "Taki Taki" performance took to Twitter to voice their reactions. "So DJ Snake brought out Ozuna, Cardi B AND Selena Gomez and it was honestly so magical and I lost my voice," one fan wrote. "Thank you @djsnake for making my Coachella dreams come true by playing Taki Taki live and bringing out the squad as special guests! Aka Cardi B, Ozuna, and Selena Gomez!!!" another fan tweeted. "I'm not gonna lie i actually daydreamed bout snake bringing Selena cardi & ozuna to perform takitaki at an award show lmaooo and now he did that at Coachella!!!! And they looked bomb asf," exclaimed a third.

The FOMO is definitely palpable now. What a moment. What a time to be alive. Think they'll show up for DJ Snake's set during the second weekend of Coachella, too? Fingers crossed.