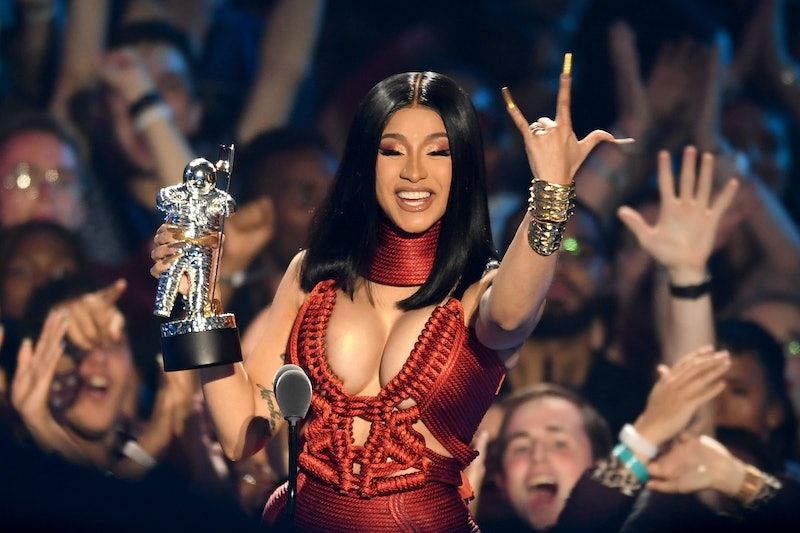 She may be a relative newcomer on the music and celebrity scene, but rapper Cardi B has steadily established herself as one-to-watch when it comes to fashion. She has cultivated a larger-than-life personal style and her fans love to see what she'll wear next. Cardi B's 2019 VMAs outfit was typical Cardi B. The rapper hit the ceremony in her signature grand style, wearing basically an embellished corset. Since her star remains on the rise and she notched four VMA nominations this year, she brought her fashion A-game to the big show.

Cardi B wore a red-hot corset dress that was all about the statement details. It included a built-in choker and long panels in the front and the back serving as the ensemble's skirt. She accessorized with thick gold cuffs on each wrist.

Since she changes her hair on the regular, fashion watchers were eagerly anticipating how Cardi B would style her strands and how that would factor into her overall look. She went with a chic and classic coif, with a center-parted, glossy, and angled lob that framed her face. She wore her locks blown stick straight.

Her makeup was as chic as her hair. She went with darkly rimmed eyes and nude lips. Cardi B can usually be counted on to rock statement manicures and that's exactly what she did at the VMAs. Her gold-dipped nails — done by Jenny Bui, using OPI Gelcolor in Dazzling Dew Drop and OPI Chrome Powder in Gold Digger — were so long they could have doubled as daggers.

Her 2019 look mashed up classic elements with some edge. Here's a head-to-toe view of Cardi B's presentation at the 2019 VMAs. It was a lot of look but that's what made it so awesome. There were several details that captured your attention. The built-in choker was reminiscent of her 2017 outfit.

This year's VMAs outfit was an excellent follow-up to Cardi B’s 2018 look. Last year, she rocked a purple, curve-hugging ruched velvet dress with a major slit. She also went with a gorgeous and Kris Jenner-like pixie that showed off her eyes and her neck. It was such a stunning presentation. It was also incredibly low-key by Cardi B standards. That's her thing, though. You learn to expect the unexpected when she shows up at a Hollywood event, and she never disappoints.

Flashback to Cardi's 2018 VMAs ensemble. The singer took a timeless silhouette and made it her own with the color and the fabric. Plus, the off-the-shoulder construction gave the frock a cape-like feel. Most people don't wear a cool weather fabric like velvet in summer but most people aren't Cardi B.

The rapper rocked a cream-colored pantsuit x dress hybrid with a built-in choker and bustier to the 2017 VMAs. It featured a perfect butterfly train. At first glance, it might have appeared to be a simple ensemble, but a closer inspection of the details proved it was anything but. This look had all the elements of a Cardi B look: cool, unexpected, and awesome.

This year marked another ace VMAs look for the one and only Cardi B. She has established that she doesn't play by anyone's rules but her own — when it comes to her art and her style.

More like this
Kylie Jenner Wore A Stunning Corset Dress For Paris Couture Week
By Dominique Norman
Important: Anne Hathaway Just Wore A Corset Puffer Coat As A Dress
By Dominique Norman
Twitter Memed Doja Cat's Red Schiaparelli Look & I Am Cackling
By Dominique Norman and Kelsey Stiegman
Beyoncé Wore A Golden Sheer Gown At Her VIP Dubai Concert
By Sam Ramsden
Get Even More From Bustle — Sign Up For The Newsletter
From hair trends to relationship advice, our daily newsletter has everything you need to sound like a person who’s on TikTok, even if you aren’t.