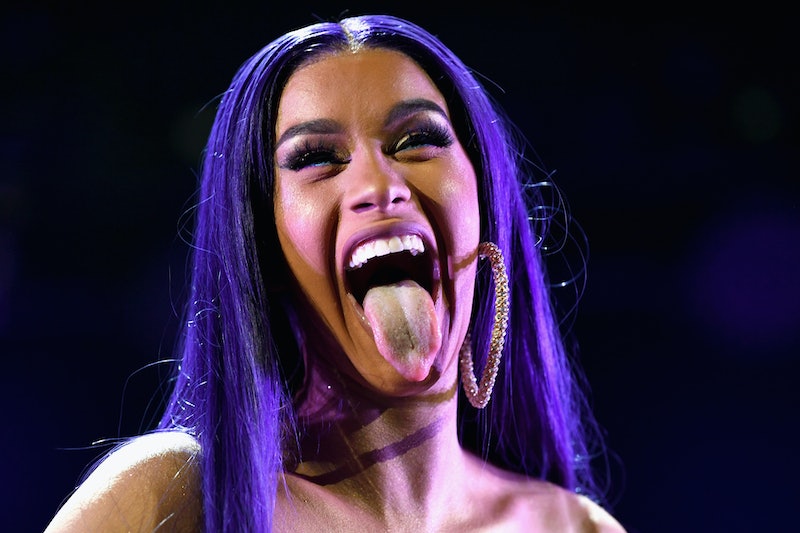 One star is about to make her feature film debut, but the role she's playing won't be much of a stretch (which means that she'll nail it, obviously). On Sunday, June 9, Cardi B shared a photo from the Hustlers set, as Entertainment Tonight reported. Her character, Diamond, is a stripper, which is a profession that Cardi, herself, knows quite well.

Back in March, it was announced that Cardi would be joining the cast of Hustlers. While speaking to ET about the film in early May, the rapper explained why the role was such a big deal for her. "Even though my schedule's busy it's, like, I had to be in this movie. This movie is something I can relate [to]," she told the outlet. "All the actress in the movie I can tell them, like, 'No, no, no. This is how it goes' ... The club that the movie is based on, that’s the first type of club that I worked in. This was my life."

In the pic Cardi recently posted from the dressing room of the film, she's decked out in a neon pink and blue mesh leotard that ... well, let's just say that it leaves little to the imagination. Her long, pointy acrylic nails are coated in bright yellow, and the silver platform heels she's wearing are intimidatingly tall. She's also got these like, criss-cross garter-esque matching silver straps wrapped around her legs, which include little star accents throughout.

"Y’all ready for DIAMOND to come to a theater near you this fall ?" she captioned the shot. "HUSTLER MOVIE !" Yes, Cardi, we are definitely ready.

Cardi's own, real-life experience as a stripper will undoubtedly add an extra layer of realism to her Hustlers role. She's long-been outspoken about her past on the pole, and has argued that its a job that deserves way more respect than its typically given.

"People say, 'Why do you always got to say that you used to be a stripper? We get it,'" she said during an interview with Cosmopolitan back in February 2018. "Because y’all don’t respect me because of it, and y’all going to respect these strippers from now on. Just because somebody was a stripper don’t mean they don’t have no brain."

Cardi started stripping at the age of 19, and gradually worked her way into some of New York City's finest gentleman's clubs. She'd end up building a significant social media following during this time, and was never shy about touting the motivation behind her chosen profession.

"People be asking me, 'What do you does?'," Cardi laughed in one video that has long-since been deleted (as per The Fader). "'Are you a model? Are you, like, a comedian or something?' Nah, I ain’t none of that. I’m a hoe. I’m a stripper hoe. I’m about this shmoney."

And get that shmoney she did. Cardi's celebrity blew up after she was cast on the reality show Love & Hip Hop: New York. She maintained her job as a stripper while they filmed, but also got to showcase her skills as a rapper. The rest, as they say, is history, and now — after basically owning the hip-hop charts for nearly two years — she's about to star in her first feature film.

Hustlers hits theaters in September, so you'll have to wait a while longer before catching Cardi as Diamond. Fingers crossed that she gives us a few more glimpses in the meantime, though.